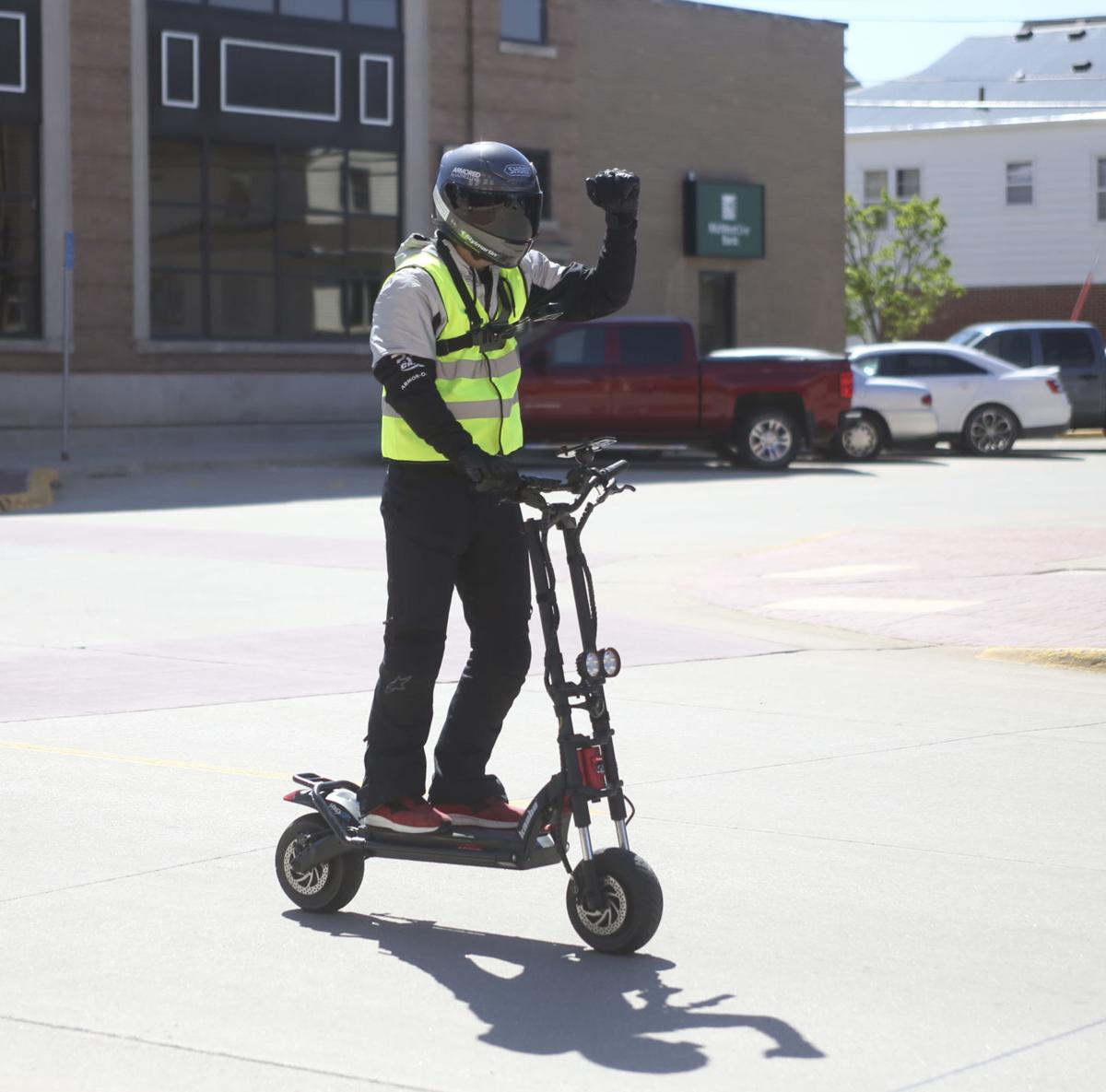 Alex Simon rides into Dyersville, May 5, on his electric scooter during his coast-to-coast journey on Historic US 20. 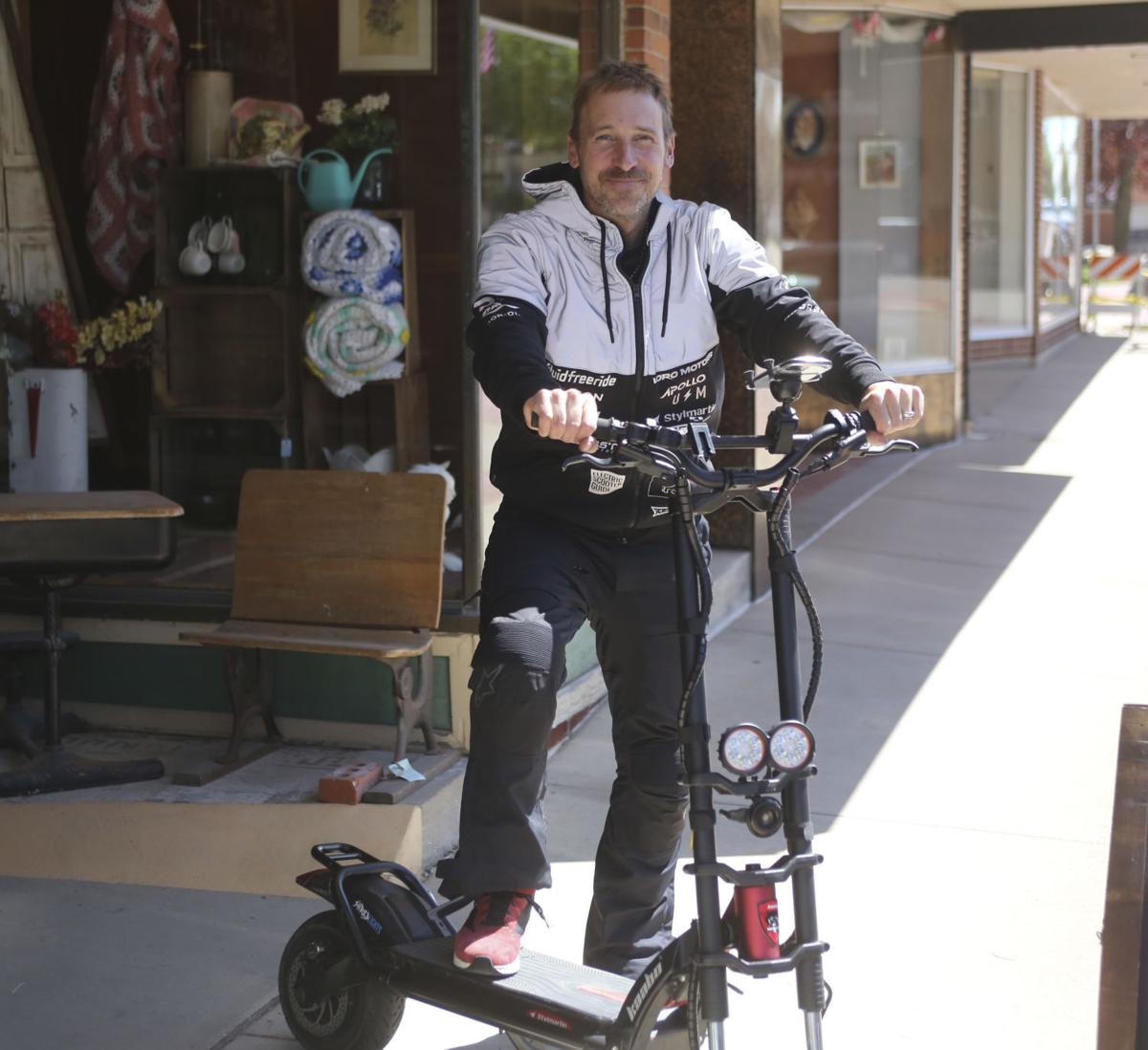 Alex Simon poses in Dyersville, May 5, with his electric scooter during his coast-to-coast journey on Historic US 20.

Alex Simon rides into Dyersville, May 5, on his electric scooter during his coast-to-coast journey on Historic US 20.

Alex Simon poses in Dyersville, May 5, with his electric scooter during his coast-to-coast journey on Historic US 20.

Traveling coast-to-coast is an adventure anyway you look at it, but making the trip on an electric scooter adds just a bit of an unusual twist to the journey.

That’s what Alex Simon, a native Brazilian who has lived in the United States for 30 years, is doing this spring. Simon took a brief break in Dyersville during the Eastern Iowa leg of his trip, May 5, on his way to an overnight stop in Waterloo.

“It’s been tough weather so far. I’ve encountered a lot of rain and cold weather, but it’s been getting better as I head west,” Simon said while taking a break in downtown Dyersville. “I’ve had a mix of good roads and bad roads, a lot of traffic and little traffic. I’ve seen some beautiful sights in Massachusetts, the Finger Lakes, in New York and Amish Country.”

Simon explained his stable of vehicles can travel up to 50 miles per hour, but as with any vehicle, economy is part of the equation.

“Because I need to preserve battery life, I only go about 25 mph on average,” said Simon. “On most of my scooters, I get between 20 and 25 miles out of a charge. I have nine scooters and use between five and seven each day.”

Simon’s adventure is his way of continuing the work of his father — a prominent agronomist in Brazil — who passed away, in November of 2020. Simon decided to continue his father’s legacy by combining adventure and eco-activism.

“I realized my own efforts in saving the planet had been underwhelming. I needed to do better and wanted to do better,” Simon said. “I wanted to honor him by doing something big and impactful. That’s when ‘Scoot America’ was born.”

“The trip has one major purpose — to let people know about the benefits of micromobiles,” he added. “What are micromobiles? Think of transportation that is small and electric that can be used to replace cars on short trips.”

Simon’s original plan was to reach the West Coast May 21, but after taking a closer look at things, decided to add a few days.

“I realized some days were about 160 miles, which we discovered was way too long,” he said. “We added a couple extra days and spread out the miles. Now it’s going to be about a 30-day trip.”

Simon is traveling the entire length of Historic US 20, and explained the route was a logical choice.

“US 20 is the one road that can take me cross country the entire way. 3,365 miles on one road makes it easier logistically,” said Simon. “I also connected with Brian Farr, who runs Historic US 20 and he’s actually my support driver. Who better to show me the beautiful sights along US 20 than him?”

“I started in Boston, went through Albany and Buffalo, New York, Erie, Pennsylvania, Cleveland and Chicago — which was busy,” he said. “I met some wonderful people and it was nice.”

Simon has enjoyed the Eastern Iowa portion of the trip and expressed excitement to see the rest of the state.

“I’m happy to be in Iowa. This has been by far the best weather day,” said Simon. “This is day 12 of the trip and I hope the good weather continues.”

“I’ve really enjoyed 20. It’s so beautiful and so much of the nation’s history is from the northern part of the country. This has been educational, adventurous, fun and challenging. It’s been everything I thought it would be.”

Simon has an easy, personable manner, and has enjoyed seeing the country from a new perspective.

“I’m asked about the most exciting part of the trip and it really is the people,” Simon said. “I meet people and talk about the cause and everyone is curious about the scooters. They welcome me just like I’m being welcomed in Dyersville. By far the highlight of the trip is the people I’m meeting along the way.”