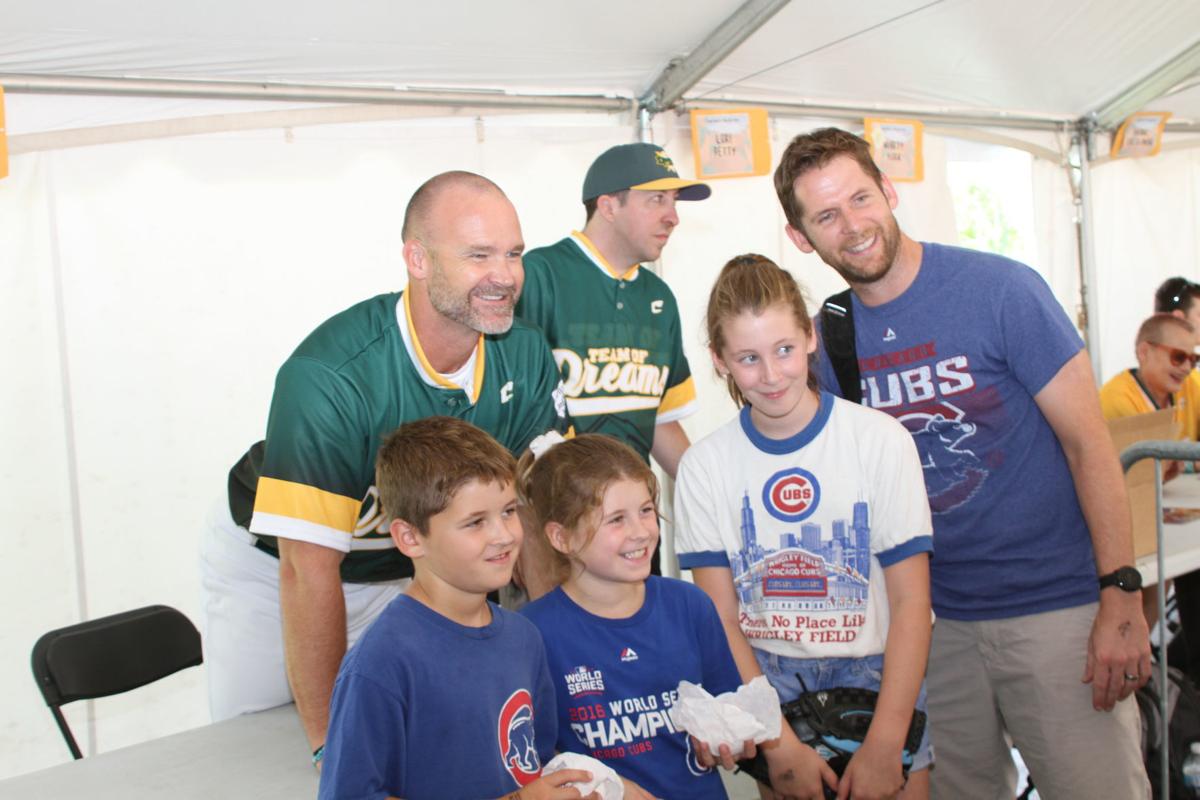 David Ross poses for a picture with the Mamminga family from Geneva, Ill. In from from left are Ryan, Elena, Amber and Bob Mamminga. 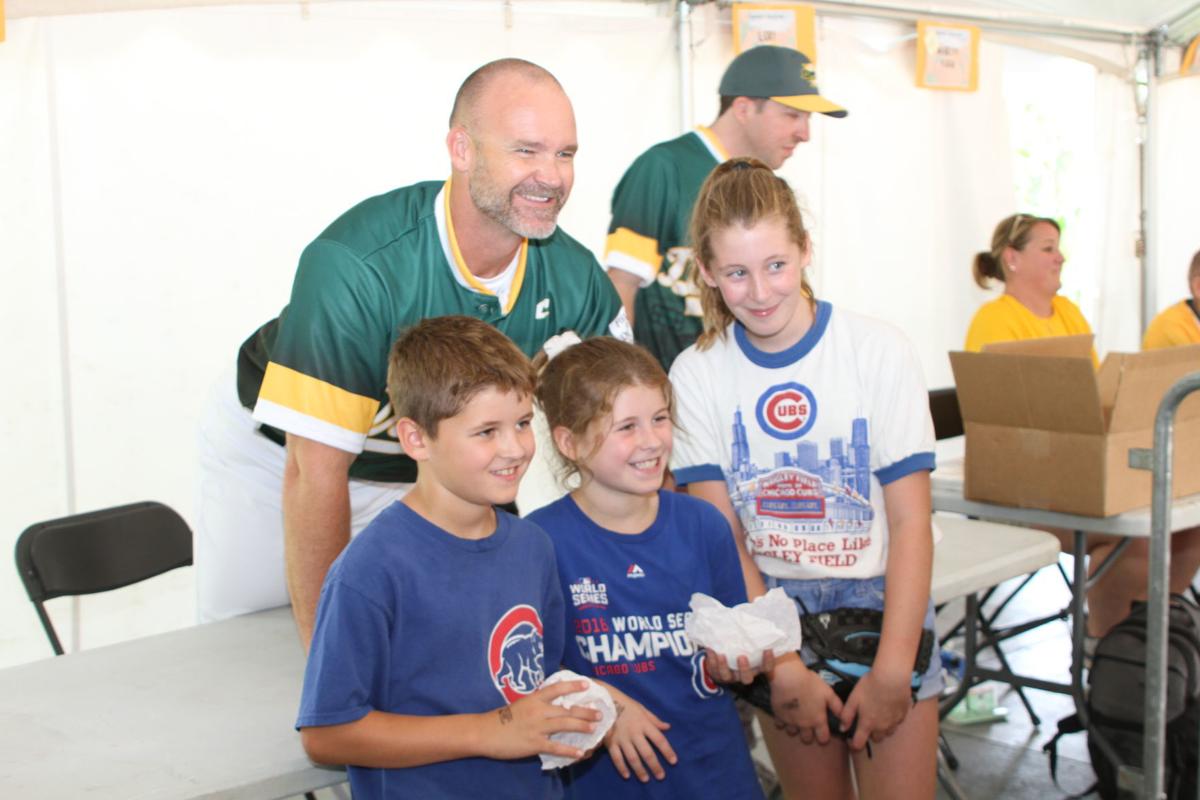 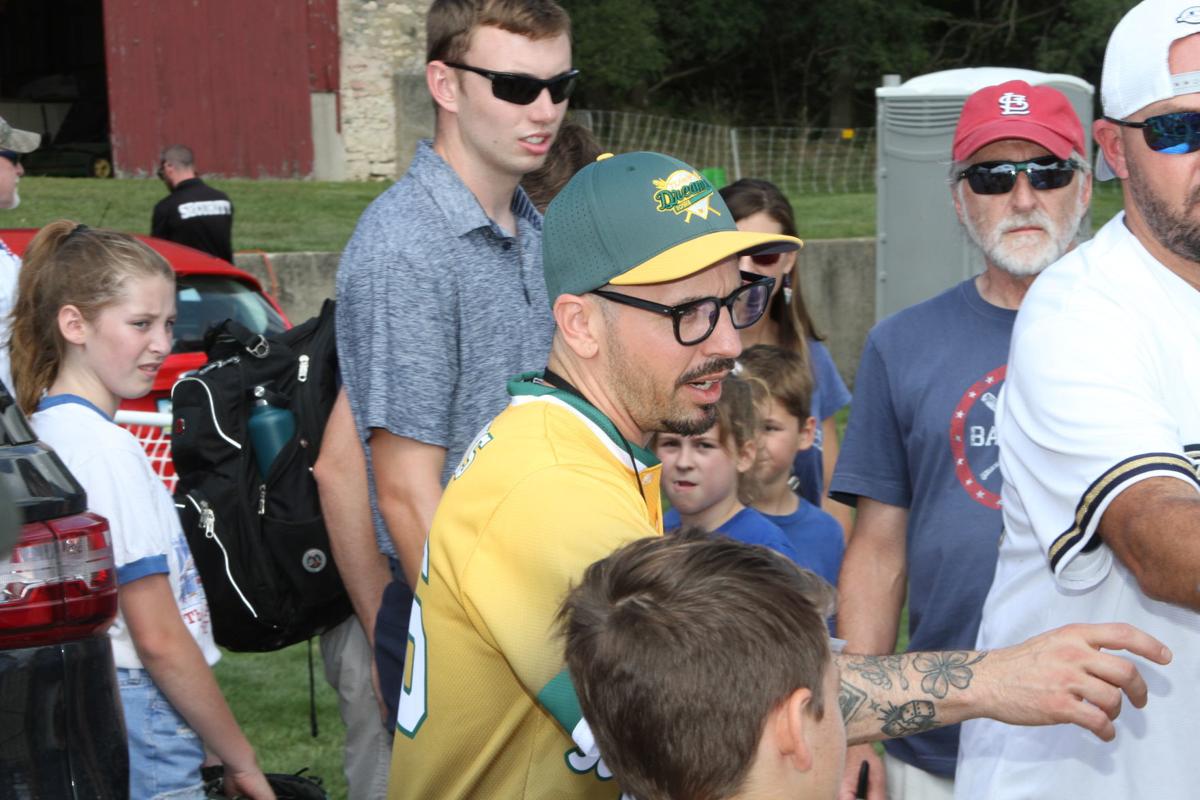 Chauncey “Squints” Leopardi mingles with fans at the Field of Dreams.

David Ross poses for a picture with the Mamminga family from Geneva, Ill. In from from left are Ryan, Elena, Amber and Bob Mamminga.

Chauncey “Squints” Leopardi mingles with fans at the Field of Dreams.

Bring in several baseball Hall of Famers, throw in stars from a pair of iconic baseball movies and add a picture-perfect fall day. That was the recipe for success at the Team of Dreams event at the Field of Dreams Sept. 1.

Actors from “The Sandlot” and “A League of Their Own” were also on hand for the day.

Ross, who played for several teams during his 15 years in the majors, may have edged out Ozzie Smith for the most popular player at the field this year. Ross’s final two season were with the Chicago Cubs, where he was a member of the 2016 World Series Champions.

Ross’s lines for photos and autographs stretched outside the tents, with many fans sporting Cubs apparel as they waited for their time with Ross.

Among those fans were Bob and Jen Mamminga and their children, who had come to the field from Geneva, Ill. It was the family’s first trip to the Field of Dreams.

“We like Ross,” Bob Mamminga said. “He was the draw for us today. We are a family of Cubs fans. We have been collecting autographs from the Cubs 2016 World Series team and he’s on our list. So far we have about 15 autographs from that team.”

The Mamminga’s three children, Amber, 12, Elena 10, and Ryan, 8, enjoyed the day at the field. “The kids are into baseball,” Bob Mamminga explained. “They saw the movie a couple of years ago and this seemed liked a pretty good Labor Day activity for our family. We really like the field.”

The field left an impression on Edmonds as well. Now working as an assistant to the president of the St. Louis Cardinals, Edmonds made the trip with his two children.

“I’ve been staring out at this field all day long. There are all these kids out here playing catch and just having a blast,” he said. “I told my son he could go out on the field and run around. I was just going to the front porch and sit for a couple of hours and chill and watch the sights. This is so incredible.”

Edmonds continued, “This is such a special place in everyone’s hearts. Even if you haven’t seen the movie, if you come here you can’t help but understand what it’s all about.”

Later in the afternoon, Boddicker and Ross answered questions put to them by announcer Dennis Rima as well as from members of the audience.

Boddicker was asked for advice for kids who want to become pitchers. His advice was simple. “Baseball is a blast. Have fun. That’s the biggest thing in baseball. I’m born and raised in Iowa. Most of what I learned about playing baseball I learned in this state. I’m from Norway, which has 500 people. We had five baseball diamonds. We’d play ball day and night. Find a bunch of guys and go play. That’s where you learn the most. You’ll learn about yourself and you’ll learn about your friends.”

Ross was asked about the rain delay in Game 7 of the 2016 World Series against Cleveland. Tied 6-6 in the 10th inning, the teams sat through a 17-minute delay.

“Jason Heywood got the team together,” Ross explained. “He talked about us being the best team in baseball all year. He reminded us that we played for each other, that we enjoyed each other and that we loved each other. A lot of guys came out of that delay focused. It got our minds back where they needed to be.”

The father-son theme of “Field of Dreams” also came out during the question and answer session when Ross was asked if he ever felt like quitting the game.

“I was struggling in Class A ball in Florida. I called my dad and told him I didn’t think this was for me. Thank goodness he talked me into finishing the year. Thank God for Dad.”

As for the softball game, The Shoeless Joe team defeated the Moonlight Graham team 10 and a half to 6. Only in a game with the cast of “The Sandlot” could a team score half a run.

For actor Chauncey Leopardi, who played Squints in the 1993 movie, his first trip to the field was a memorable one.

“This place is amazing. It’s really beautiful.” Leopardi, who answered to Squints all day long, said the response to “The Sandlot” never surprises him.

“The movie has held up really well over the years. In fact, it’s gotten stronger. People have a heartfelt response to it. To be out here today is great. Everyone is smiling and happy. It’s cool to be part of something that makes people happy.”

"Even if you haven’t seen the movie, if you come here you can’t help but understand what it’s all about.”