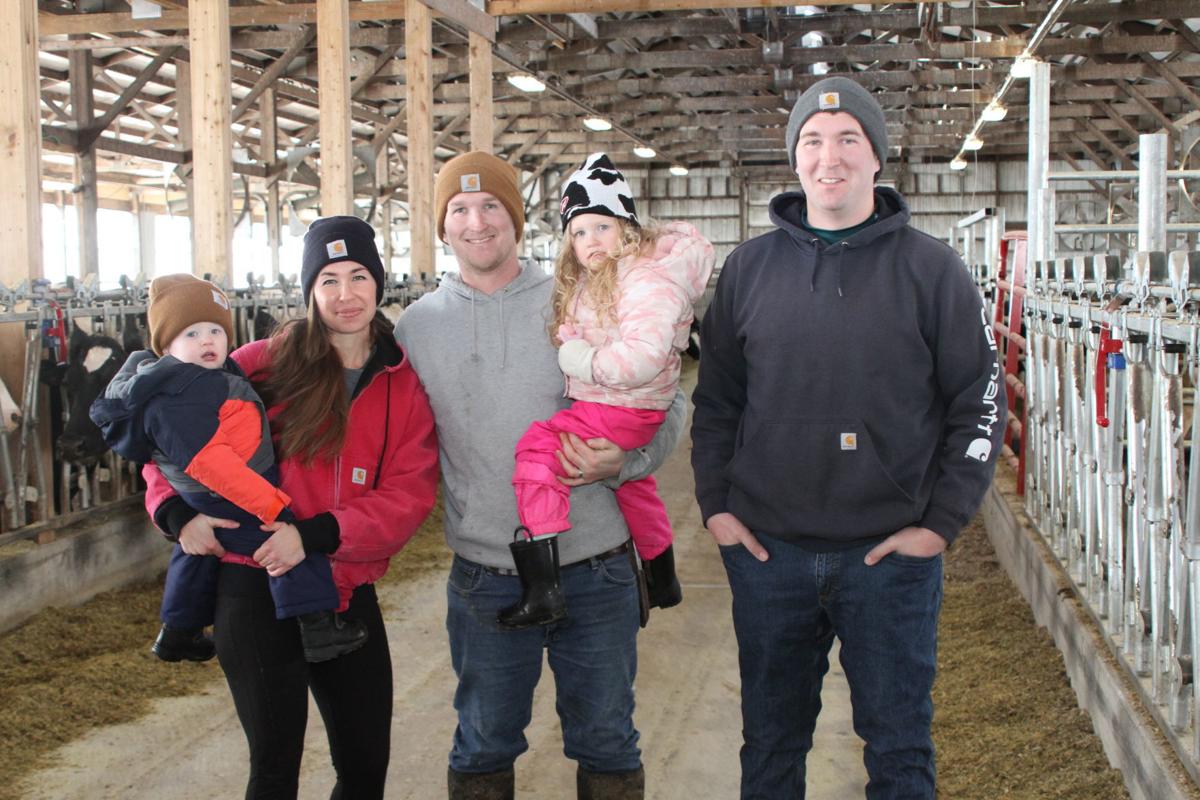 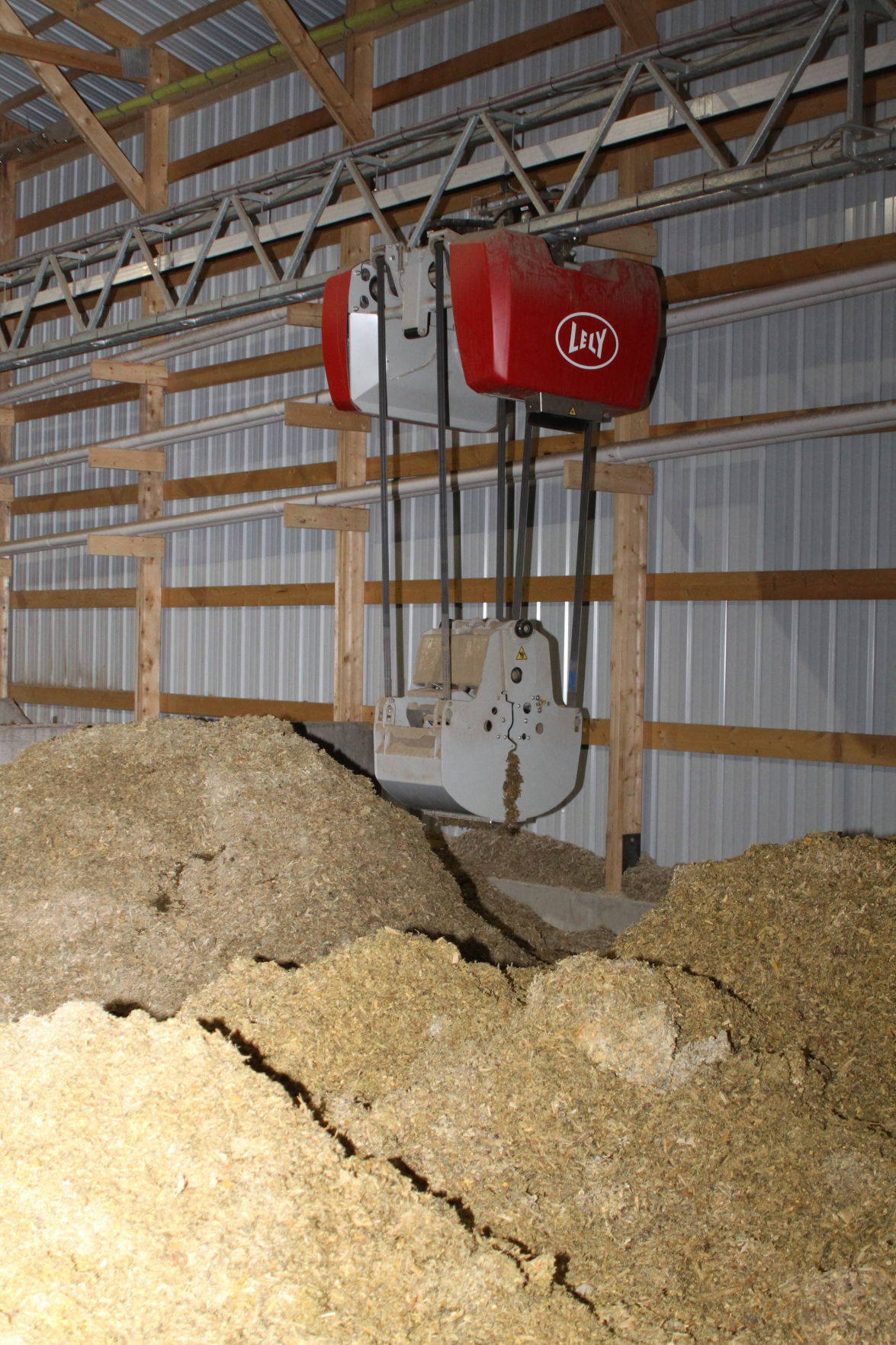 The robotic bucket picks up feed from a bunker. 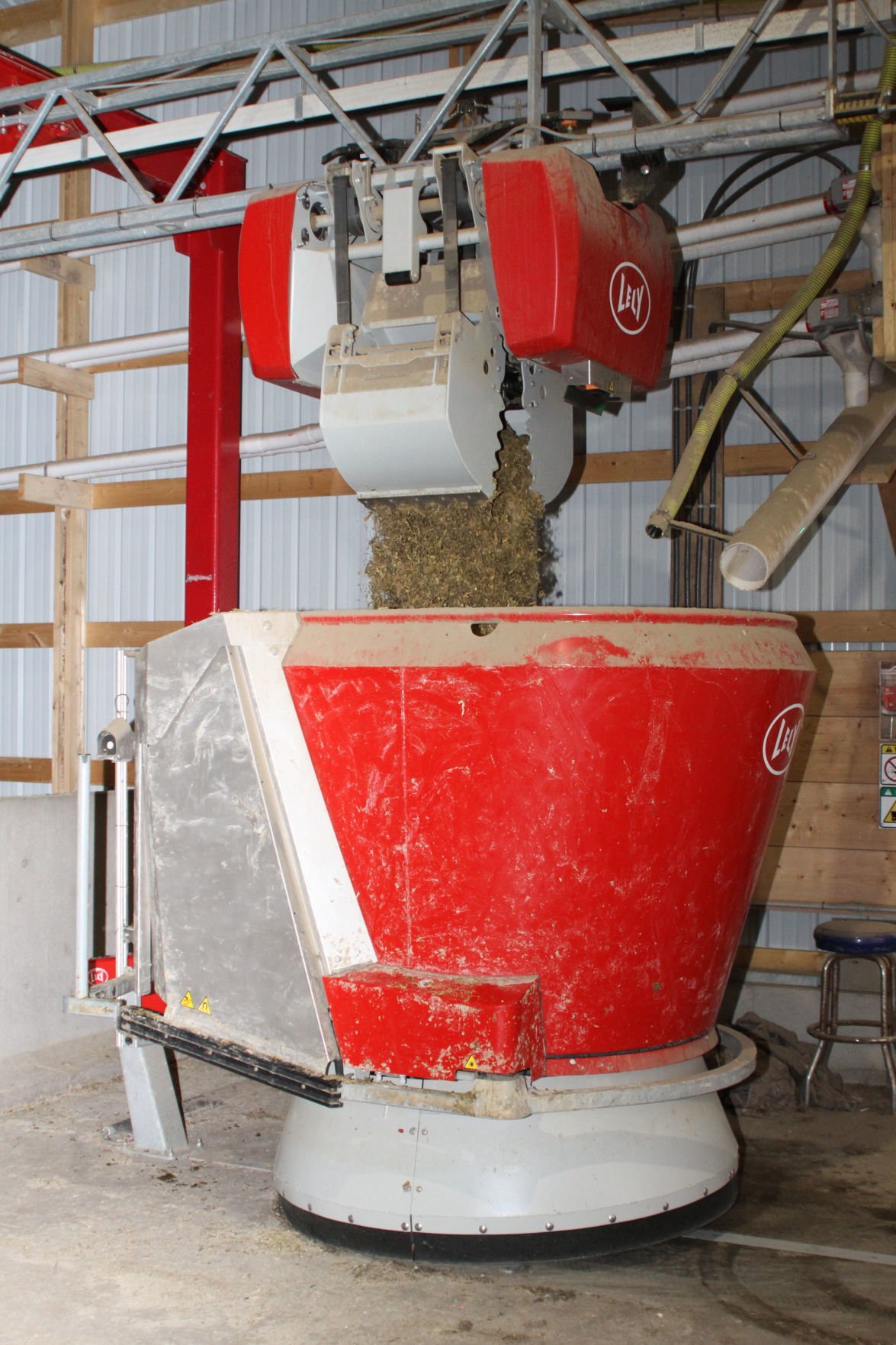 The bucket drops feed into the robotic mixer/feeder at Honey Creek Dairy. 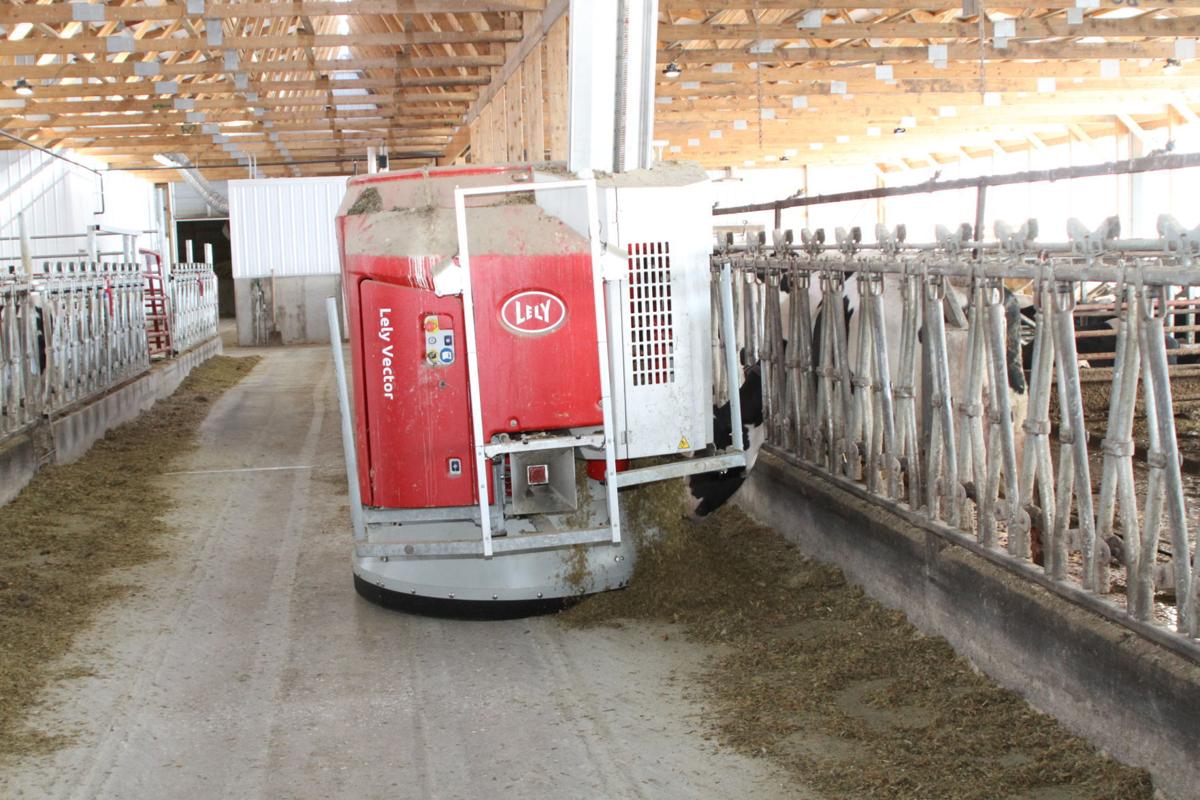 The automatic feeder sweeps feed back to the gate so dairy cows can reach it. 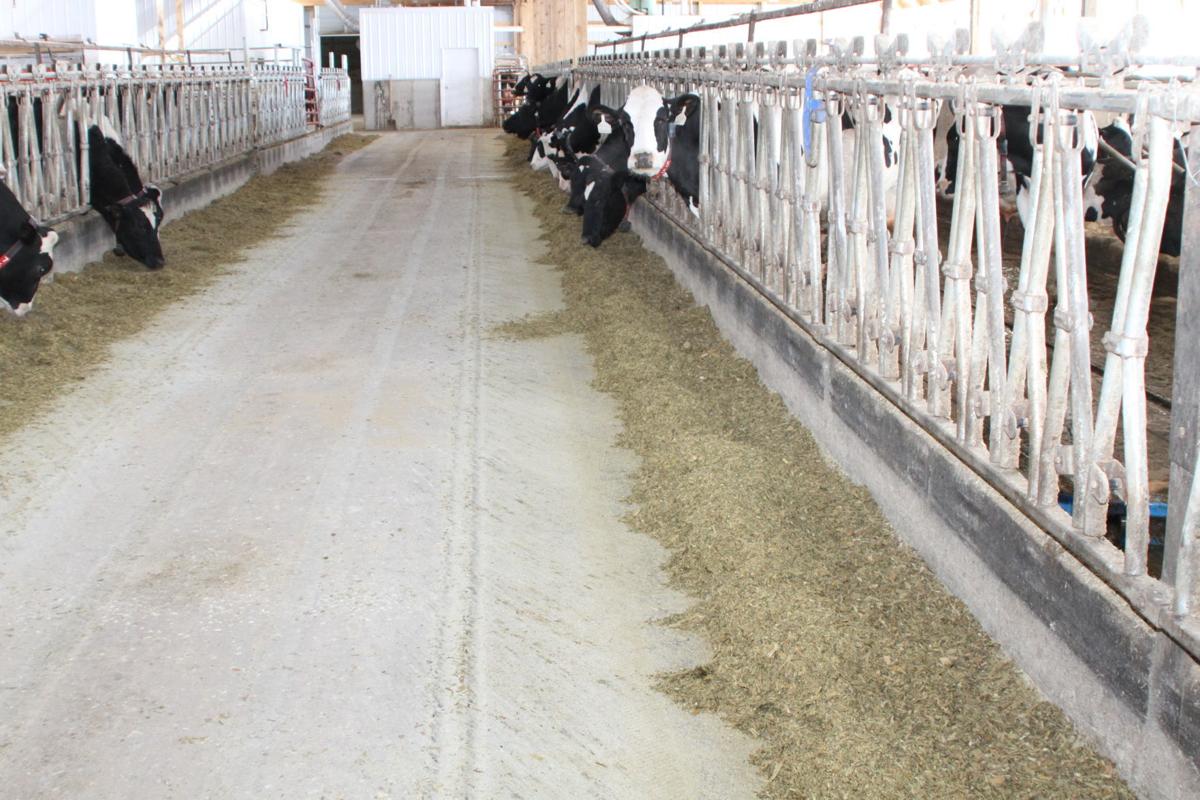 Following a pass from the robotic feeder, the depth and amount of feed is perfectly placed according to calculations put in the computer.

The robotic bucket picks up feed from a bunker.

The bucket drops feed into the robotic mixer/feeder at Honey Creek Dairy.

The automatic feeder sweeps feed back to the gate so dairy cows can reach it.

Following a pass from the robotic feeder, the depth and amount of feed is perfectly placed according to calculations put in the computer.

While the owners of Honey Creek Dairy, west of Edgewood, are using state-of-the-art equipment for their dairy operation, they also have a solid base in cow comfort that began from generations of dairymen who farmed before them.

Dan Venteicher, along with his wife, Jamie, and his twin brother, Don, are fourth-generation owners of the farm. It was begun by Dan and Don’s great-grandfather, Anton, in 1948, continued by their grandfather, Paul, then by their father Richard, and uncle Dave.

While the family tradition of dairy is strong, the latest edition of Venteichers are using robot milkers and a robot feeding system. The results are increased milk production and less time spent feeding livestock.

The Lely Vector robotic feeder the owners installed in December 2019, has produced some pretty drastic, immediate results. The feeding system runs 20-22 hours a day, delivering a set amount of feed to the operation’s herd.

“We saw a four-pound milk increase after just a couple of days when the robot feeder went in,” Dan Venteicher said. “We also saw a bit more butterfat, which pays a lot of bills right now. We’re just making better milk instead of more milk.”

The feeder fills itself from different commodity bays that the Venteichers call “the kitchen.” The kitchen is filled with different ingredients. “In those bunkers are corn silage, which is closest to the mixer because it’s grabbing that most frequently,” Dan Venteicher explained. “Next we have haylage, after that is cottonseed and sorghum, which is a good dry cow feed, then straw that is put in the dry cow rations.”

A grabber moves to the bunker it’s been programmed to go to, picks up a pre-determined amount of ingredient, then returns to the mixer and dumps it in. Liquid whey is added to the mix before the mixer takes it out to the cows for dumping.

A laser helps the mixer know where to go and how much feed to dump. “When it goes around, it has a route. We have different fences on that route,” Dan Venteicher explained. “When it goes by every fence, it will measure the height and inches of how much feed is there. We tell it however many inches of feed we want every fence to have. If that fence falls under that threshold, it will come back to the kitchen, mix it and fill it, then come back and distribute that ration at that fence.”

Instead of being given fresh feed once or twice a day, the system now delivers fresh feed in two or three-hour intervals, depending on the cows’ needs. That frequency, according to Dan Venteicher, is responsible for increased milk production.

“It’s the exact same diet as before we had the robotic feeder. It’s just getting dumped more frequently. We know cows respond to fresh feed dumps. Before this, I’d usually dump once a day in the winter and twice a day in the summer. Every time I would dump, cows would come up to eat. Now when it dumps every two or three hours, a few cows come up to eat. We know intake drives milk production. So by increasing their intakes a little bit, we have been able to drive up milk production.”

He said increased feeding frequency also keeps the cows more comfortable. “Before the robot, cows would often come up and eat more than they should in one feeding because they felt a bit of competition to eat as much of that fresh feed as possible. Now that they know it’s coming every two to three hours, they don’t feel the bunk competition to fight and try to eat as much as they can. Now it’s more of a natural pattern. They are eating more frequent, smaller meals throughout the day.”

The move to the robotic feeder has also saved time. “Before the system, I was spending close to three and a half hours doing this if it was a good day,” Dan Venteicher explained. “Now I spend 45 minutes to an hour a day and that’s it.”

He said the robotic system made financial sense for Honey Creek Dairy. “When we went to the robotic milkers, it’s a huge advantage to a feed pusher. That would have been another investment for the cows we gained. With the expectation of increased milk production, we would have needed a bigger tractor and bigger mixer. By the time we spent money on all that, we were over halfway to the investment of the robotic feeder. Those other things didn’t really gain us the milk and time efficiency like this does.”

Along with the feeder system, the Venteichers added three Lely A-5 robotic milkers for their herd of 180 milking cows. The milking system began Jan. 7, with Dan Venteicher admitting it took some time to train the cows to walk into the units when they needed milking.

“Lely gives you a rule of three days, three weeks and three months,” he said. “The first three days are exciting because you are just getting started. We probably had five people in the barn on average 24-7 that first week. Once we hit that two to three-week mark, that’s when it mentally wears on you. We move cows in groups around the barn, making sure every cow was coming in three times a day. Eventually, we trusted the cows to come on their own. At first, about 60% still weren’t, so we were walking through pens finding those cows and bringing them up.”

A more normal routine returned after a while. “We’ve been able to lay off the night shift and get a full night’s sleep,” Dan Venteicher said. “We’re getting to the benchmark Lely predicted for us.”

The move to robotic milkers by the Venteichers was in response to the future. “Dad (Rich Venteicher) needs to slow down a bit. He was putting in eight hours a day in the parlor,” Dan Venteicher said. “The hours he was spending he was getting to where he wasn’t able to do it anymore. It made more sense to put the money toward automation instead of hiring a couple of part-time people or maybe a full-time person. The goal is for my brother and me to be able to do all of this ourselves with the help of Jamie. The end goal is to do this with two families.”

And while that goal involves automation going forward, Dan Venteicher said the lessons and legacy of generations before him still resonate on the farm.

“Grandpa and my dad have always done a good job of trying to focus on what was going to be best for the cows. That’s what got us everything to where we are.”

He said the success of Honey Creek Dairy will be a combination of new practices as well as established norms for caring for a herd.

“A lot of practices stay the same when it comes to stewardship. But what has really helped us get to the production levels we are seeing are the smaller things outside the cow, like nutrition and forage quality. That’s given us more milk. But we can’t get those pounds of milk and the cow comfort if we’re not doing what Dad and Grandpa did when it came to caring for the cows.”

He continued, “We’re excited. We’ve hit our production benchmarks to help pay for this. The cows are at 95 pounds of milk. We are more than happy with that. It’s been very exciting to save some time and allow us to be able to have a home life. That’s been a nice change.”