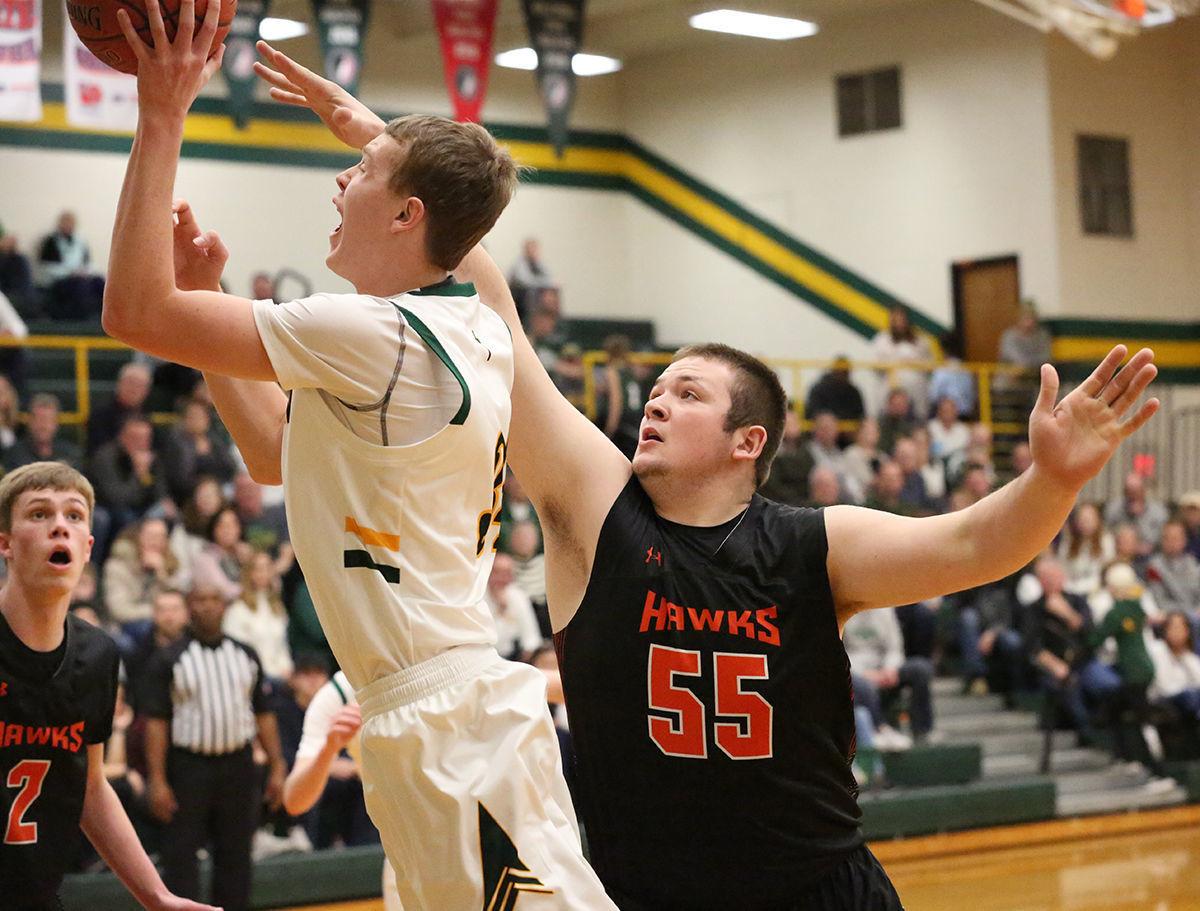 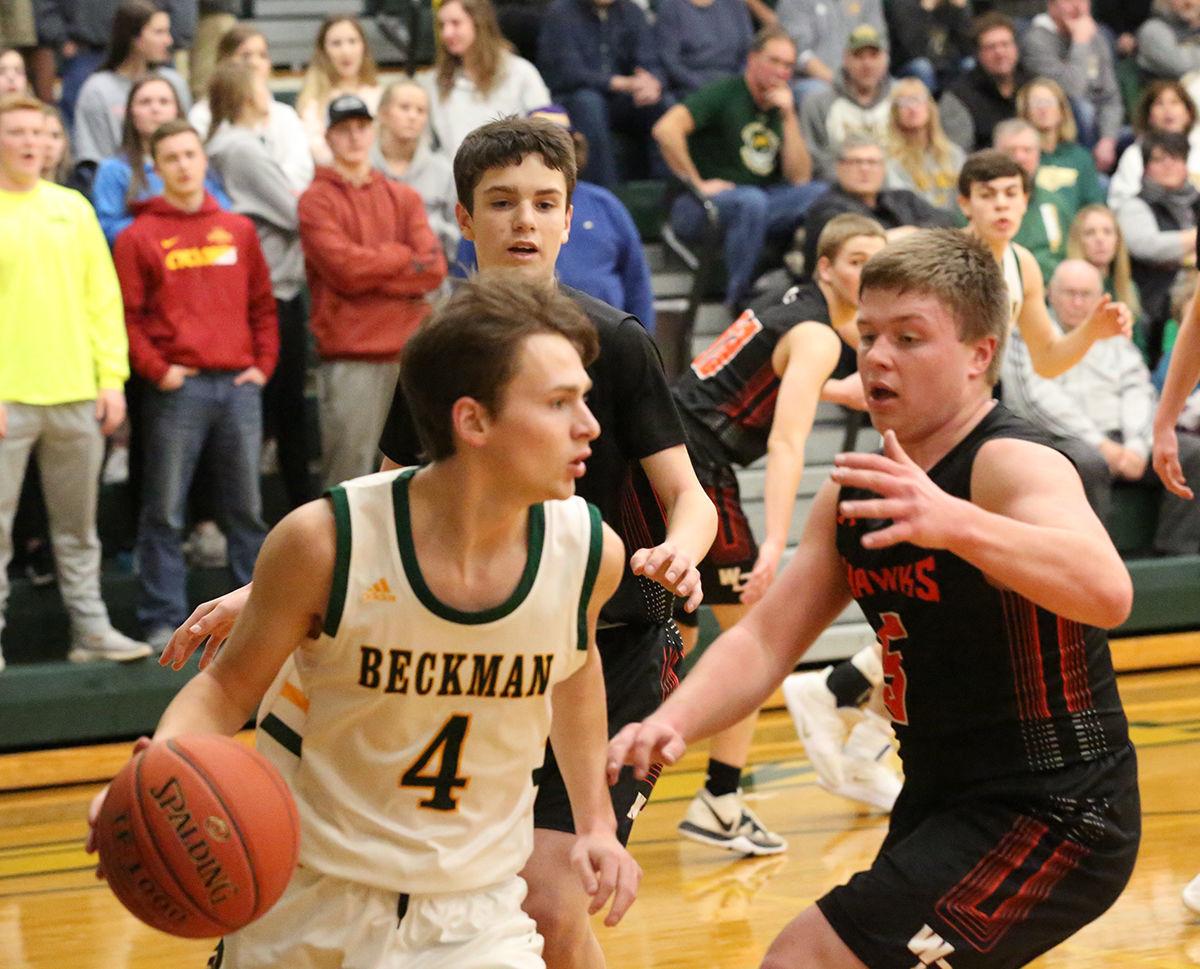 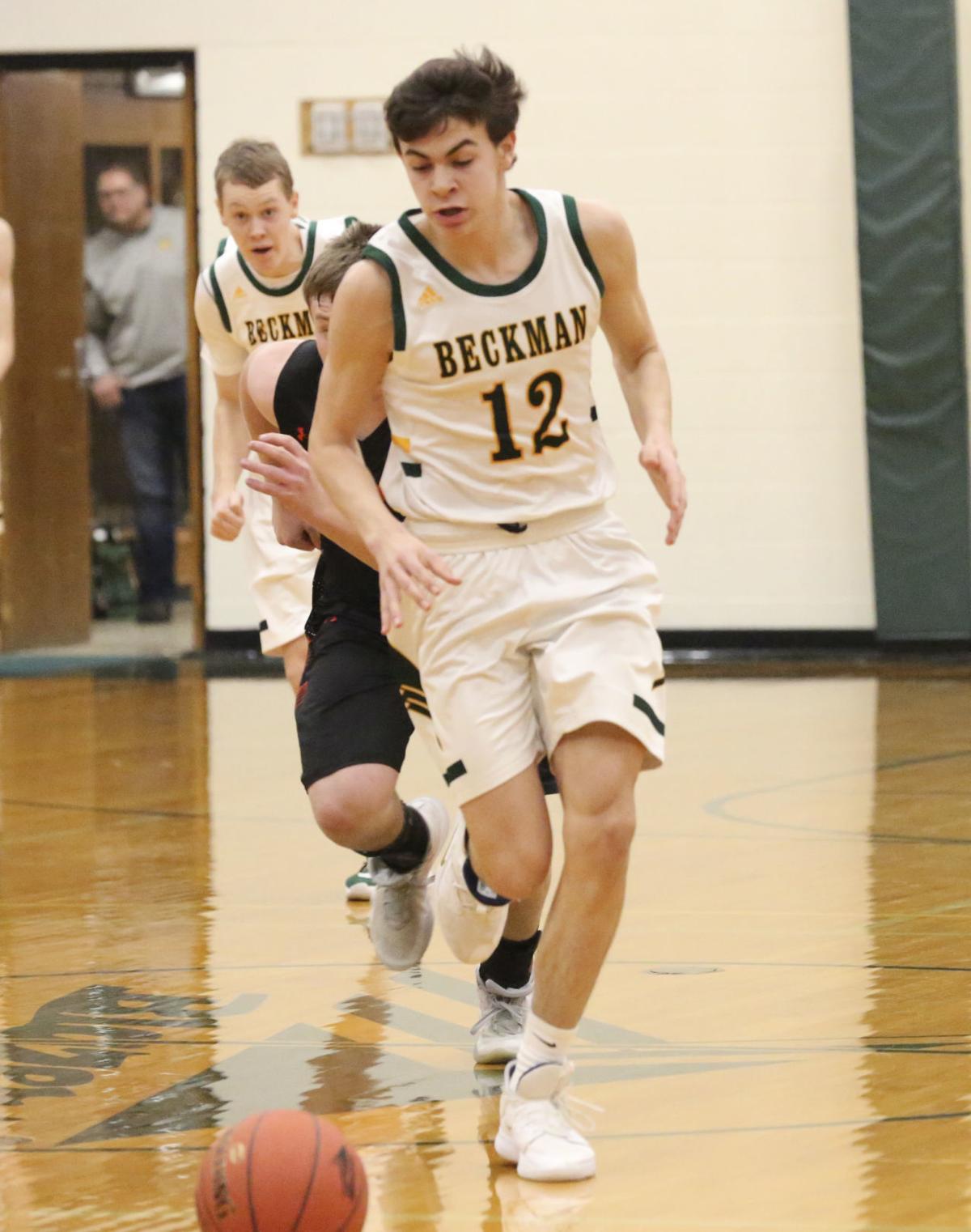 Mason White got the steal and follows the ball down the floor during their game with West Delaware jan. 21. 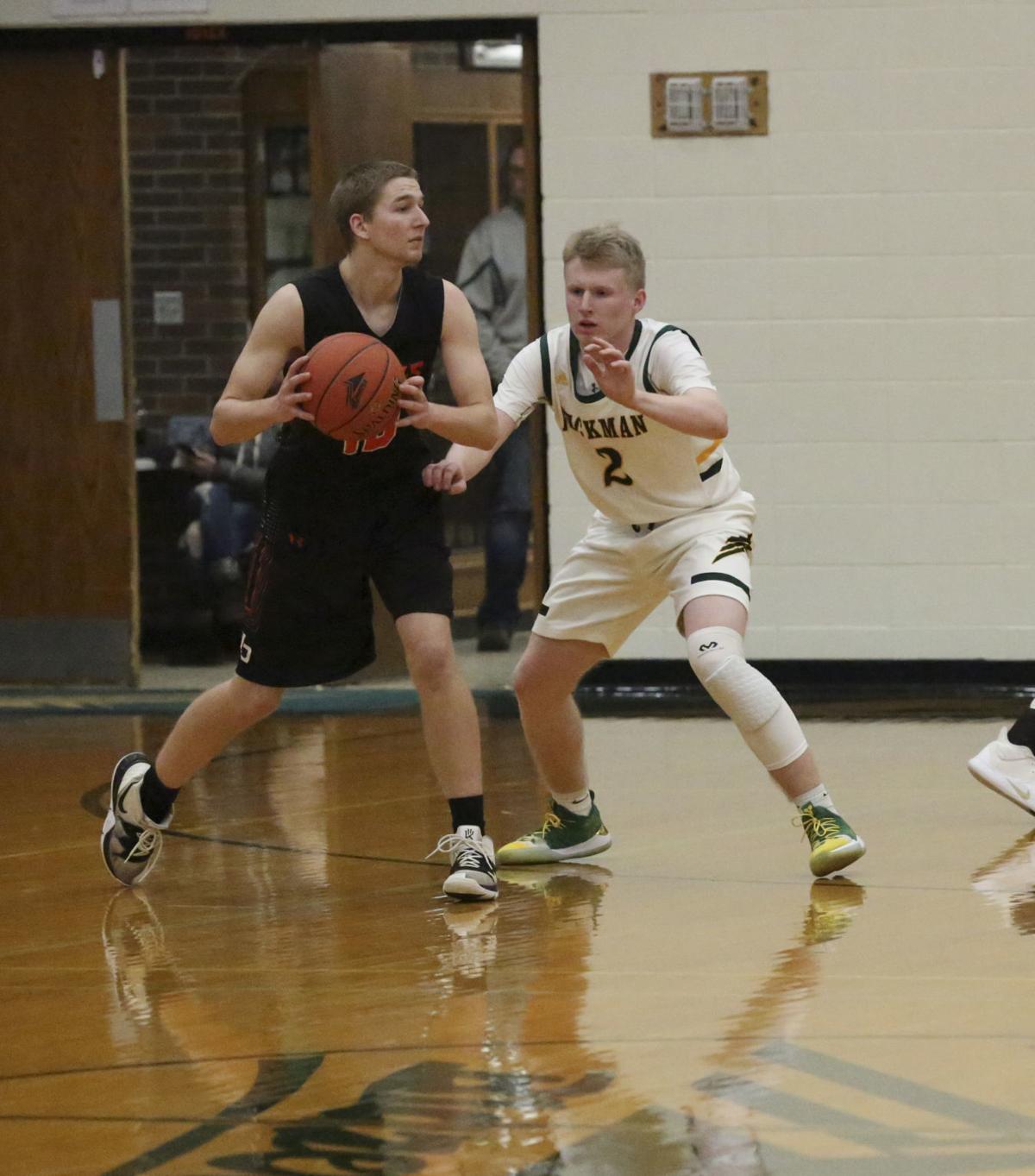 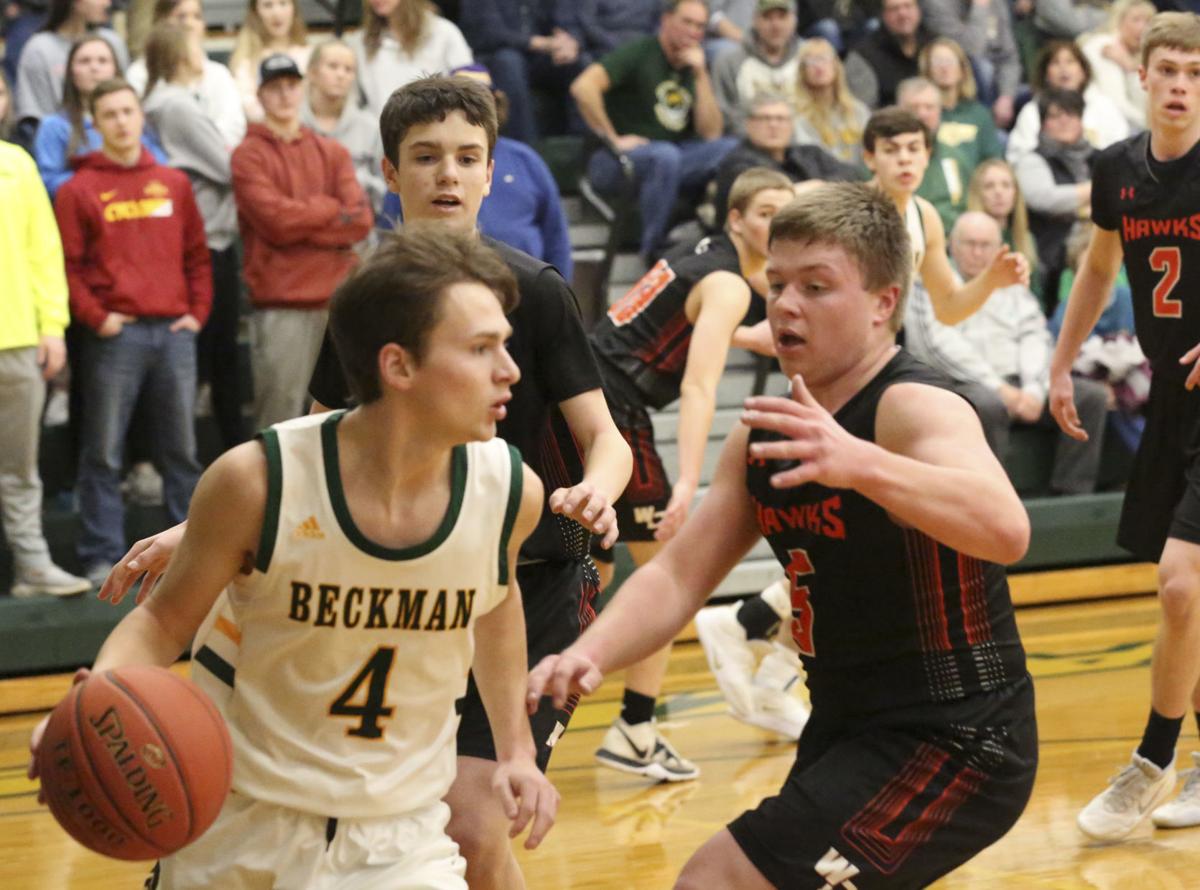 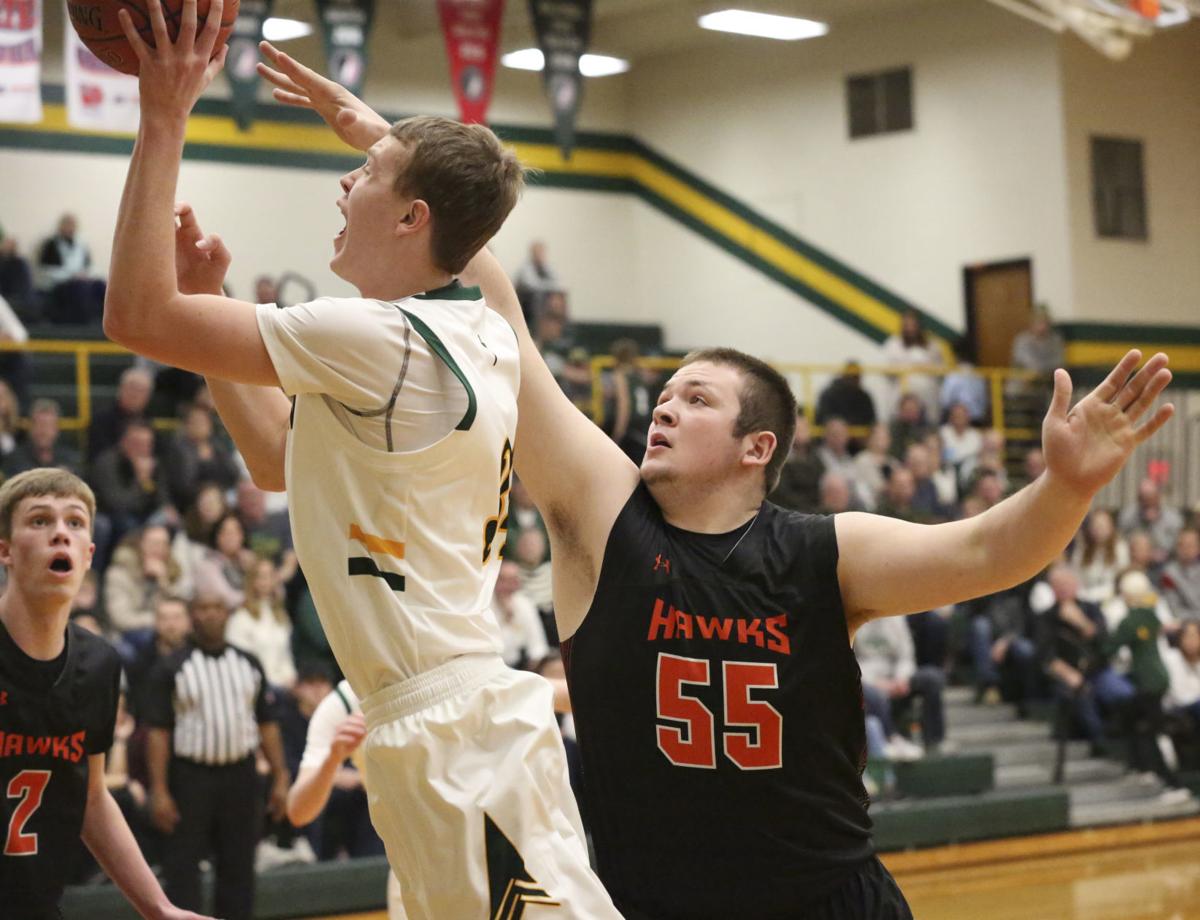 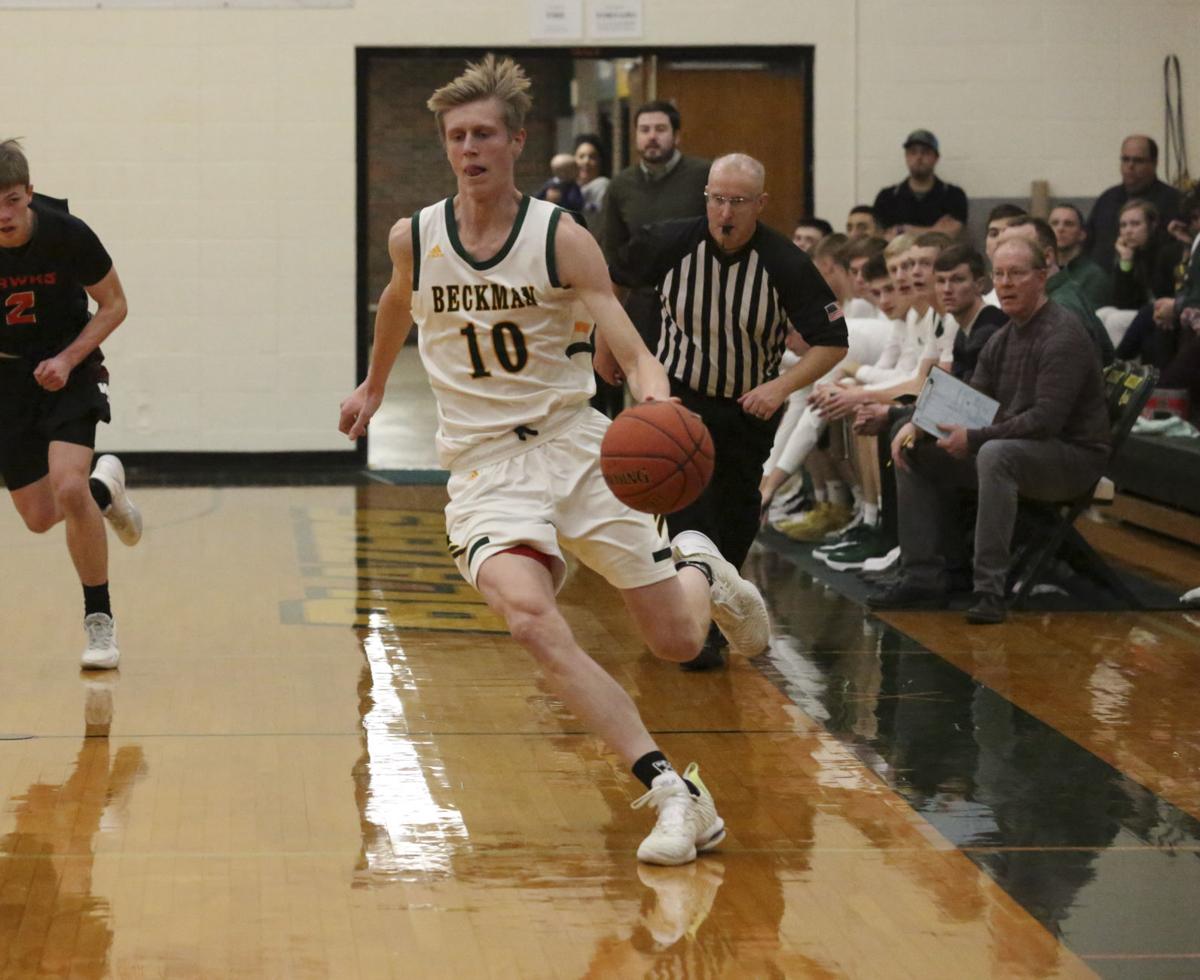 Michael Keegan brings the ball down the floor during their game with West Delaware. 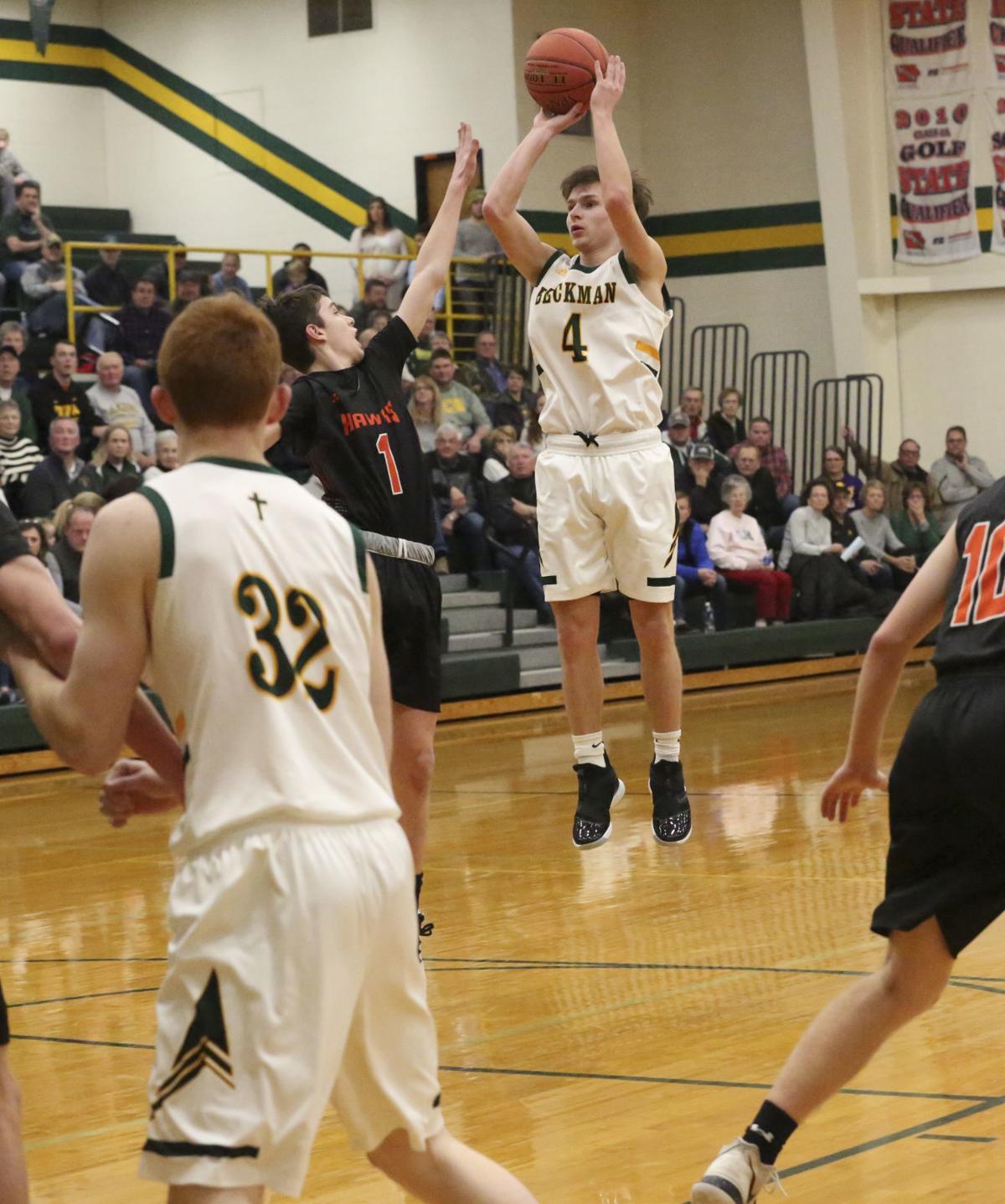 Tom Jaeger rises above the crowd, as well as defender Blake DeMoss, for his shot against the Hawks. 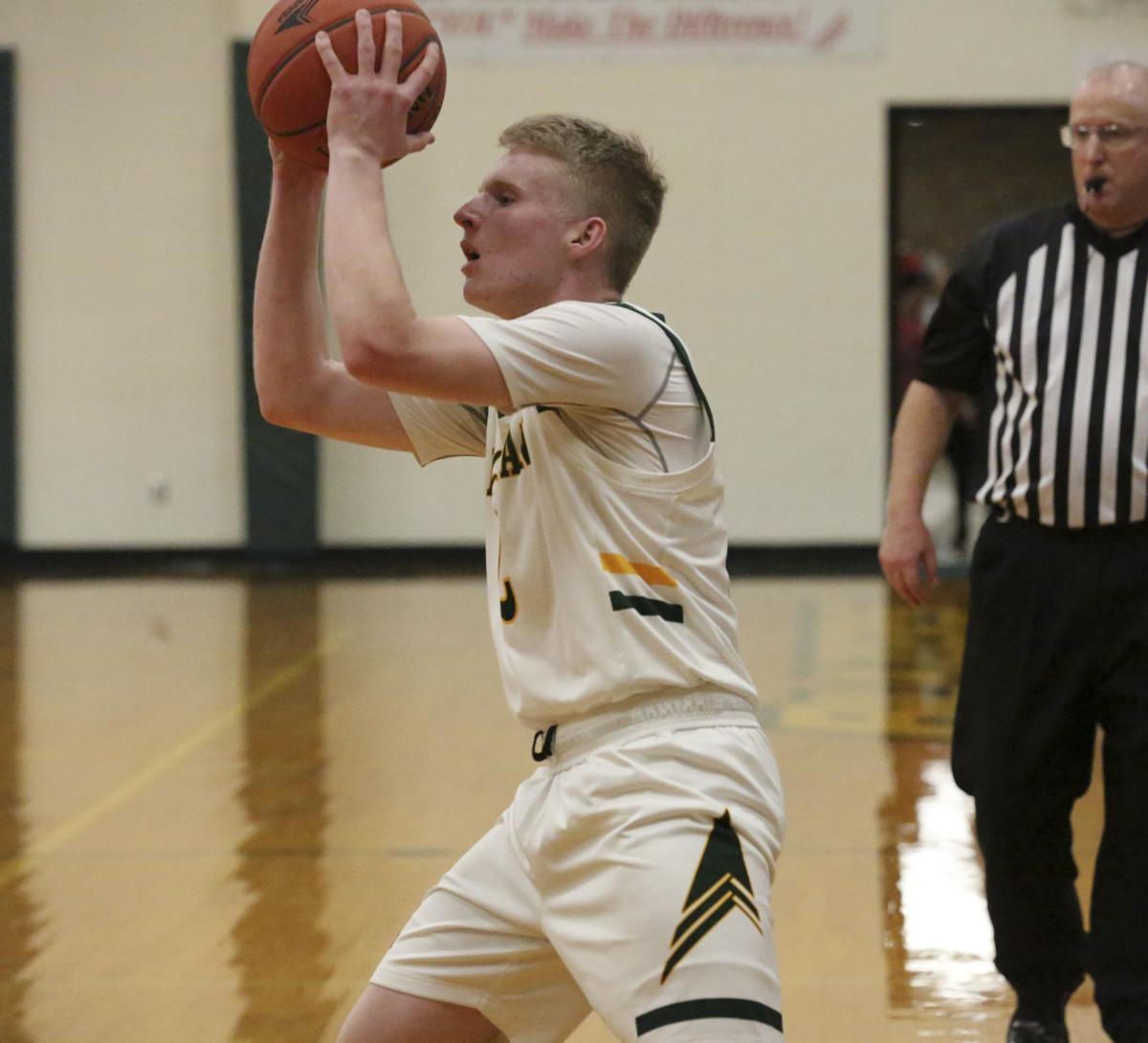 Luke Goedken looks to make the pass during their game with West Delaware. 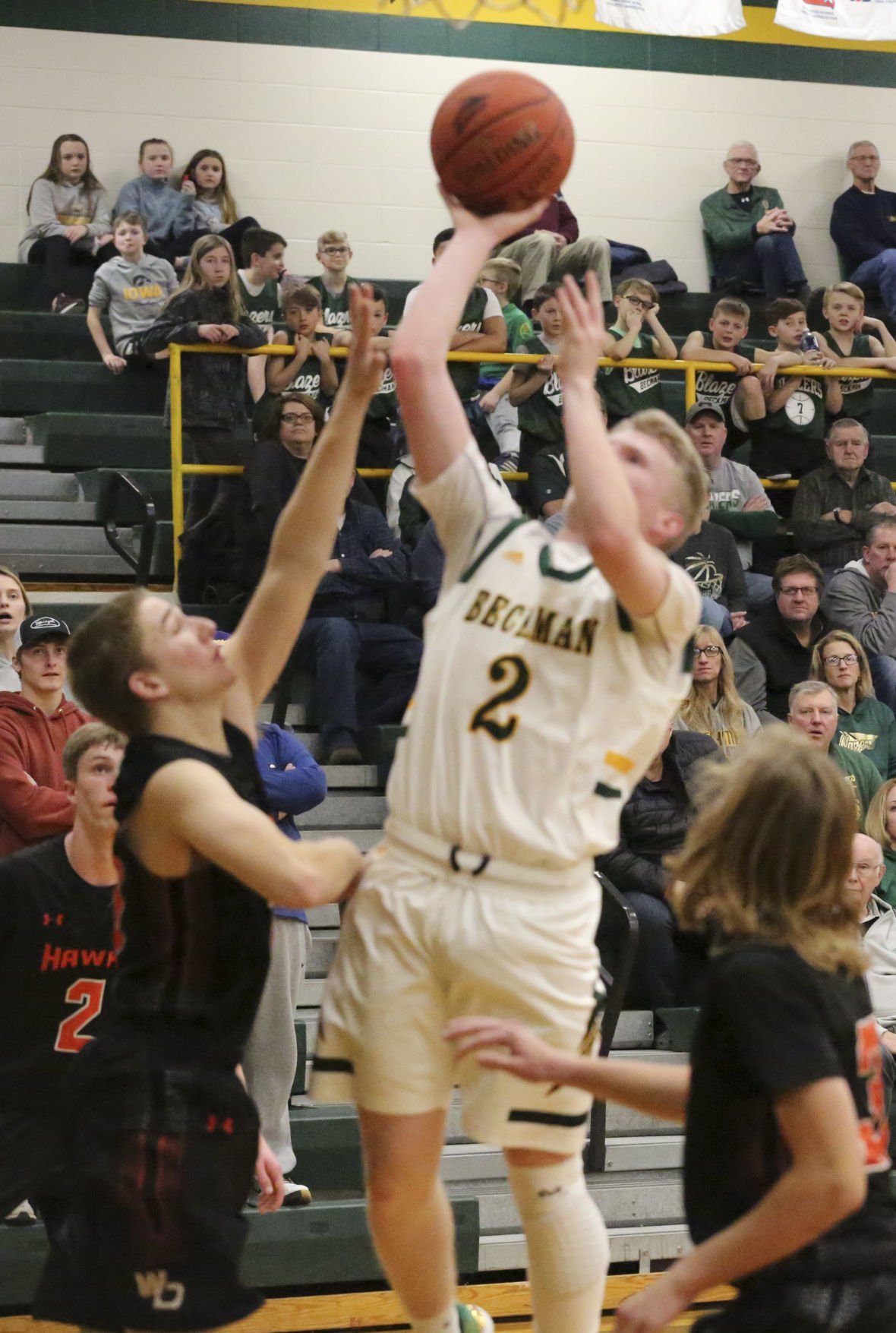 Luke Goedken goes up for his shot over West Delaware pressure. 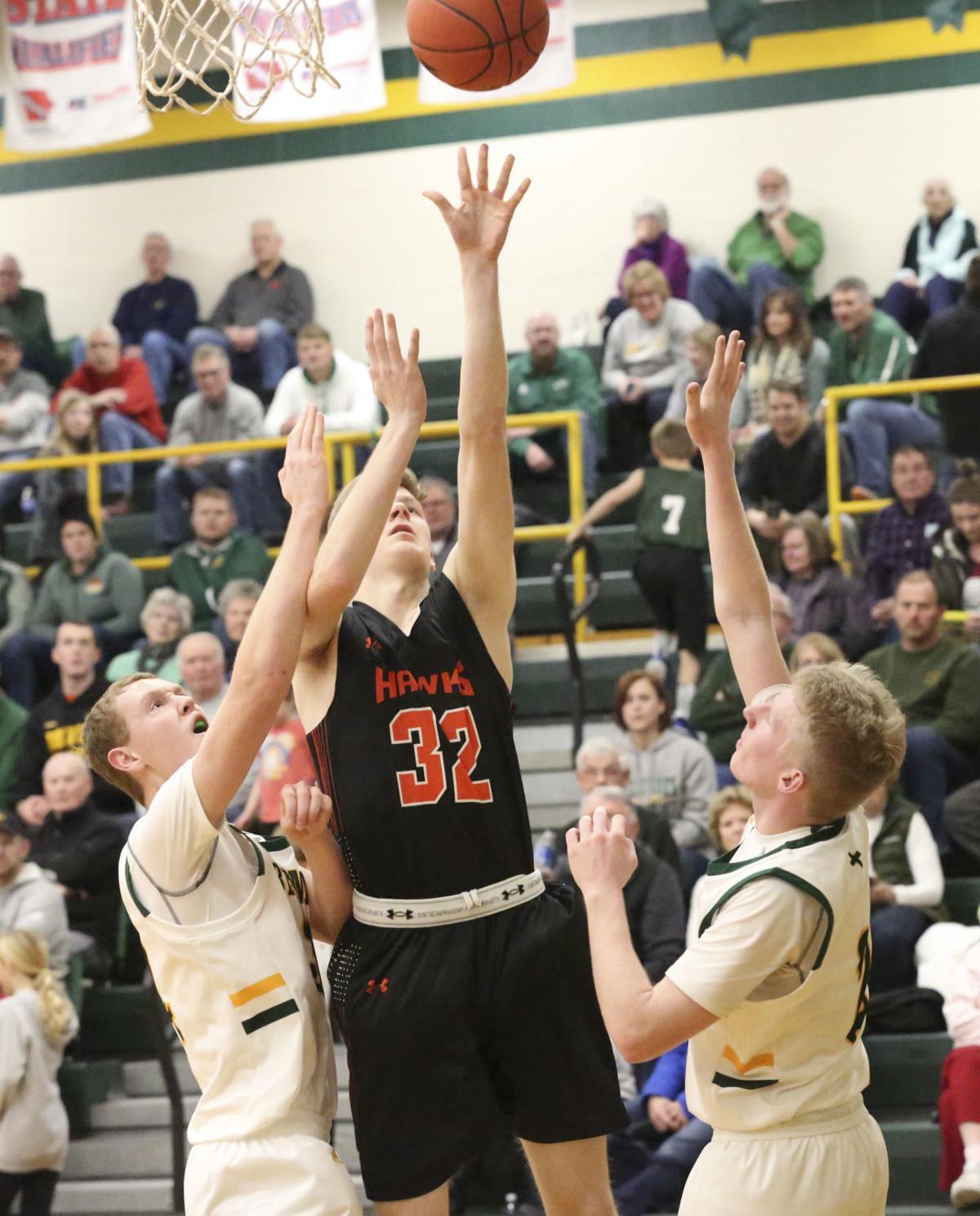 Mason White got the steal and follows the ball down the floor during their game with West Delaware jan. 21.

Michael Keegan brings the ball down the floor during their game with West Delaware.

Tom Jaeger rises above the crowd, as well as defender Blake DeMoss, for his shot against the Hawks.

Luke Goedken looks to make the pass during their game with West Delaware.

Luke Goedken goes up for his shot over West Delaware pressure.

It took a little extra effort in the first quarter after the three-minute mark, but the Beckman boys’ basketball team then went on a 14-2 run to lead 26-19 at the break on their way to an 82-64 pounding of the Solon Spartans at home, Jan. 20.

The game added another win to the Blazers’ 10-2 season and was a reschedule of the one to have been played at the canceled Wendy’s Classic at Loras, Jan. 11.

The seniors handled that big run. It started with a Michael Keegan trey and six-footer, a basket repeated by Tom Jaeger, before Keegan converted an inbounds play for two more. Luke Goedken added double bonus shots and ended with a lay-in off a Keegan steal-and-feed for the 26-19 mark.

After Solon cut the margin to 27-23, Keegan converted a stellar pass from soph Logan Goedken with a crowd-inspiring dunk to up it to 29-23. he dished to Luke Goedken again and Jack Gehling followed with both bonus shots to lead 33-25. Evan Schlarmann posted under the basket to get a bunny-and-one and Logan Goedken swished a long three to make it 39-27. The Spartans never got closer and the Blazers kept getting farther away.

The Blazers opened the fourth quarter with three straight threes, from Jaeger (two) and Keegan, to up it to 54-38. Solon’s Ben Cusick stopped the run with a lay-in-and-bonus, 56-41, but the Blazers had tasted the lead and were ready for dessert. Luke Goedken hit one in close, Mason White added free throws and Keegan contributed another six points, of his game-high 31, to close the quarter up 66-46.

Cusick scored the first basket of the fourth and got the advantage when Keegan was called for goal-tending seconds later, 66-50. But he answered with a four-footer and Gehling swished his own three to go up 71-50. From then on it was all free throws for the Blazers, who hit 11-of-12 to close the game.

“We knew coming off an extended break we had to seek improvement,” said coach Michael Molony. “Sitting almost a week without playing, we came out hot offensively and running out to a 26-point first quarter. By halftime it was 45 points, we didn’t let down, and it was one of our most complete performances on the offensive end. We really did a great job moving the ball around and finding numerous open shots.

“We found our defense in the third quarter, holding them to 10 points. Michael was impressive all around. I expect him to continue to do what it takes for our team to be in the best position to win.”

The very next night it was West Delaware’s turn to be defeated by the running Blazers at home, 58-35. The Blazers led 6-5 at the six-minute mark, then went on a seven-point run to end the frame up 13-5. The run included a free throw and three from White, a Keegan free throw and a quarter-ending lay-in from Luke Goedken. That momentum hung for the Blazers as they slowly built the lead to 11, 24-13 with four minutes to go. The Hawks came alive and scored six straight to get within five, 24-19, but it was time for another Blazer run.

Keegan began it with a free throw, Jake Hermsen hit a soft six-footer, and Keegan put back a Luke Goedken miss. Hermsen sank a little hook and Keegan hit a buzzer-beating three to lead 34-19 at halftime.

Neither team did much in the third, scoring eight and nine (Blazers). They led 47-33 with five minutes to go when both teams began to enter subs. Bryce Boekholder hit a long trey just after he entered to give the Blazers a 52-33 bulge and it was all over but for the buzzer-beating putback by frosh Padraig Gallagher.

“This was our second week running with back-to-back games, but this was our most consistent on both ends,” said Molony. “We did a fantastic job controlling the flow of the game and pestering their ball-handlers. I was impressed by our rebounding over a West Delaware team that is big and physical. I was proud of our toughness winning on the boards, 32-26. We also stepped up our defensive effort, holding them to 36% on the night.”

At Maquoketa Jan. 24, the Blazers eased to a 63-38 win, getting double numbers from three players. Keegan led with 21 that included two treys and six dunks. Jaeger hit 16 (two) and White added 10 (two). The Blazers drilled 8-of-24 from beyond the three-point arc.

Beckman began with a 15-2 first-quarter advantage and led 23-14 by half before pouring it on a little more in the second half. They outscored the Cardinals, 21-11, in the third and 19-13 in the fourth.

“We expected another physical performance and had to be ready to play,” said Molony. “Boy did we come out hard and play aggressive on the defensive end, one of our best four-quarter efforts on that end. We continued to move their zone that was focused on Michael and got great shots around the rim and from the arc. It seemed like the ball wouldn’t fall and we started to falter in our aggressiveness near the end of the first half.

“We continued to move the ball and all of a sudden a three fell and the floodgates opened. I was extremely proud of the week we had on both sides of the ball.”