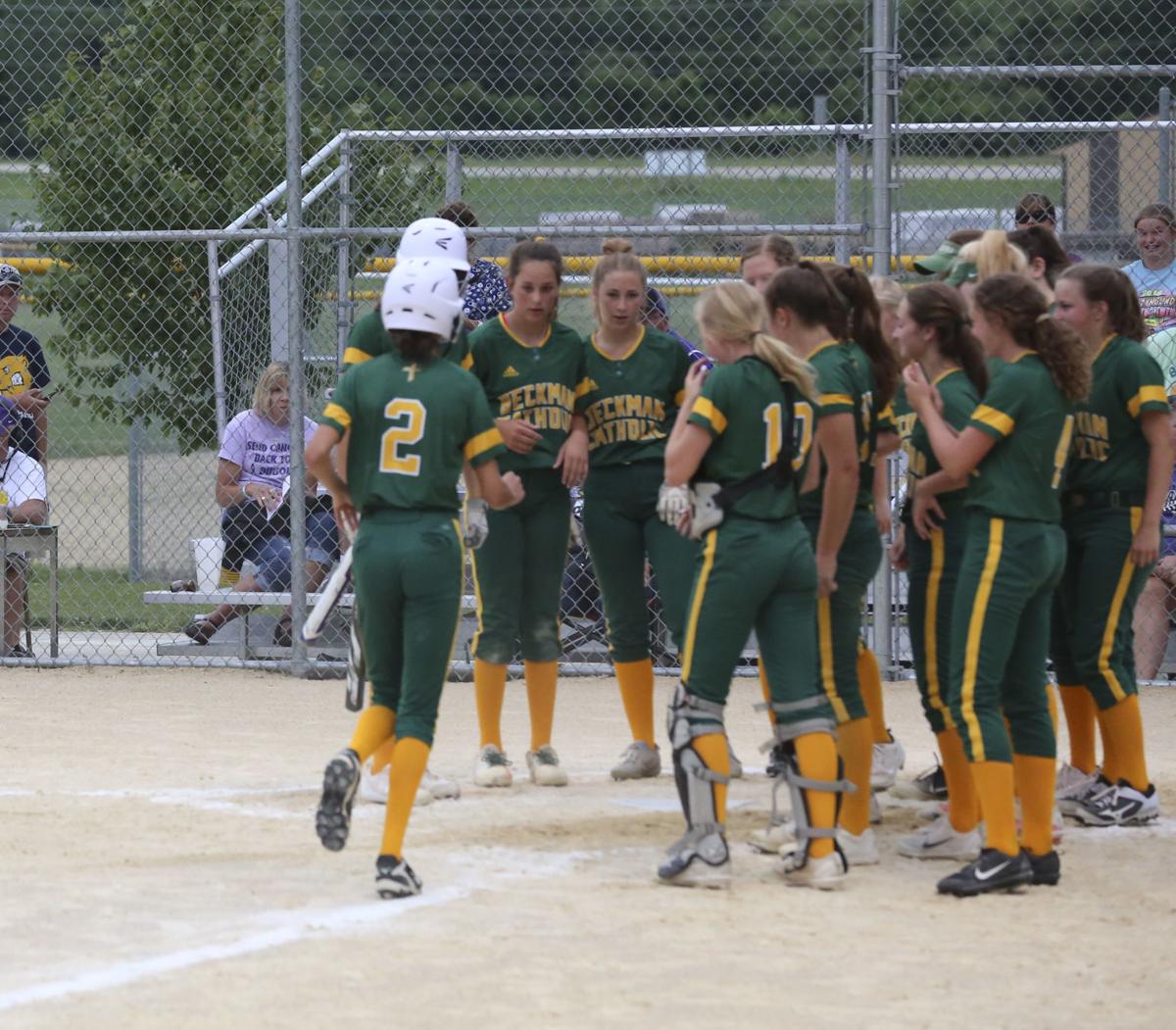 Members of the Blazer team surround home plate to welcome Kiersten Schmitt after she hit a home run in the game, her second of the season. 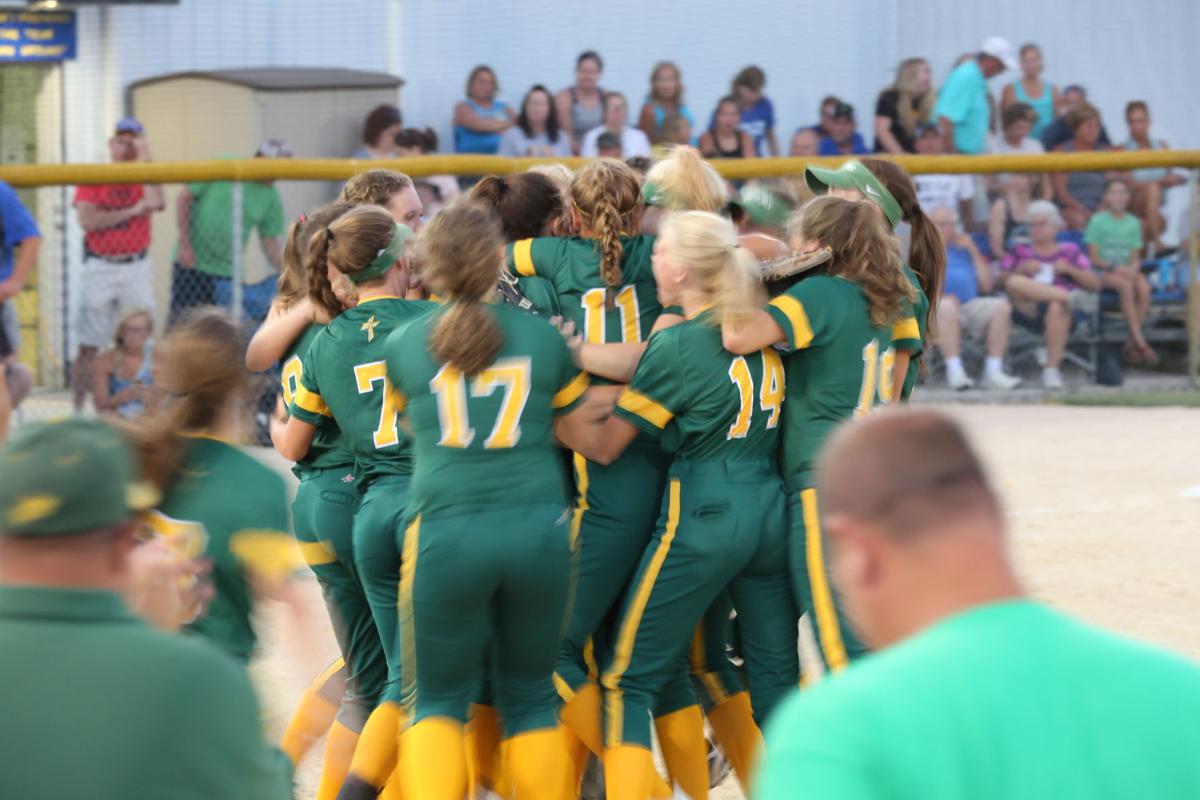 Blazers climb on Sydney Steffen in the circle after the final out that sent them to their first-ever state tournament game with a 4-2 win over Durant July 15.

Members of the Blazer team surround home plate to welcome Kiersten Schmitt after she hit a home run in the game, her second of the season.

Blazers climb on Sydney Steffen in the circle after the final out that sent them to their first-ever state tournament game with a 4-2 win over Durant July 15.

When a team reaches the state tournament and fulfills a season goal, sets a record with wins, what more is there to say about its success?

Such is the story written about the 2019 season for the Beckman softball team. The Blazers became the first-ever in the long history of the school to qualify for the state tournament and won one of two games they played there, ending the season with 31 wins against just 14 losses. Along the way, their members set some of their own records.

Iron-woman pitcher and senior Sydney Steffen completed her five-year career in the circle with the most innings thrown in recent recorded history, 1,042 2/3. Her inning numbers for this year (249 1/3) also led Class 2A and the WaMaC East stats, while her ERA of 2.22 was sixth in the conference. She was no slouch at the plate, recording the second-highest batting average of the team (.397), pacing them in home runs (six), RBIs (42), doubles (15) and walks earned (25), while ending second in triples (three) and hits (52), third in runs scored (25).

Her classmate, Heather Boeckenstedt, made a one-two punch that most teams feared. Boeckenstedt was named WaMaC Player of the Year and led the team and the conference in batting average (.514), good for ninth overall in Class 2A. She was tops on the team in hits in her lead-off position (71), runs scored (63), triples (seven), stolen bases (43-of-45), slugging percentage (.717) and on-base percentage (.573), was second in doubles (eight) and tied for second in home runs (two). She struck out a mere five times in all the games she played this season, in 138 at-bats.

“Our two seniors played tremendously all season and led us both on and off the field,” stated coach Ryan Meissner. “I could not have asked for two better leaders for this team. Each provided leadership in different ways but both were vital to our team success. We wish nothing but the best for them as they both move on to Coe College.

“Sydney finished her career with many great statistics and accomplishments but reaching 1,000 career innings was phenomenal. To reach that many innings you need to be effective on the pitching rubber for a long time. She will go down as one of the best pitchers in program history.

“Heather finished her career with many stats and accomplishments as well hitting over .500 for her senior season and becoming the WaMaC Player of the Year are just two of many great things. We will miss her determination and leadership.”

The rest of the field was filled with underclassmen this season, from several eighth-graders to a lone junior, and they handled the stress of varsity ball with grace. The junior, Emily Wulfekuhle, came on strong near the end of the season and in the post-season, as did sophomores Nell McDermott, Jadyn Welling and Keeley Schmitt, freshmen Lauren Osterhaus, Kamryn Klas and Kiersten Schmitt and eighth-grader Shea Steffen, who was forced into a starting varsity role at the state tournament.

A bevy of subs saw valuable action in games as well as building a winning Level 3 record this season, giving Meissner hope for a bright future. “We have a lot of talented players coming up through the program, just waiting for their time. We had a few players play different positions this year. They chose to do so for the betterment of the team and performed their duties extremely well. Those who played in their first varsity games this year did so admirably. Those experiences will help them in the future.

“There will be tremendous competition for spots next season. We need to fill two key spots but I am confident we will have quite a few choices due to the talent in the lower grades.

“Back in February when we put the off-season open gym schedule together, we met with all the players and laid out the important dates and information. We also set our goals. I mentioned to them that our primary goal was to play in Fort Dodge at the end of the season. With a lot of hard work, effort and sacrifice we met that goal. For this team to be the first Beckman Catholic softball team to make the state tournament is nothing short of awesome. They have a lot to be proud of.

“I want to thank everyone for their support this season and making this ride to Fort Dodge memorable. I did say this after our sub-state win but I want to say it again. The success of this team and the road to the state tournament was started many years ago. To all the young women who ever played Beckman softball, thank you for ‘Blazing the Trail’ for us,” concluded Meissner.