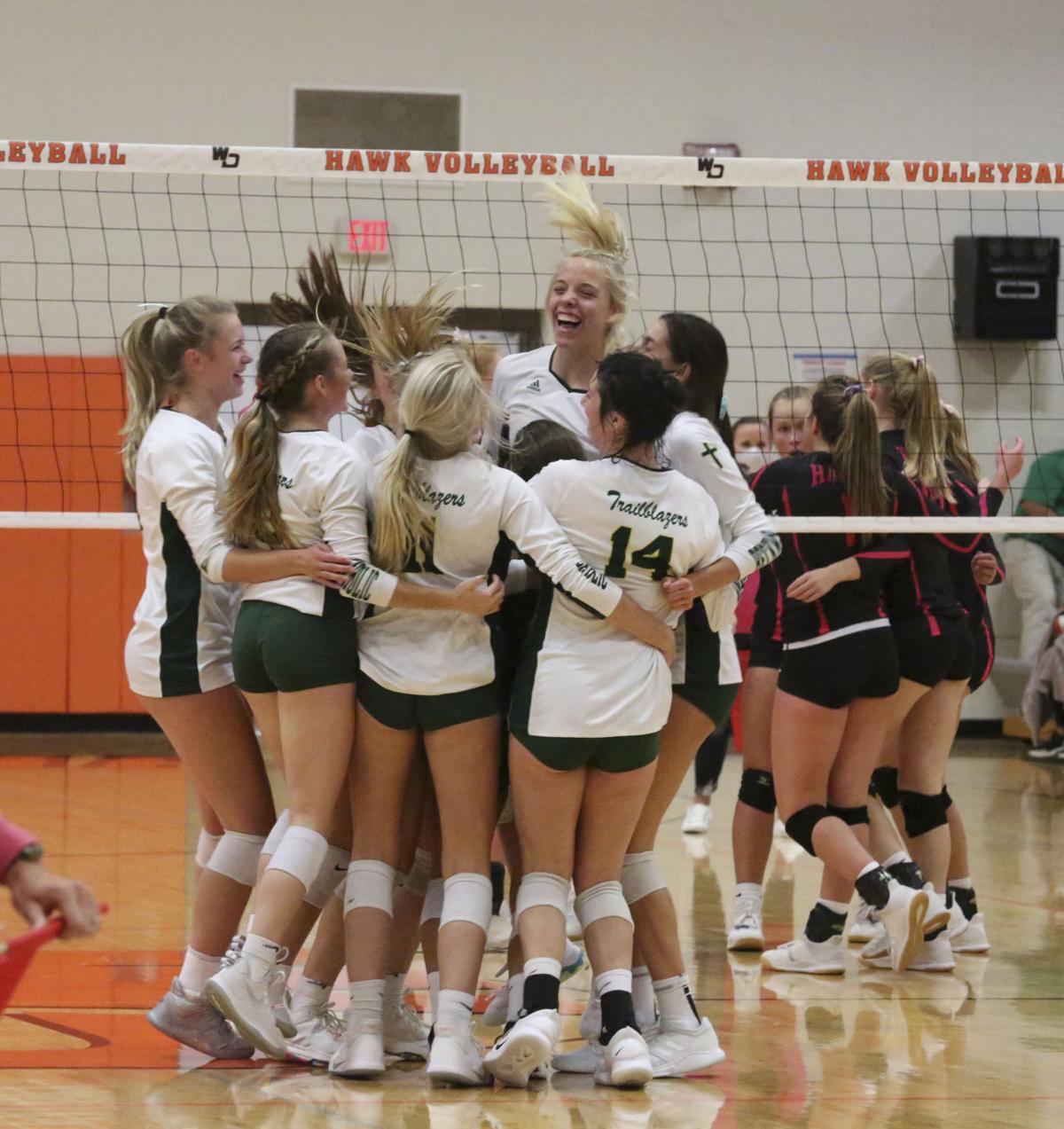 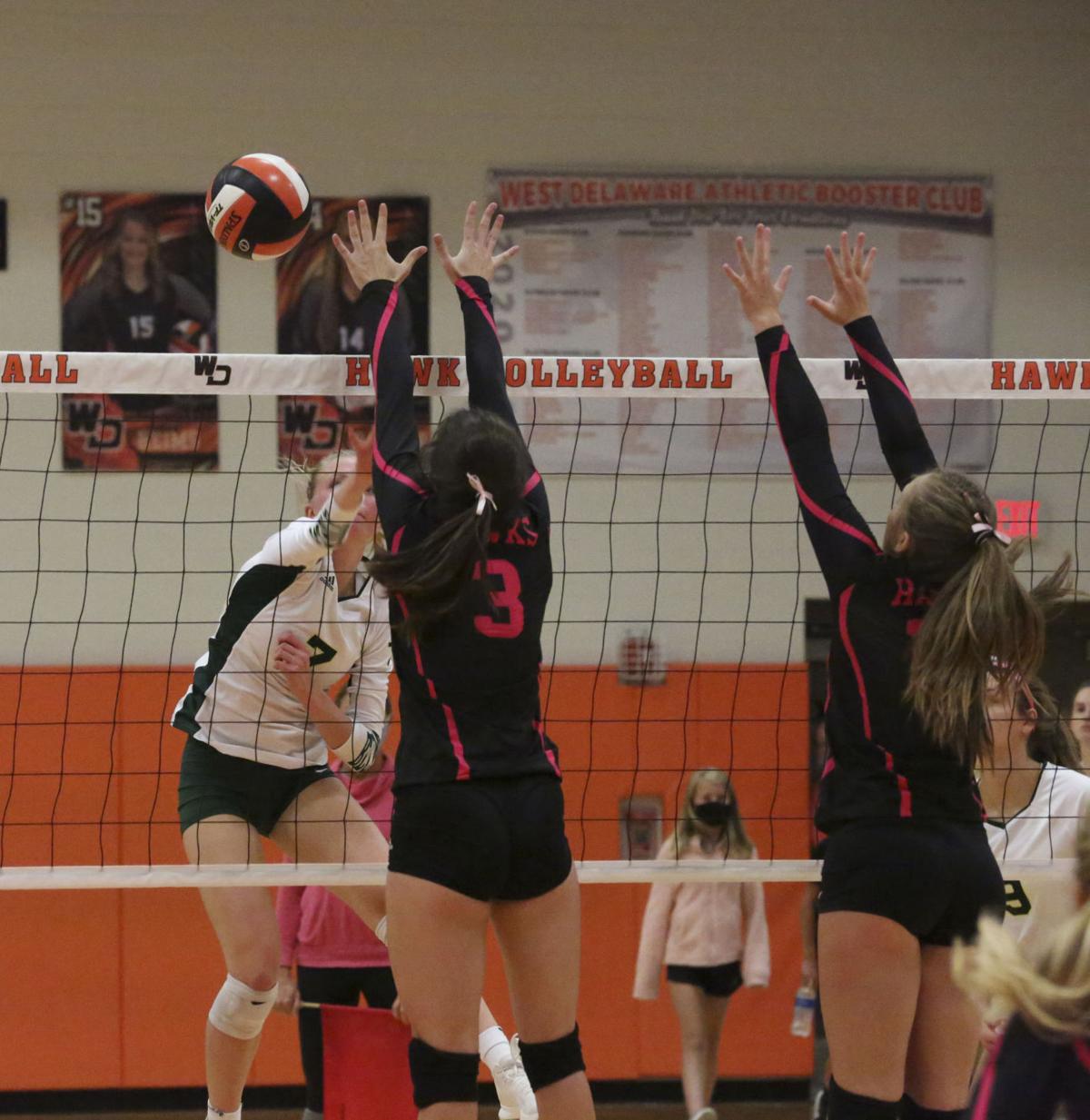 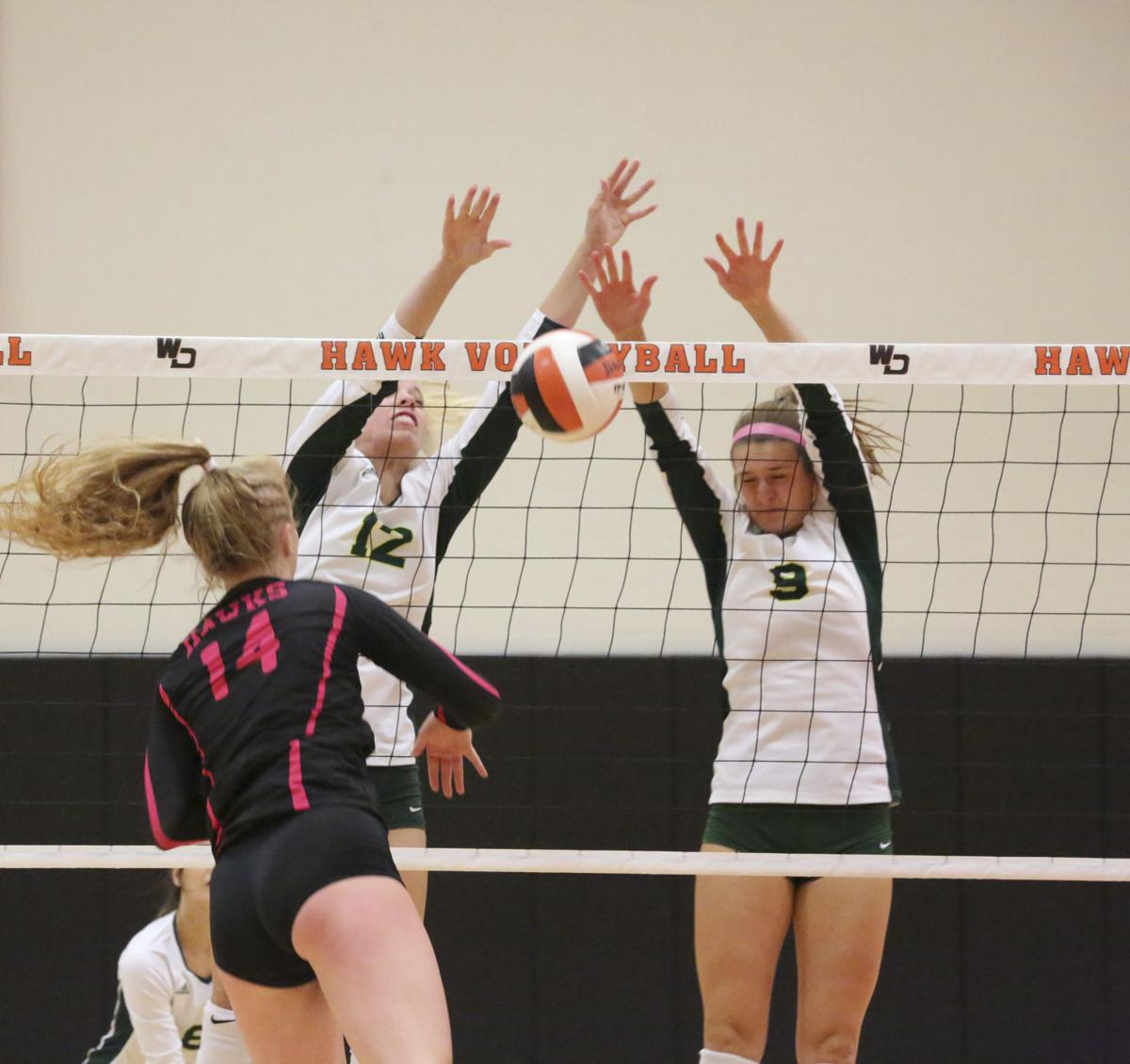 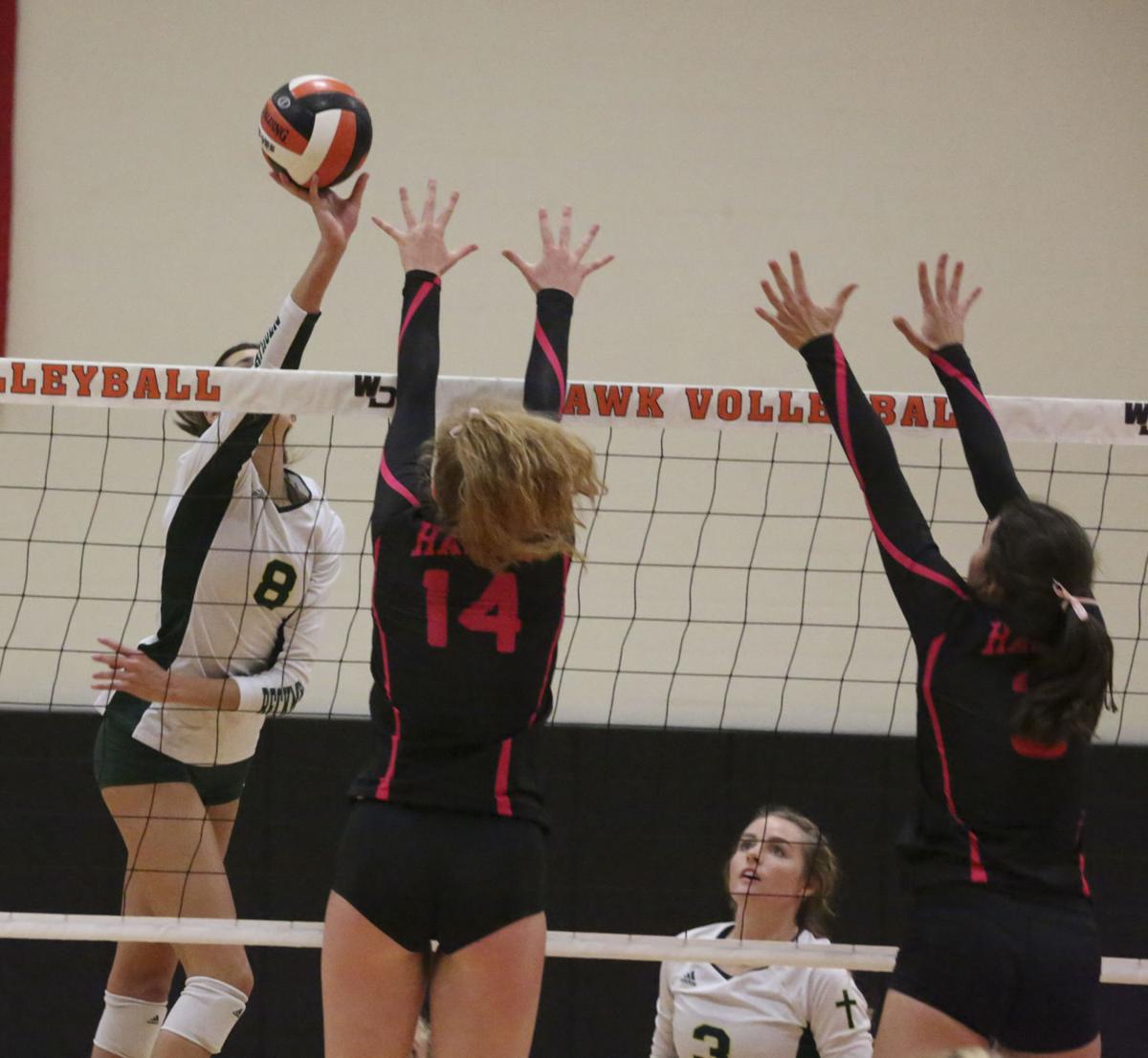 Kiersten Schmitt powers one of her 22 kills over the hands of Ava Hauser (14) and Jaci Bries. 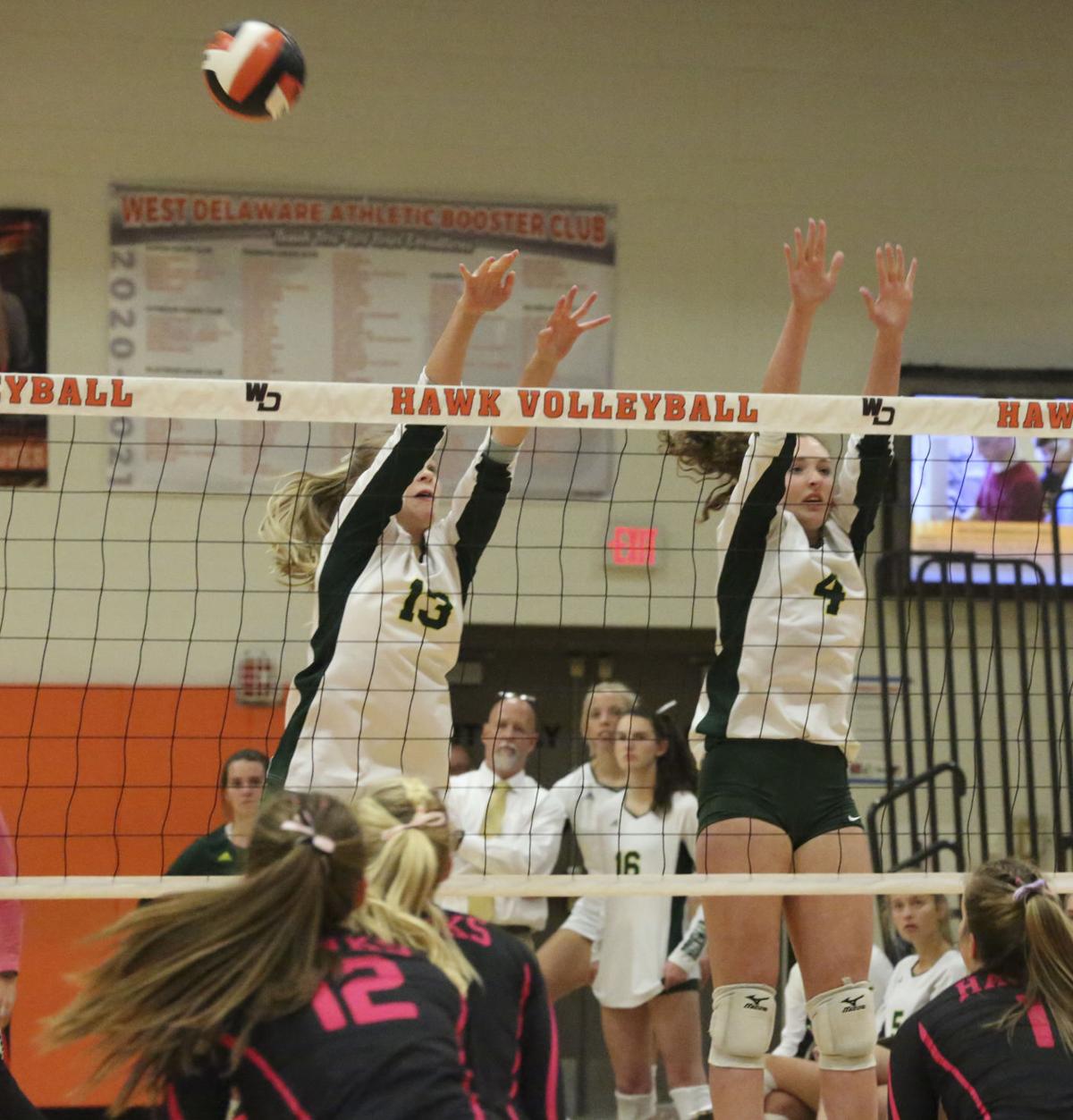 Kylee Rueber and Jami Kruse (4) go up for the block. 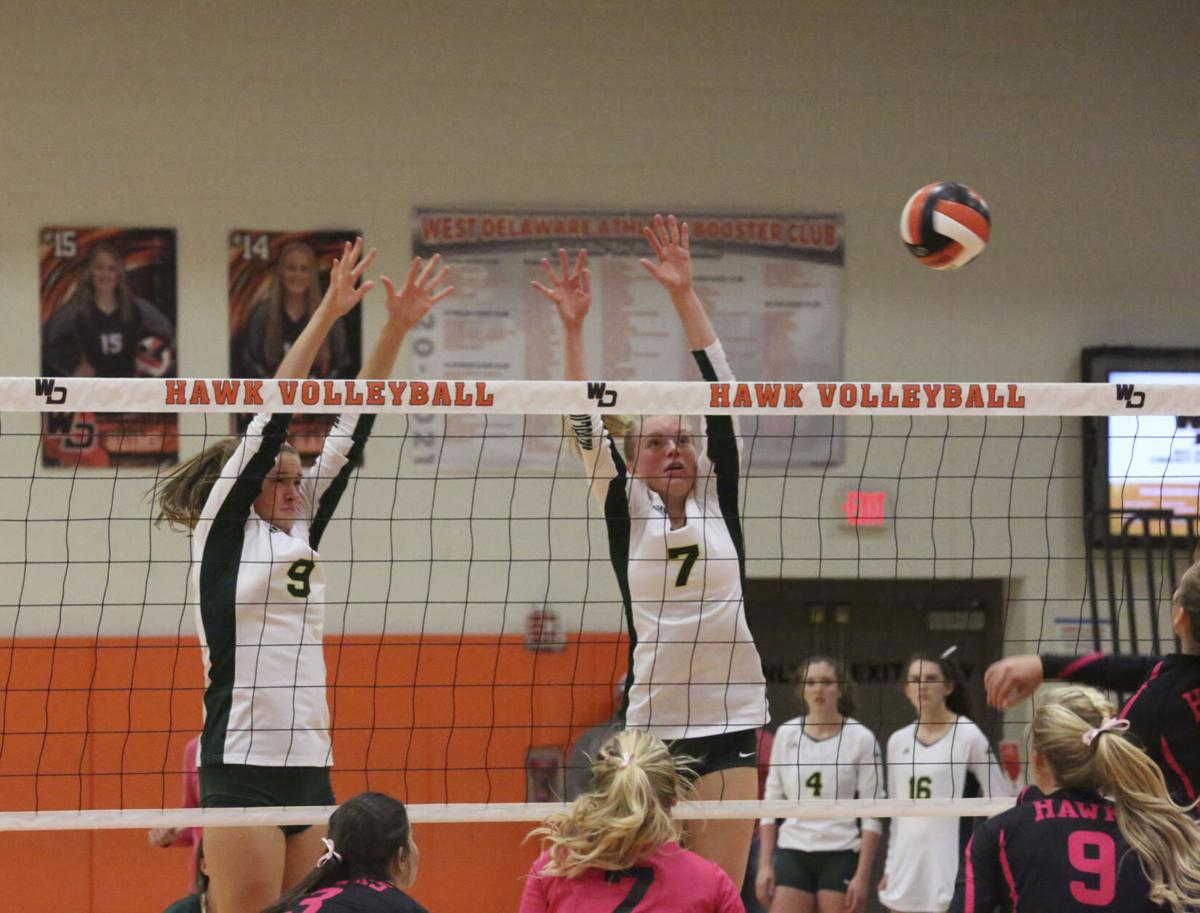 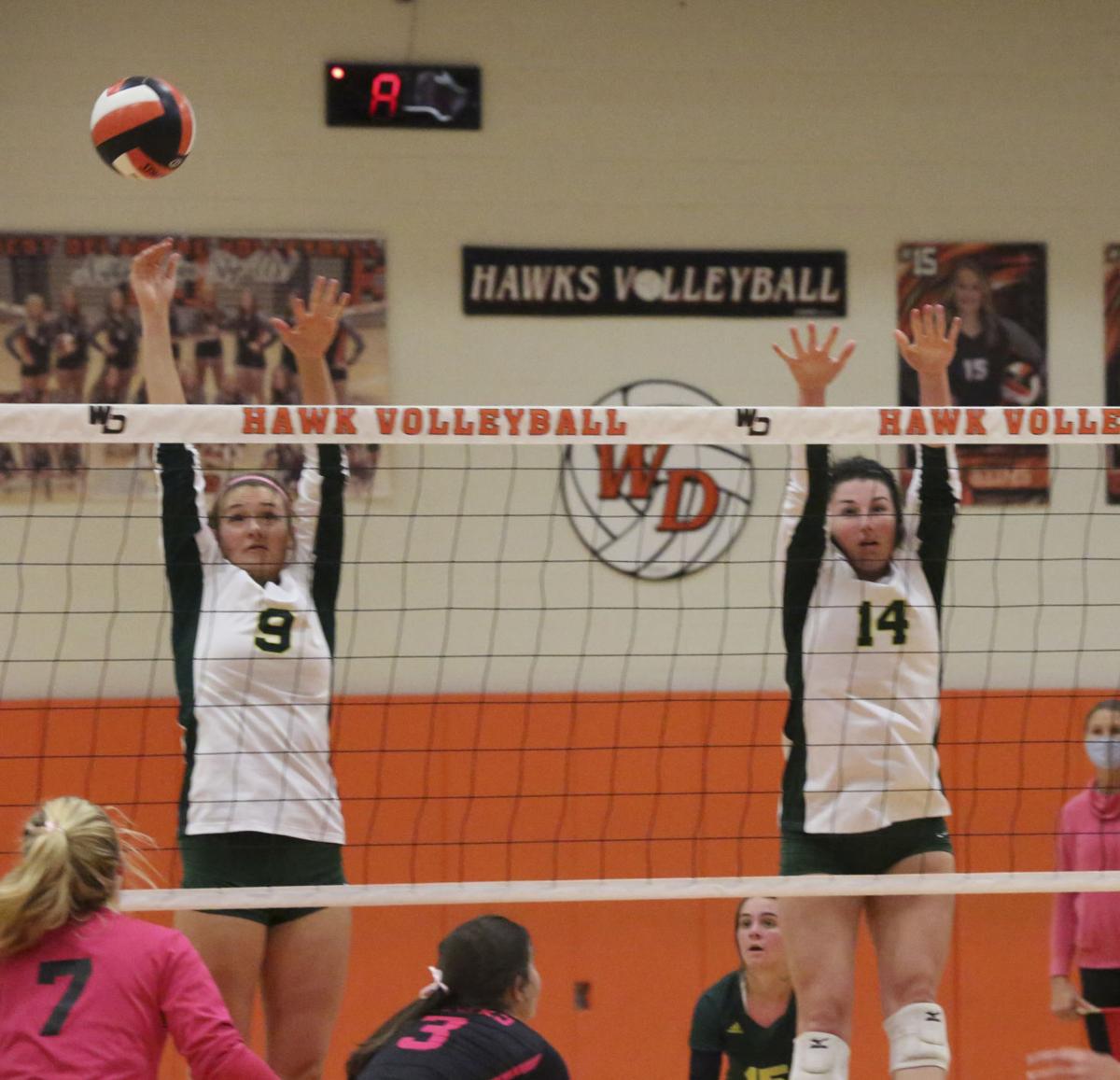 Lauren Osterhaus (9) and Jadyn Welling go up for the block. 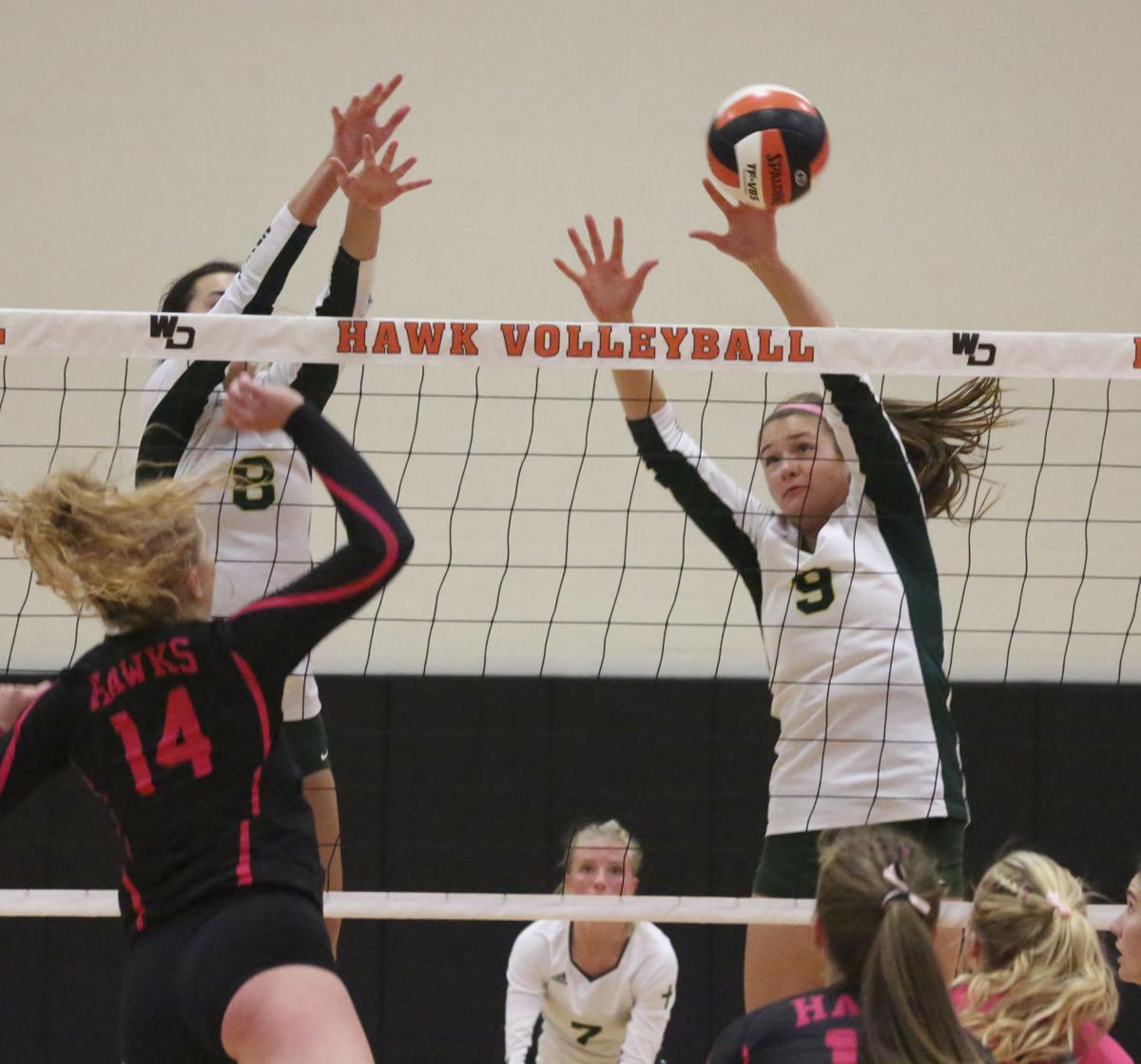 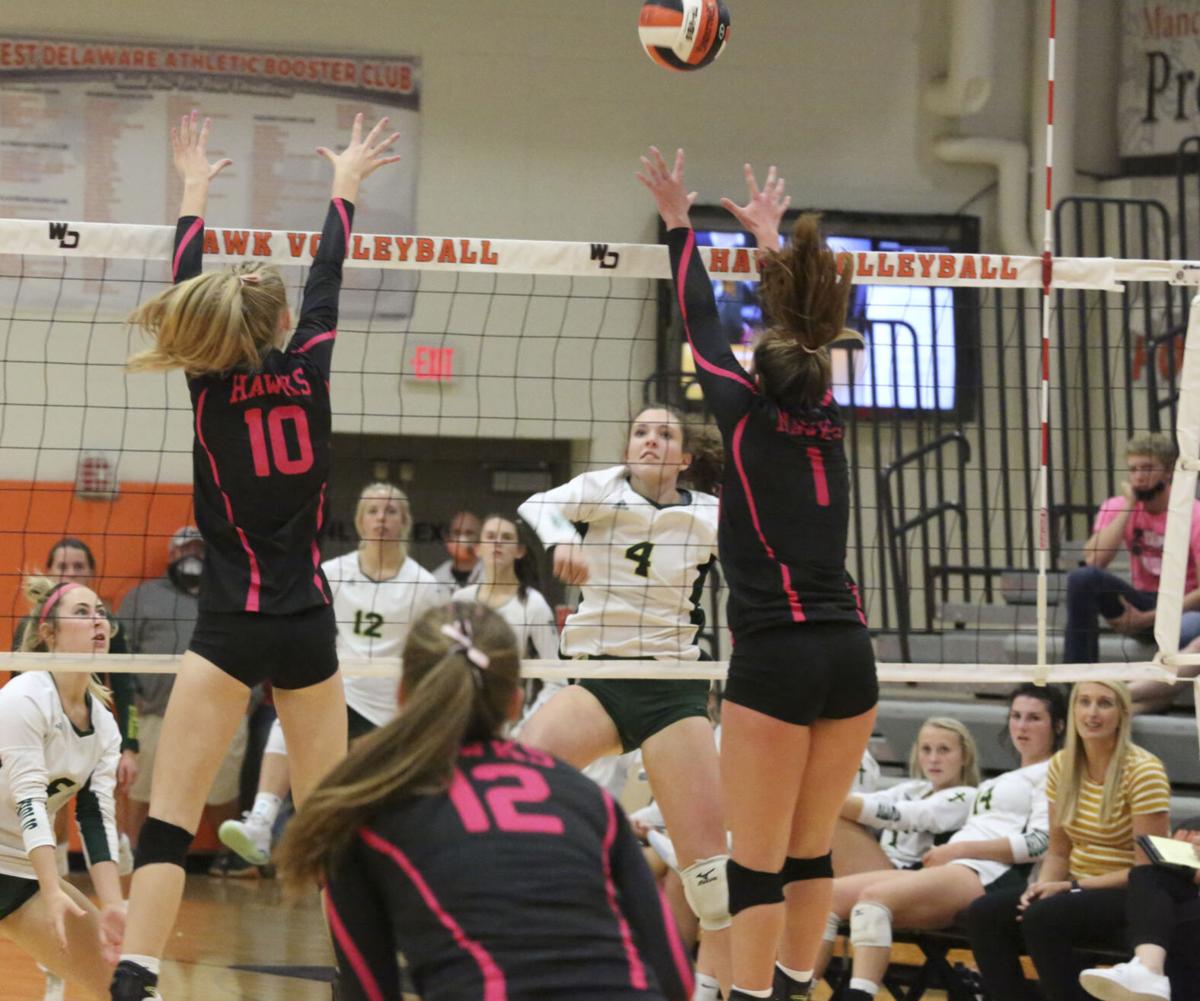 Jami Kruse slides a kill through the double block from Allie Demmer (10) and Carlee Smith. 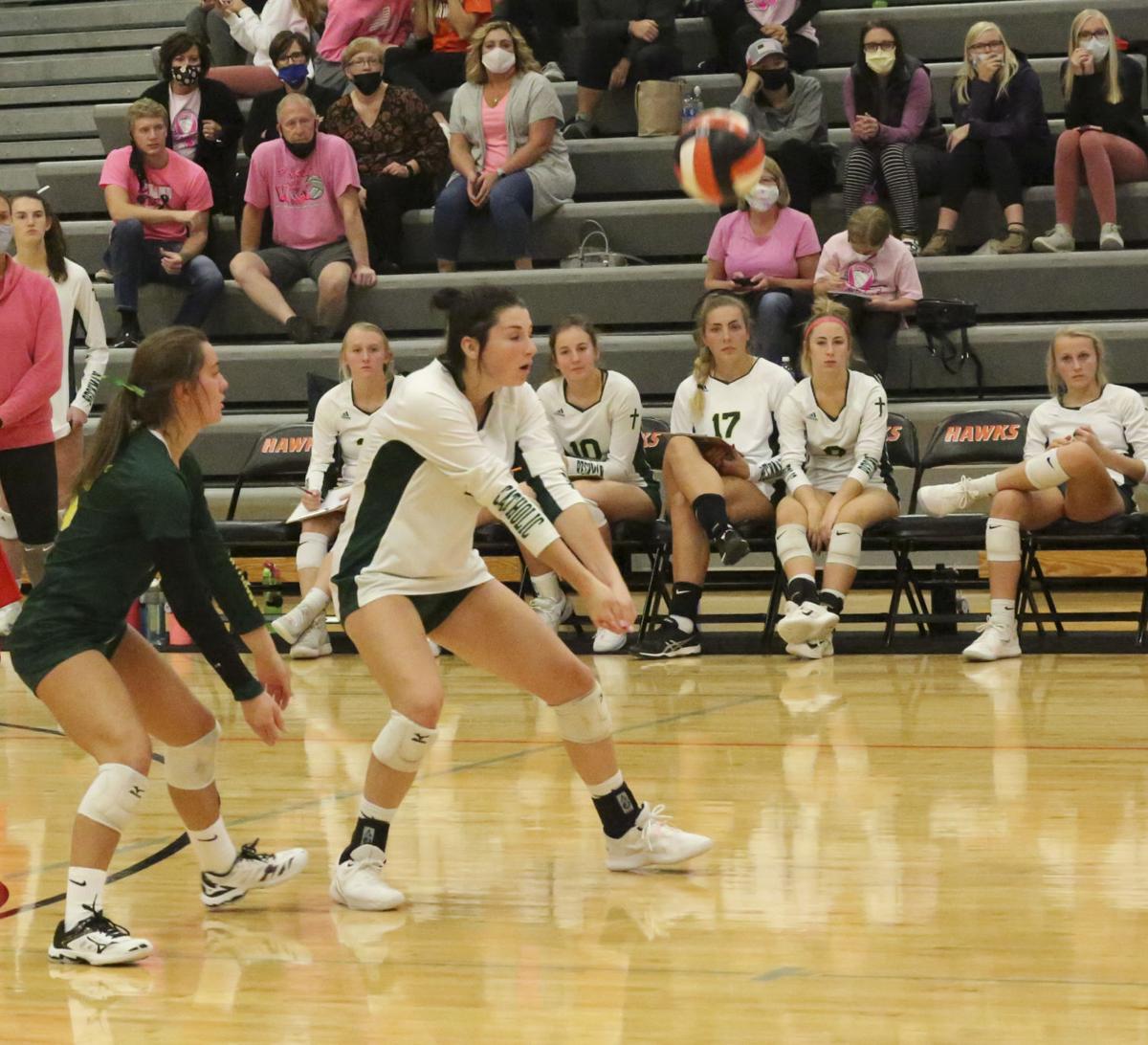 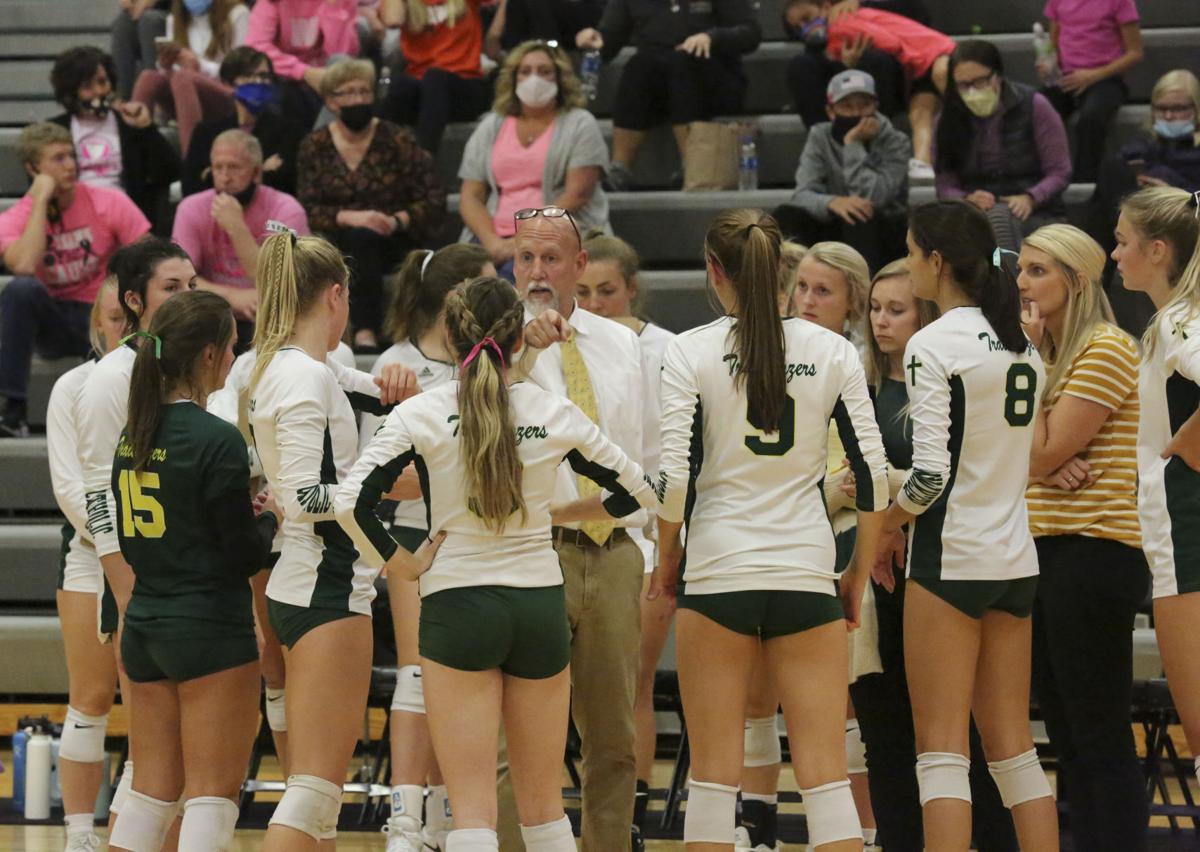 Todd Troutman makes a point to his team during a timeout. 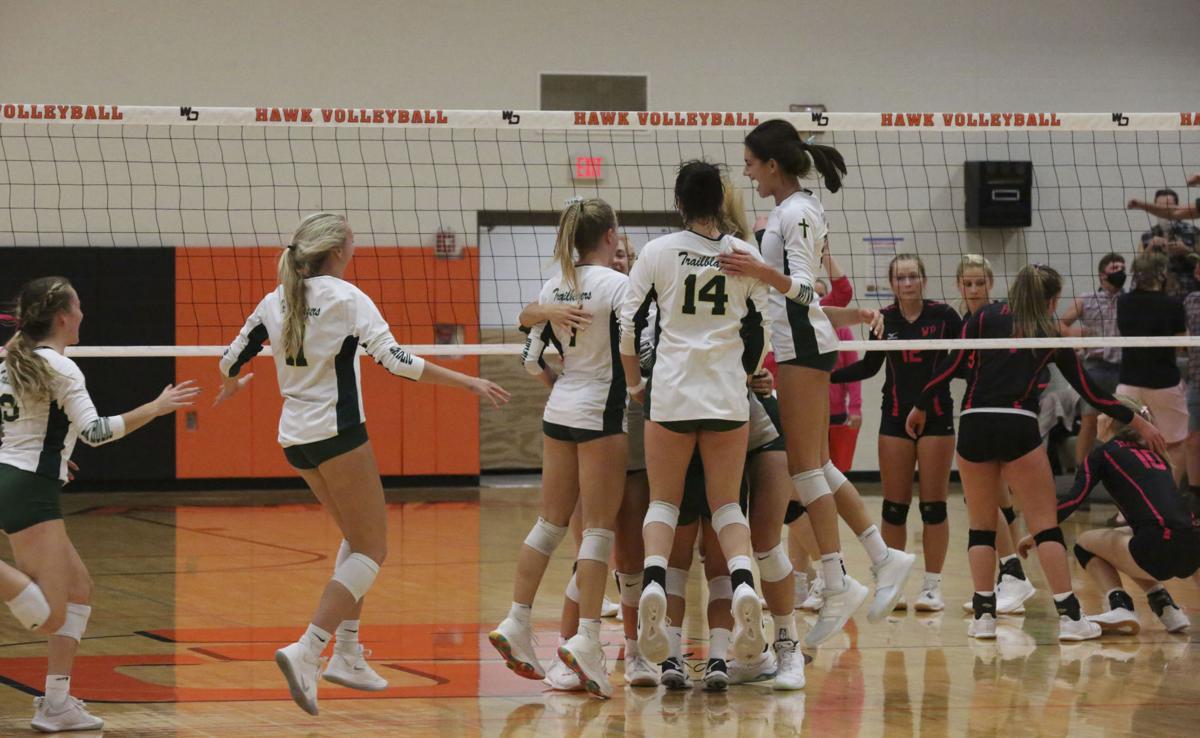 Blazers celebrate the five-game win that earned them a 5-0 record and the top of the WaMaC conference, their first title since 2005. 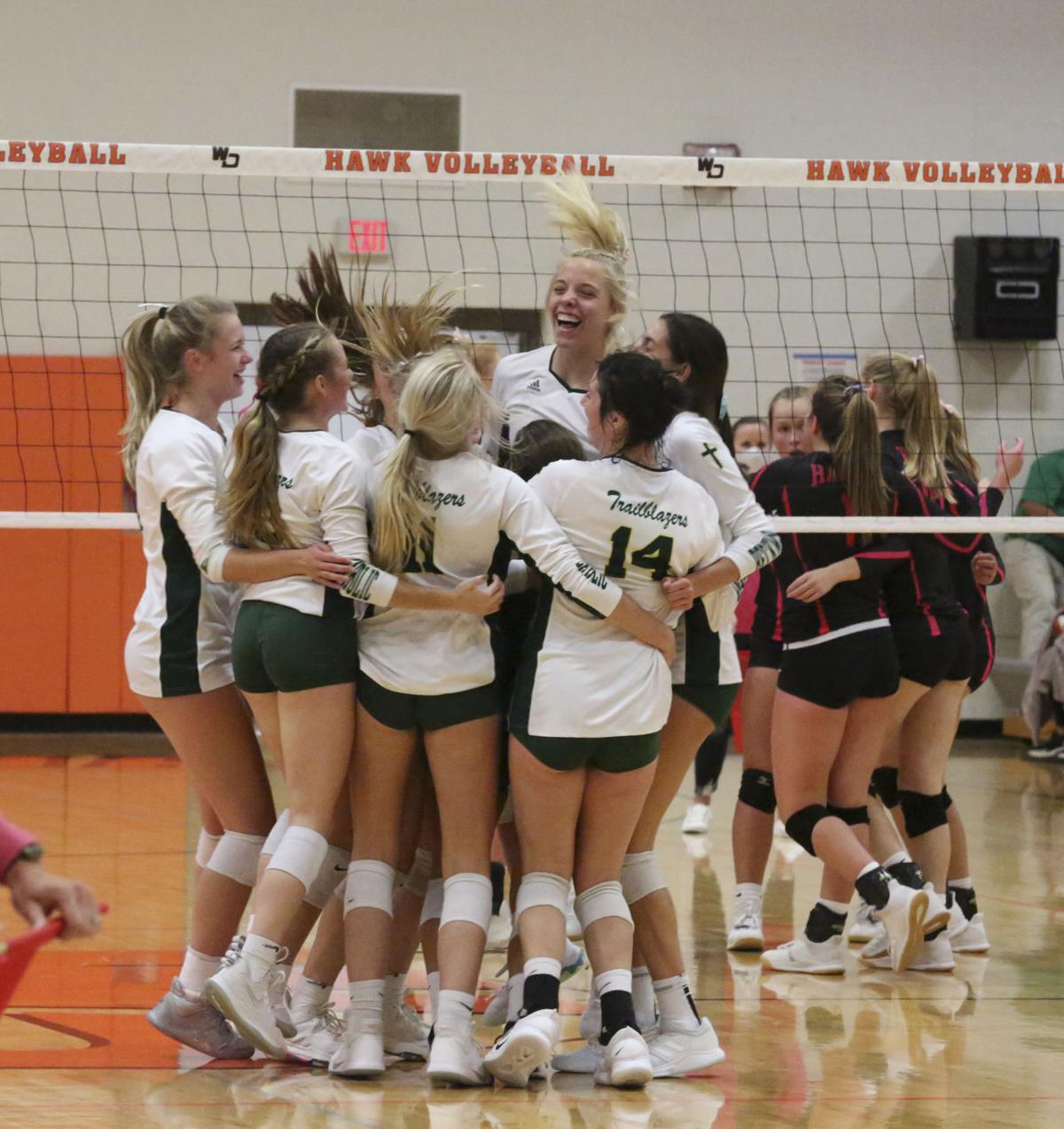 Kiersten Schmitt powers one of her 22 kills over the hands of Ava Hauser (14) and Jaci Bries.

Kylee Rueber and Jami Kruse (4) go up for the block.

Lauren Osterhaus (9) and Jadyn Welling go up for the block.

Jami Kruse slides a kill through the double block from Allie Demmer (10) and Carlee Smith.

Todd Troutman makes a point to his team during a timeout.

Blazers celebrate the five-game win that earned them a 5-0 record and the top of the WaMaC conference, their first title since 2005.

When Olivia Hogan’s serve got batted around and then fell harmlessly to the floor, it capped a five-game marathon comeback win for the Beckman volleyball team over West Delaware in their home gym, Oct. 6. The Hawks won the first two games, 25-20, 25-22, but Beckman came back and swept the next three for the win, 25-16, 26-24, 19-17.

Hogan took serve after Kylee Rueber broke a 17-17 tie with a thundering kill that put the Blazers a point away from winning the match at 18-17. Hogan delivered and was obviously overcome by the feat. It was her lone ace of the night on 15-of-16 serving.

The win also cemented the Blazers’ WaMaC East championship, their first since 2005, with a stellar 5-0 record.

Coach Todd Troutman said, “We went into the match knowing we had a chance to win an outright WaMaC East title, but more importantly, to face a very good team that would challenge us to play tremendous defense. I thought the match was exactly what we needed at this point in our season.”

The night began unusually for Blazer fans. They watched as their team dropped the first two games to a fired-up Hawks crew on Senior night and Pink Night for Cancer. In the first, a Hawk run gave them a 9-5 lead until the Blazers knotted the game at 11-11 on Kiersten Schmitt’s kill, the second of her 22 on the night. From then on it was point-for-point with neither team getting any kind of run. Knotted again at 20-20, Kam Klas’ net serve began a run of the last five points for the Hawks that included a tip kill from Carlee Smith, a block of a Schmitt attempt, one that went too far for her as well and a game-ending ace from Kayla Felton.

Game two began another struggle for points until the Hawks found a way to gain a 14-7 lead, helped by called lifts on Leah Wessels. A Lauren Osterhaus kill finally stopped the run and a Hawk error put the margin at 14-9. They added two kills to up that to 16-9 before sending one too far and turning serve to Klas. She proceeded to deliver the next five points, with the help of blocks at the net by Schmitt and Osterhaus. The Blazers eventually found a little lead, 21-20, but another net serve, this time by Hogan, sent the Hawks on a four-point run, 24-21. When Alivia Schulte served long, the Blazers got one back, 25-22, but Ava Hauser delivered the game-ending kill, 25-22.

In game three, the Blazers took early control and never ceded it back, taking advantage of what Hawk coach Brad Mather said was “17 errors. They didn’t even have to play well.” The Blazers broke to an early 7-1 lead and never let the Hawks get much closer than that, winning 25-16

Troutman added, “We kind of dug ourselves a hole losing the first two games, and, while they were close, we knew we had the ability to clean up our passing and run our offense more efficiently. In game three, West Delaware started making errors and, to our credit, we capitalized very well. At that point, we knew we were back in the match.”

Then came the do-or-die game four, another Hawk early lead, 6-1. Battling back to 6-5, the Blazers gave up another set of points, down 12-6. When Hauser, at the service line, sent one into the net after hitting an ace, the score was 12-7. Jadyn Welling used an ace and two Hawks miscues to pull them within one, 13-12, but the Hawks rallied again, going up 17-12, before Klas tipped a kill down and Hogan took serve, giving her team three much-needed points, 17-15.

The teams traded points until the Blazers went on a five-point run, begun by a Schmitt kill and fueled by Nell McDermott’s serves, for a 22-20 advantage. Back came the Hawks, using back-to-back aces from Hauser for a 23-22 lead. But she served long again, knotting the game at 23. On Schmitt’s serve, Jami Kruse hit the wrong side of the sideline to trail 24-23. After that, it was the Blazers’ turn, with a Hawk block that went out, a miss from Hauser and Schulte and game: Blazers, 26-24.

“Going into game four we stressed maintaining our focus but West Delaware once again put tremendous pressure on us with that five-or-six point lead. I thought we did a great job of staying aggressive and putting the pressure back on them by extending rallies with great defense and putting ourselves back into a position to even the match. Taking game four the way we did, fighting off match points, gave us a ton of confidence going into the deciding game,” added Troutman.

Schmitt would have none of that, pounding two kills around a Rueber kill to go up 15-14. A Hawk block made it 15-15, a Rueber kill 16-15 before a missed return on the green-and-gold tied it again, 16-16. Jenna Lansing found the floor to make it 17-16 but a Hawk tip knotted it at 17, setting up Rueber’s kill and Hogan’s match-ending ace, igniting a Blazers’ celebration.

“Game five was exactly what it should have been. Two excellent teams battling back and forth for every point. Again it was our defense and aggressive play that kept us in the game going point for point. West Delaware once again had several match points when Nell came in to serve, down 14-11. She served aggressively and didn’t allow them to get a great swing and we were able to tie it at 14. From then on every point was hugely contested and Kylee came up with a couple of huge plays at the net and Oliva sealed it with an ace.”

The win also added to the string of over 600 wins for Troutman, a milestone he passed at the Waverly tournament over the weekend.

Troutman concluded, “This group of kids has shown toughness throughout the season and it was that toughness that allowed them to go through a very tough WaMaC East schedule undefeated. We will have to continue to bring that toughness in every match from here on out to reach some of the other goals we have set for ourselves.”