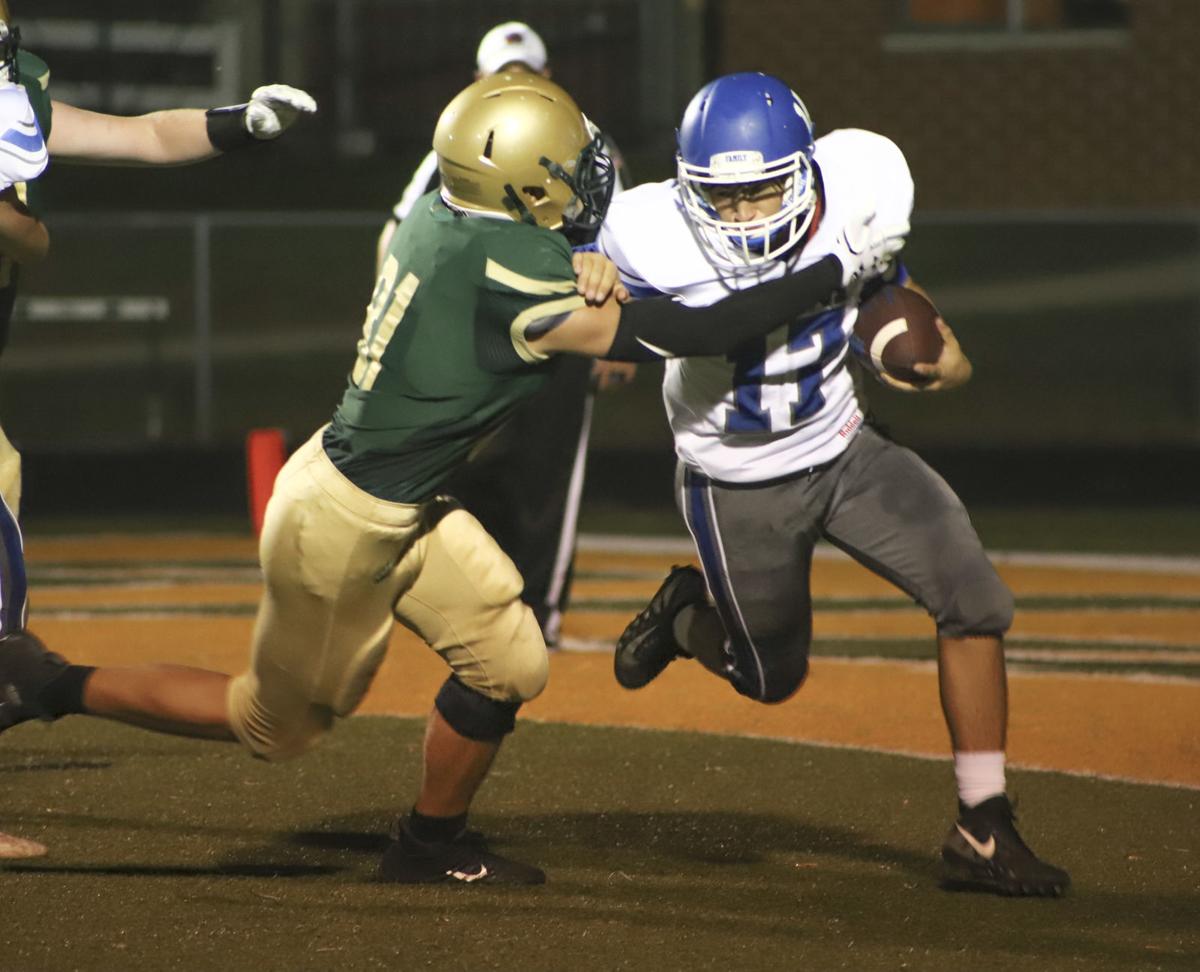 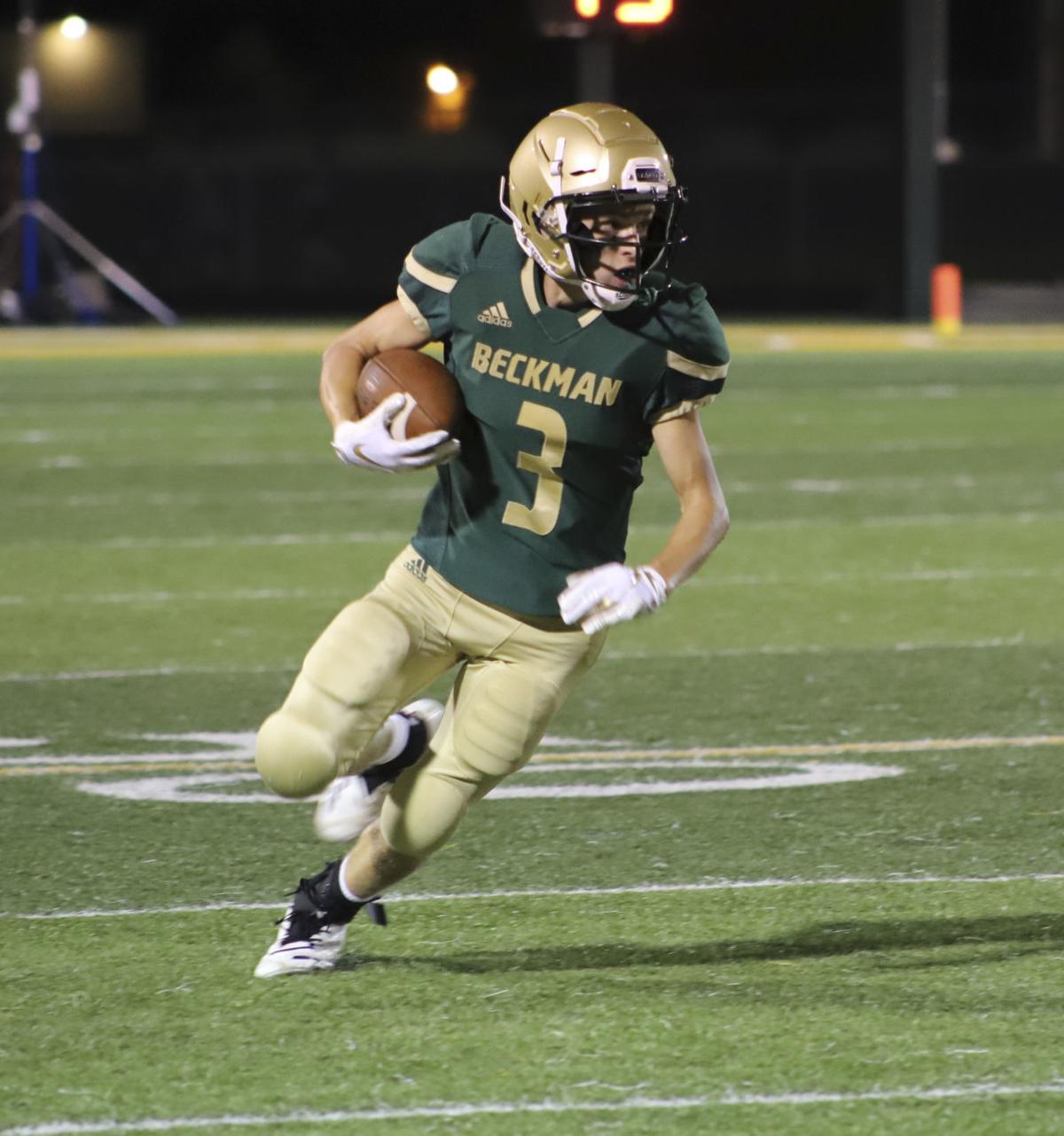 Tom Jaeger picks up a few yards for the Blazers. 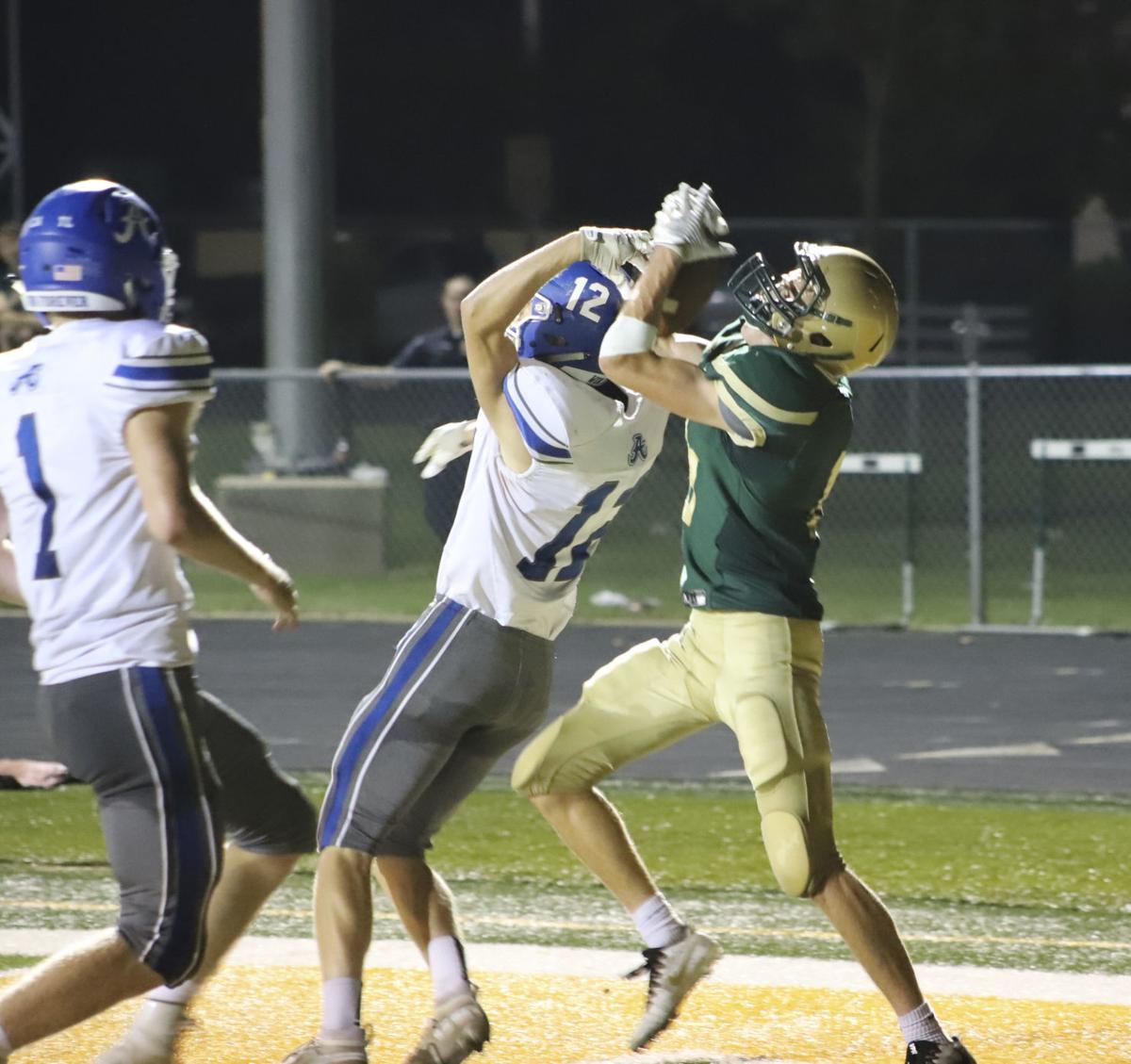 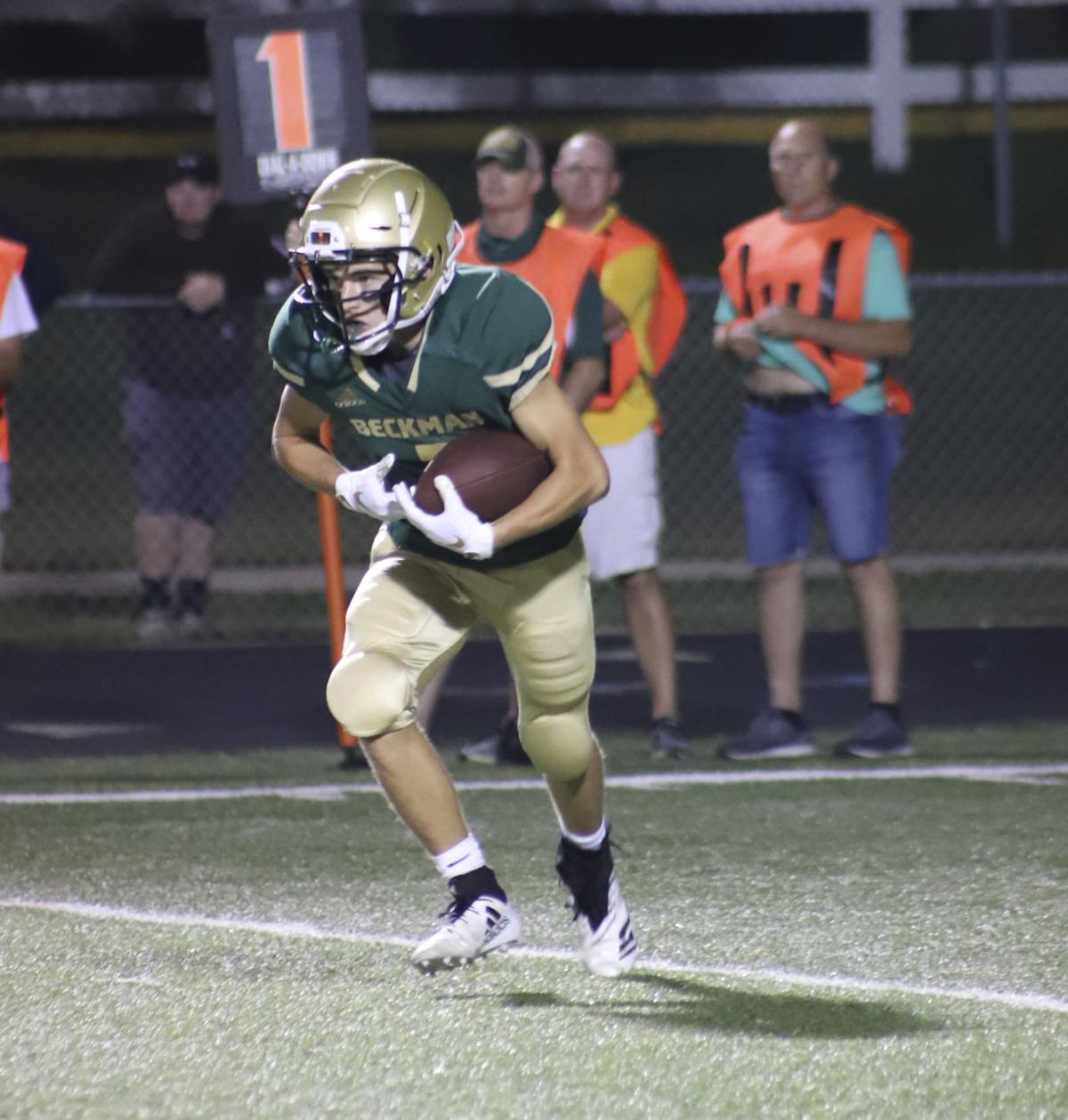 Tom Jaeger returns a kickoff for the Blazers. 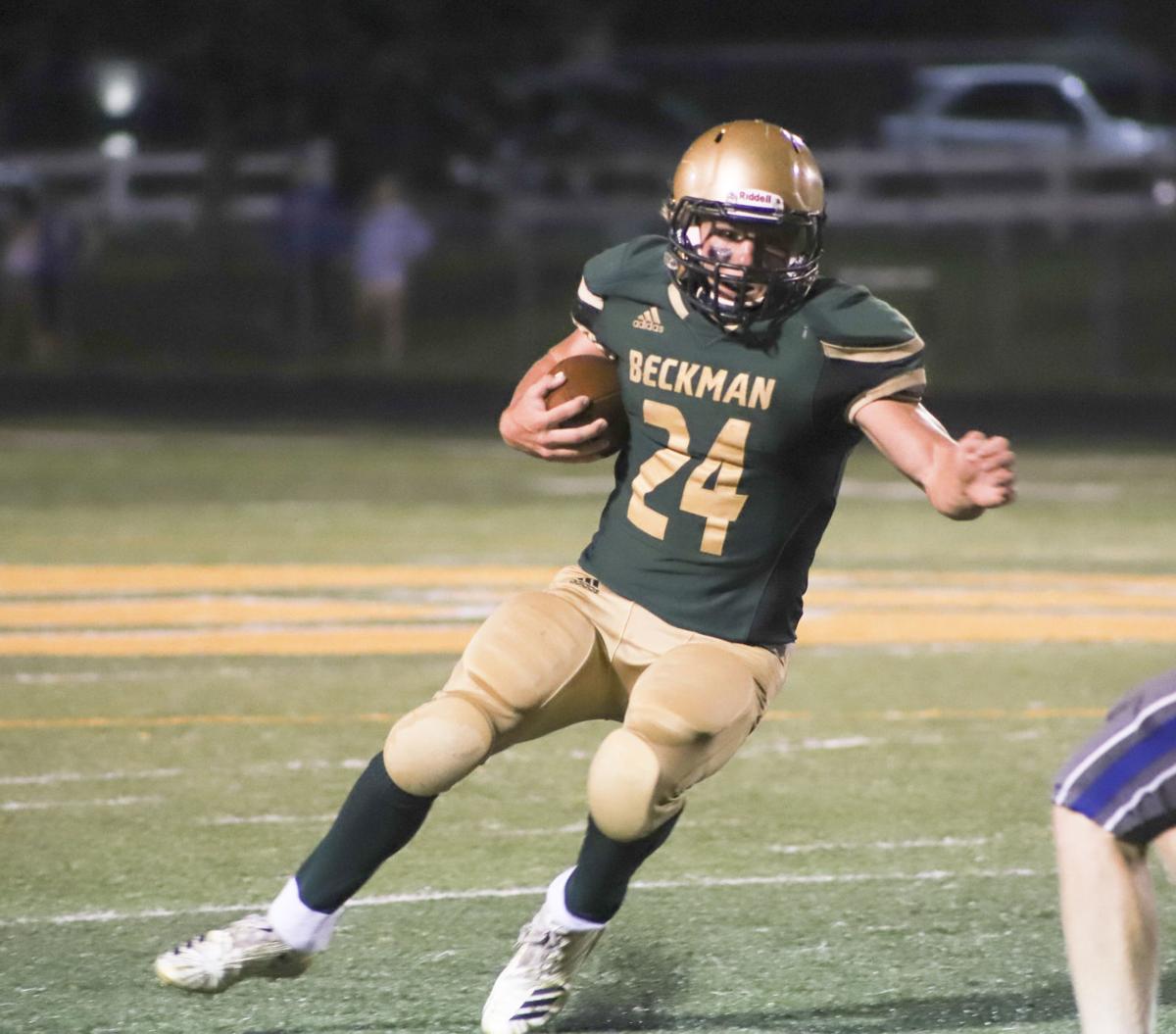 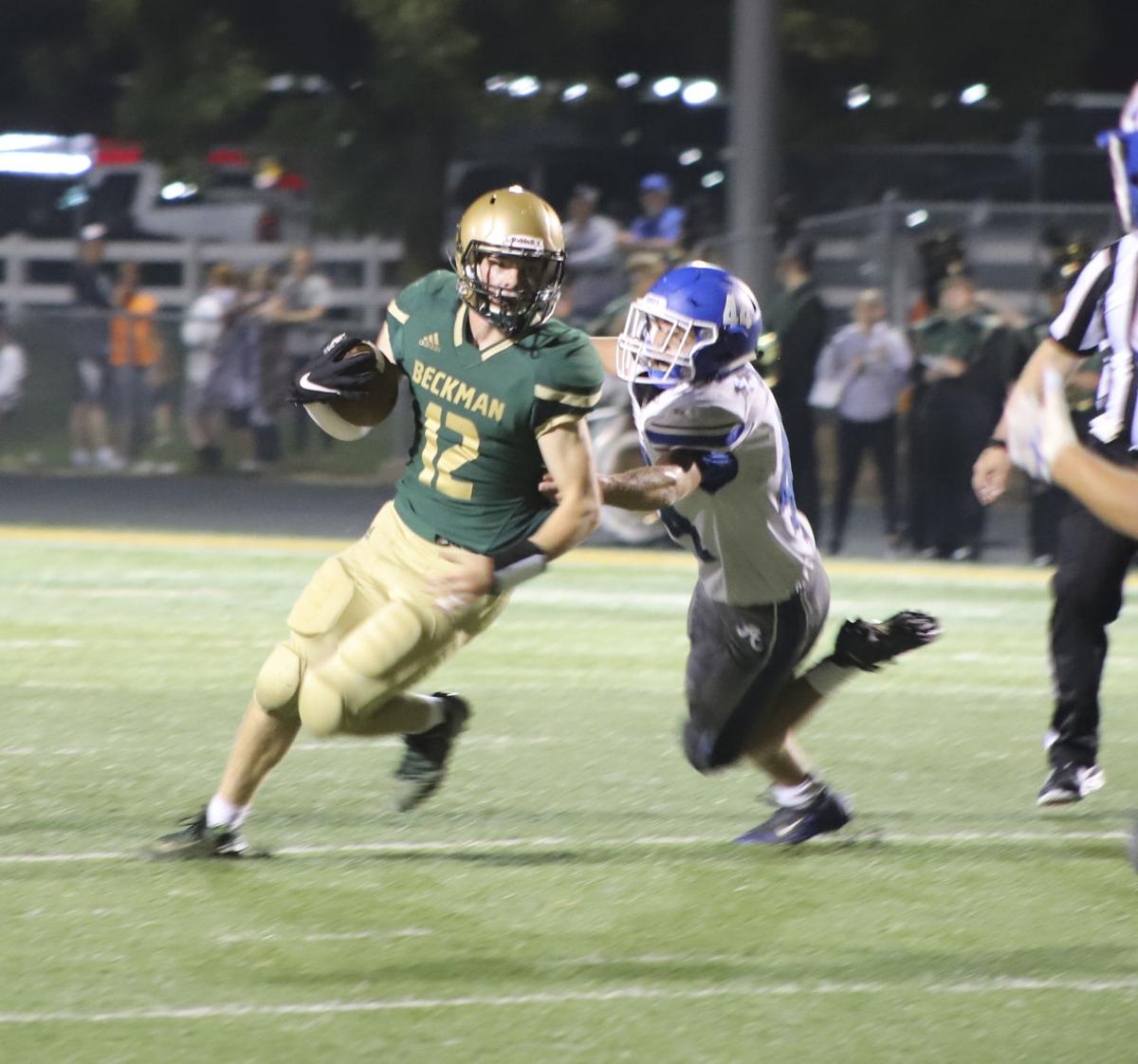 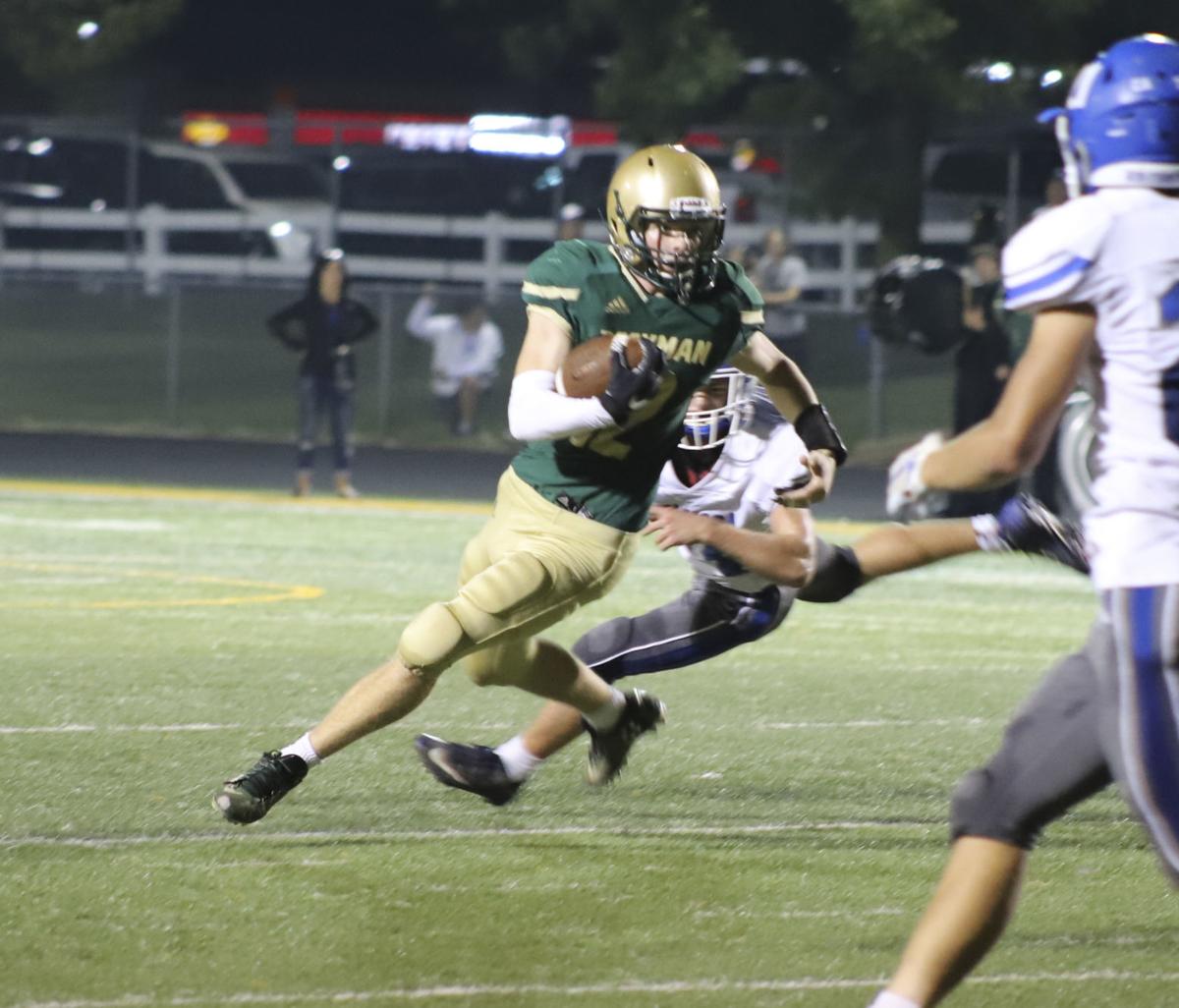 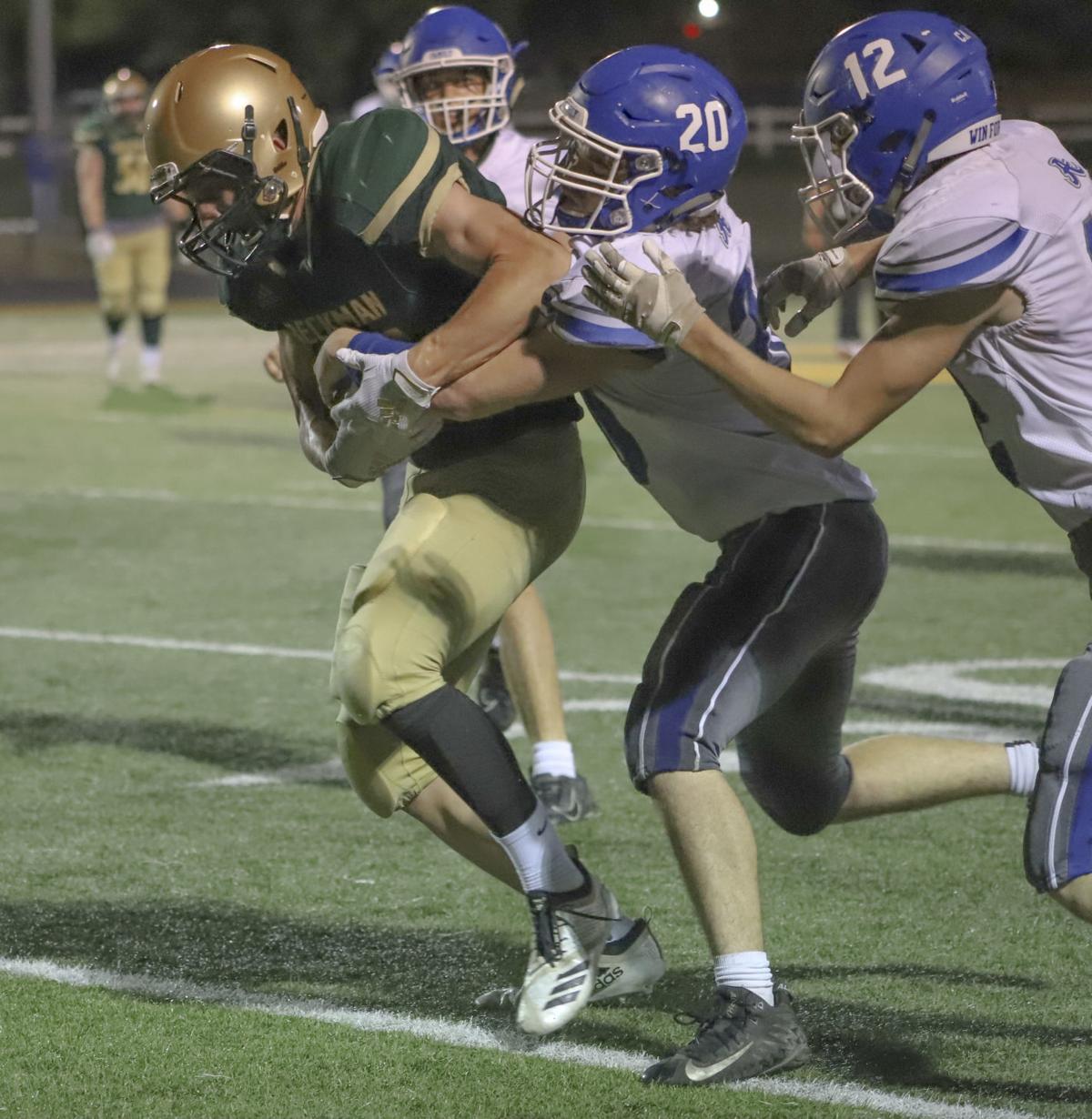 Sean Kluesner attempts to fight off a host of Anamsoa defenders. 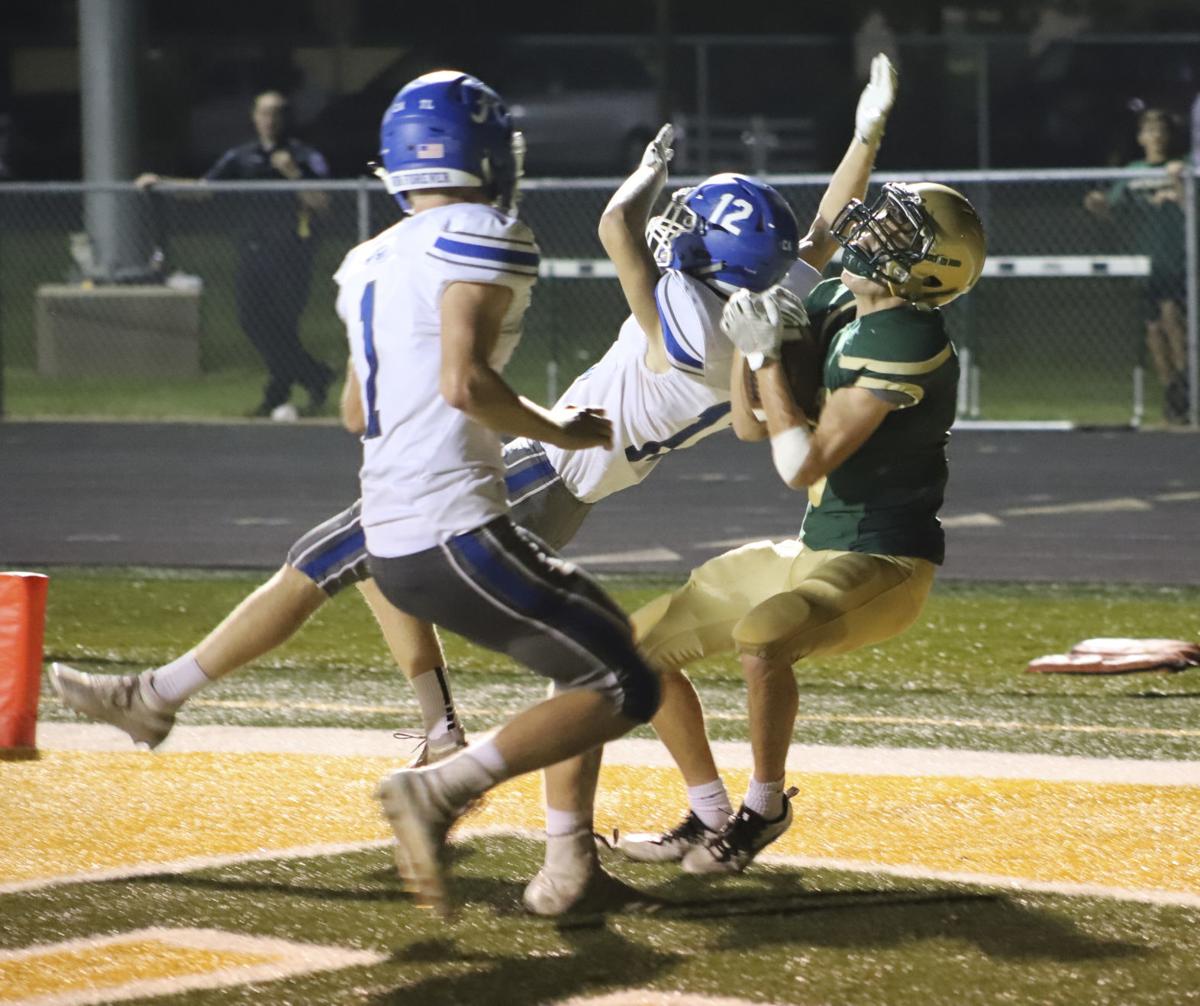 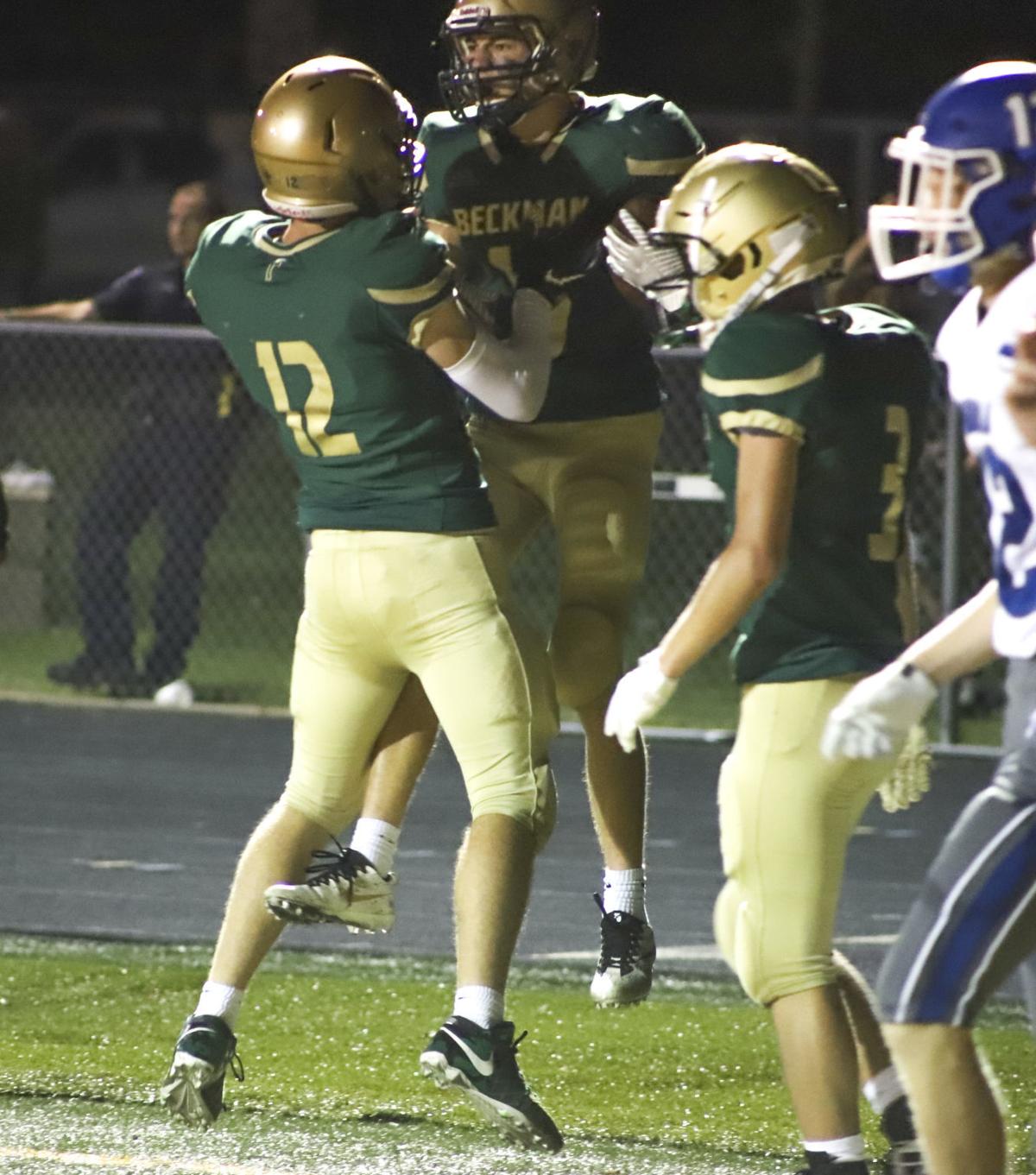 Nick Offerman (12) and Trent Koelker celebrate after they teamed up for the winning touchdown.

Tom Jaeger picks up a few yards for the Blazers.

Tom Jaeger returns a kickoff for the Blazers.

Sean Kluesner attempts to fight off a host of Anamsoa defenders.

Nick Offerman (12) and Trent Koelker celebrate after they teamed up for the winning touchdown.

According to Blazer coach Mark Atwater, “It was another night that wasn’t pretty but we were able to find a way to win.” He was talking about the Blazers’ 16-13 come-from-behind Homecoming win over Anamosa Sept. 20, 16-13.

The Blue Raiders took early control of the game, with a first-quarter 7-0 lead on a Graham Humpal pass to Trae Klatt. It took the Blazers all of that frame and half of the second before Garrett Davis hauled down Humpal for a safety and ended up trailing 7-2 at the half.

“I told the team when we were struggling to get anything going that we just had to find a way. It doesn’t have to be pretty but we just have to find a way. Our guys did just that. I’m proud of them for gritting out a game like that. It shows what kind of a team we really have,” said Atwater.

It still took the Blazers until the fourth quarter to do what their coach wanted them to do. Humpal hit Nolan McLean for a 7-yard score in the third with about eight minutes left. They did miss their attempt at two-points, maybe a sign of things to come.

With 5:02 left in the game, Evan Wulfekuhle completed a drive for an 11-yard score to make it 13-8 when the throw for two points also fell short for the Blazers. They held their fans on the edge of their seats, waiting until the final 44 seconds for Nick Offerman to complete a throw to Trent Koelker for 23 yards and the go-ahead TD. Wulfekuhle ran the ball in for two and the final score.

The stats reiterated the closeness of the game. The Blazers gained 256 yards total, the Blue Raiders 219, on five less plays (62-57). Rushing yards were not stellar for either team: 129 Blazers, 103 Raiders. Penalties hurt the Blazers again this week, 9-for-75 yards.

“Penalties killed us again on returns and set us behind the chains,” said Atwater. “We need to get out of our way and just do the small things right. This was a struggle offensively. We couldn’t get anything going and most of the time we were moving backward.

“Defensively, we battled. Besides two drives they couldn’t move the ball on us. That was a great performance and credit to our kids and coaches to hold up when we needed to on defense. I’m really proud of how we played on that side of the ball.”

That defensive unit accounted for 51 tackles on the night and was led by Wulfekuhle with 8.5 (six solo). Will Brehm accounted for eight (six), Koelker 6.5 (five), Ludwig five (five), Owen Huehnergarth five (three), Jacob Sadler and Bennett English 3.5 (three), Kluesner three (two), Nick Hageman two (two), Fangman two (one), Davis 1.5 (one), Elliot Naughton and Peyton Tauke one (one), Lane Kramer one and Offerman 0.5. Fangman pulled in an interception, English had two tackles for loss, Wulfekuhle, Brehm, Kluesner, Davis and Naughton one.

Atwater concluded, “Next week we move into the district part of our schedule. We are focused on one week at a time. Our district is extremely tough and we look forward to those challenges. We can’t have any off nights or we will end up on the wrong side.”