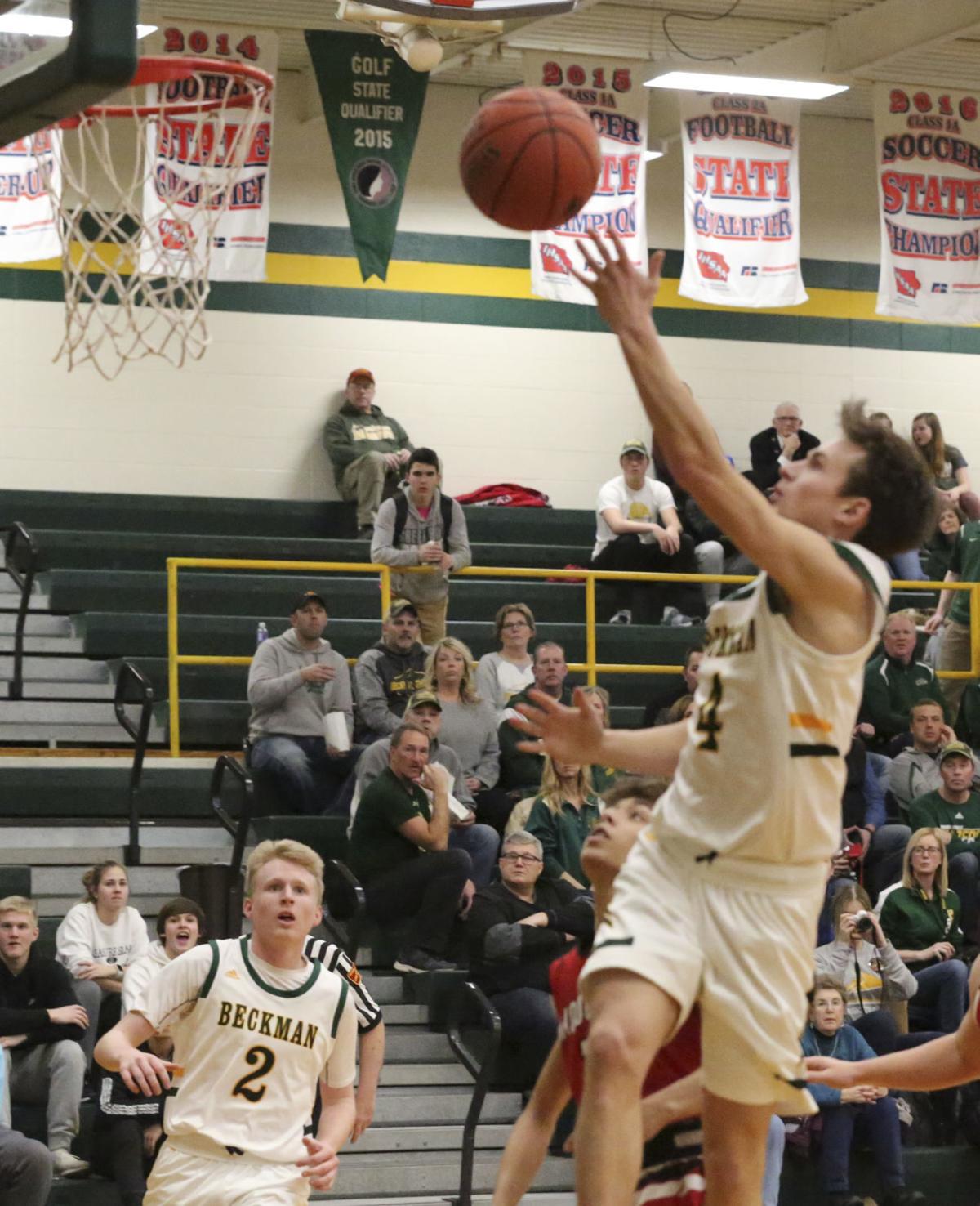 Tom Jaeger goes up for the score against Maquoketa. 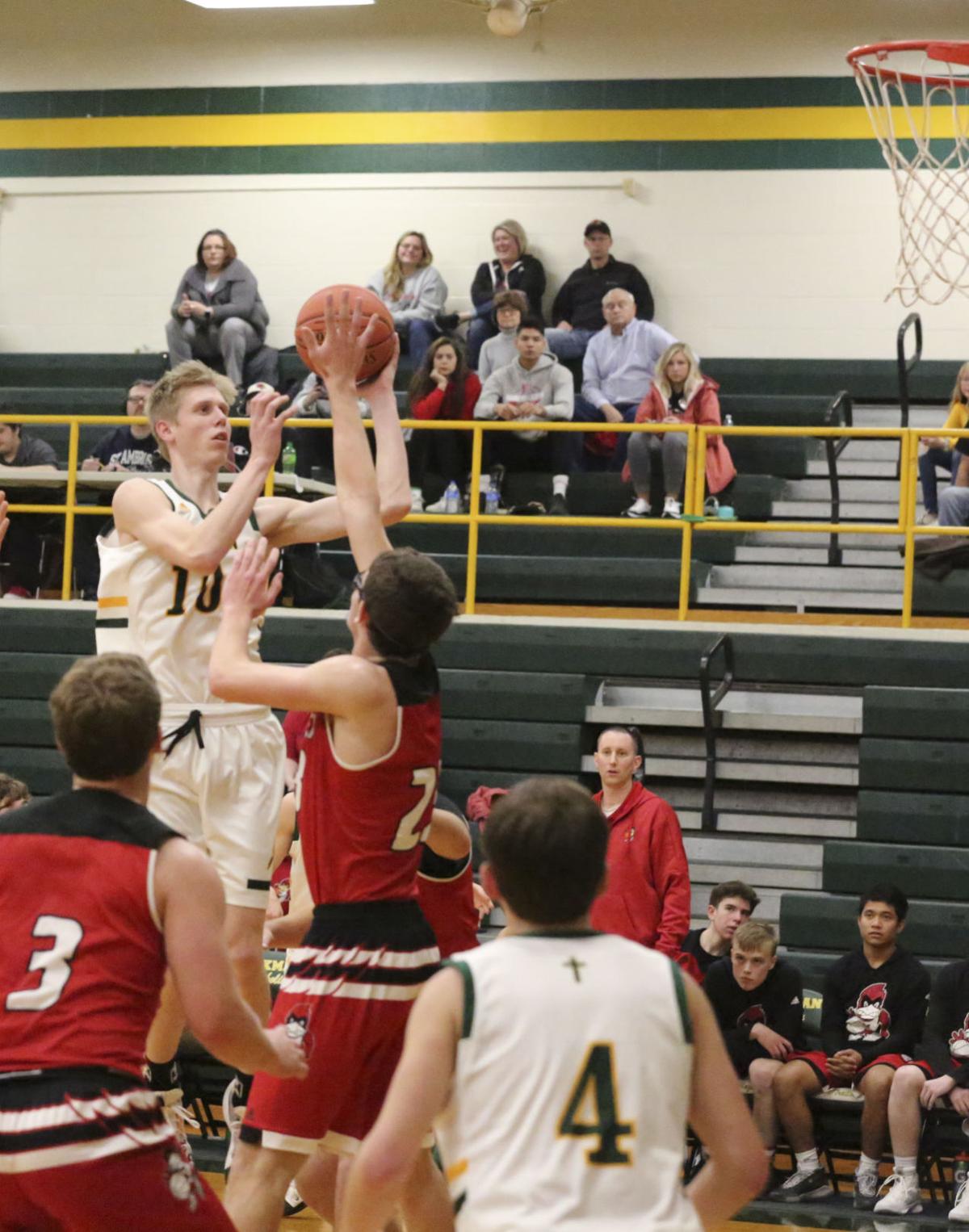 Tom Jaeger goes up for the score against Maquoketa.

A string of 12 straight points wrenched back control of this game and helped Beckman’s boys’ basketball team to a 52-37 win over Maquoketa at home, Jan. 7. The Blazers improved their overall record to 8-1.

The 12 points came mainly from Michael Keegan, who hit back-to-back lay-ins and followed with back-to-back dunks for eight consecutive points to bring the Blazers ahead 34-23 after they led 22-21 at halftime. Keegan ended with 20 on the night, and Luke Goedken, who tallied 16, got two baskets in that quarter that saw the Blazers win the game. They never let the Cardinals any closer than 11 the rest of the way.

The start of the game looked to be going the way it ended. The Blazers used a dunk-and-one when Keegan was fouled on his opening slam for a 3-0 lead. They ballooned that to 14-4 on three Goedken scores, a Keegan three and a Tom Jaeger jumper with over three minutes to go. But the Cardinals proceeded to reel off the next 10 points, using two inline threes from Brad Digman to knot the game at 14-14 at the quarter.

During the second quarter, the Cardinals electrified their crowd by taking the lead, 19-18, on a putback from Clayton Widel. But Jaeger and Mason White answered with a long ball and converted steal to go up 22-19.

Leading 38-27 to start the fourth, the Blazers’ lead dipped a bit on a Kaleb Whaley three, 38-30, but Goedken took a page from Keegan’s book and dumped three straight baskets-plus-one to pad the lead to 46-30. Jack Gehling added an under-the-hoop score and Keegan ended Blazer scoring with four straight free throws.

Coach Michael Molony commented, “This was a great bounce-back performance for us. We started the game well on both sides of the court. We hit a little rut when foul trouble started to mount in the first half but continued to get open shots against their zone that was focused on Michael. We missed a few opportunities that could have pushed the lead into double figures by half time.

“In the long run, Michael was still able to play his game (affecting the game in every statistic including above the rim), but he and his teammates have been most concerned with showing we can win games when the defense’s main objective is to try and slow him down.

“The second half was a key team defensive performance. We swarmed their ball handlers and made it difficult for them to run an offense. This led to a lot of easy baskets for us and brought up our confidence for a needed TEAM win.

“Watching the film, we knew Maquoketa had the ability to play better than they had in the last few games and we expected a spirited effort from them. It’s always important to take one thing at a time in the WaMaC East as the league, top to bottom, is one of the best 3A leagues in the state. We still have a lot to look forward to in the long run and I think our best basketball is ahead of us.”