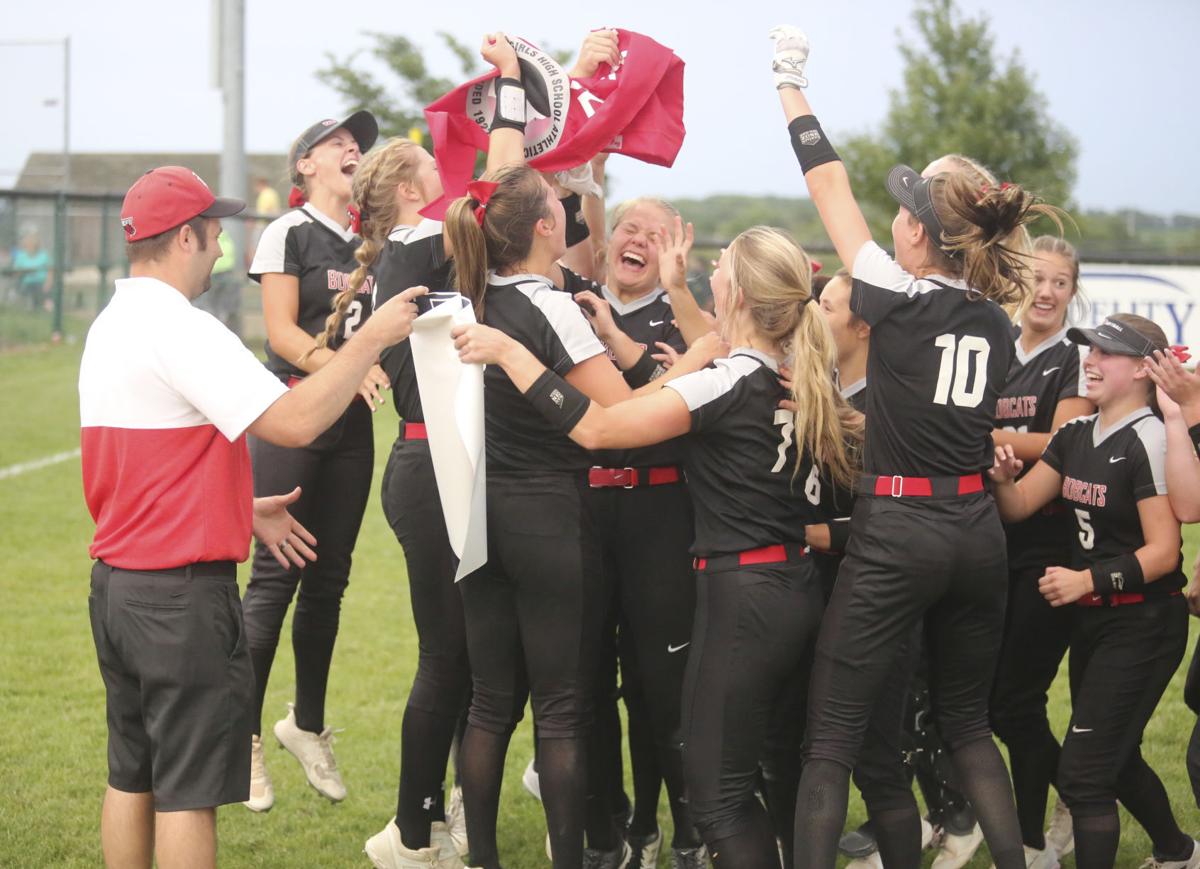 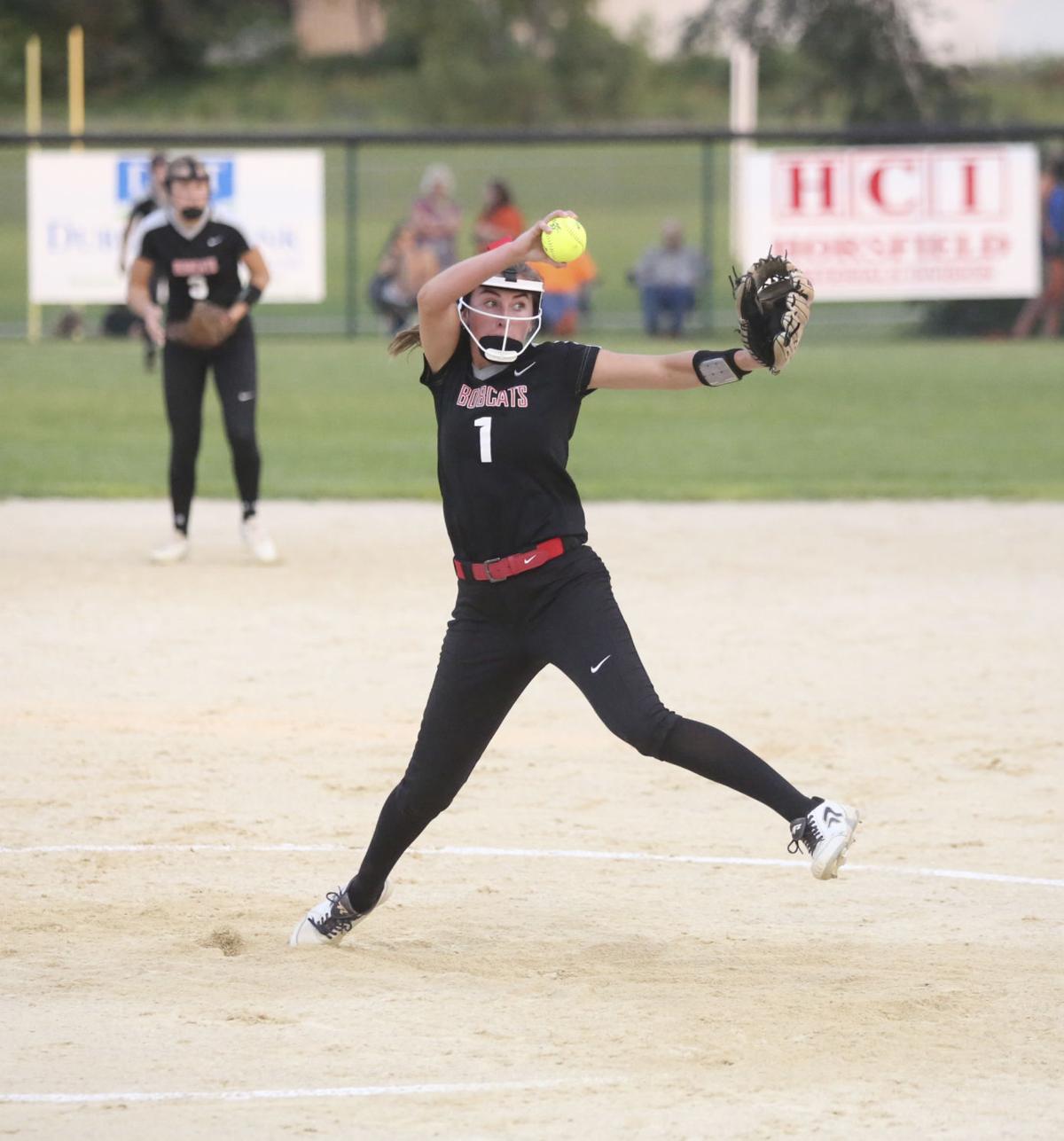 Western Dubuque will make its second-ever appearance in the IGHSAU State Softball Tournament and the first since 2008 after knocking off West Delaware, 6-3, in the Class 4A, Region 7 final, at Farley Park, July 13.

The Bobcats head to Fort Dodge 32-7 in Rex Massey’s first year at the helm, while Wamac Conference East Division runner-up West Delaware — looking to make its third consecutive appearance in the state meet — retires at 28-10. The Hawks had won the previous five meetings between the former WaMaC rivals dating back to the 2017 season.

“It’s been 13 years. I never mentioned the word state all year. That’s never been our goal,” said Massey. “It’s about the kids loving and learning the game of softball, enjoying it and playing hard. That’s what this group did. They played hard every inning of every game and never gave up. That’s the reward you get and we get to play some more softball in Fort Dodge.”

The Bobcats jumped on top early, scoring a pair of runs in the second inning. Maddie Harris singled and advanced to second on Meg Besler’s ground out and courtesy runner Isabel Ernzen stood on third when Brynn Walters reached second base on a Hawk error. Ernzen and Walters scored to make it 2-0 when West Delaware shortstop Alissa Holtz made a terrific backhand stop on Hallie Wilgenbusch’s ground ball, but overthrew first to get Western Dubuque on the board.

It looked like a blowout was in order when the Bobcats extended the lead to 6-0 in the third. Sara Horsfield singled to lead off the inning and Sydney Kennedy was awarded first on a catcher’s interference call.

“I definitely go to the plate confident and knowing if I make contact I’ll probably get on base,” said Horsfield. “Once we get on base, we’ll take those bases and we’ll be aggressive.”

When an infield ground ball off the bat of Abigail Kluesner was mishandled, the Bobcats had the bases loaded with nobody out as the left-handed-hitting Harris stepped to the plate.

Harris’ sharp base hit up the middle then scored Horsfield and courtesy runner Erica Ernzen, and Kluesner made her way home on Besler’s ground out to first base. Isabell Ernzen — running for Harris — scored on a passed ball to put the Bobcats up 6-0.

“We knew we had to just come out aggressively and if we did that we’d be fine,” said Harris.

Kennedy was virtually untouchable for the first six innings, and carried a six-run lead to the seventh. That’s when the Hawks rallied to make things interesting.

West Delaware’s Eva Winn led off with a single up the middle, and when Holtz’s line drive to third was too hot for Wilgenbusch to handle, the Hawks had runners on first and second with nobody out.

The Bobcats then got an out on a fouled pop-up, bringing West Delaware pitcher and No. 9 hitter Erin Mullen to the plate. Mullen drove a 2-2 pitch over the fence in left-center field for a three-run home run to bring the West Delaware bench and fans alive.

Massey visited the mound and had a simple message for his team.

“I reminded them to look at the scoreboard,” he said. “It was 6-3 and we were still ahead.”

Following the discussion, West Delaware leadoff hitter Ella Koloc’s one-pitch at-bat ending in an infield pop-up for the second out dampened the Hawks’ momentum, but Alivia Schulte kept the Hawks alive when she reached on a throwing error, bringing Eve Wedewer — who entered the game hitting .500 on the season — to the plate.

When Wedewer’s short ground ball was fielded in front of the plate by Kennedy — whose throw to first got the final out — the celebration was on.

“It was just three runs and we had one out, so I wasn’t really worried. They’re a good team, but I knew if I focused in on that one pitch I’d come out ahead,” she said. “I was hitting my locations and keeping it out of the meaty part of the zone because we knew they could hit it there.”

“The first six innings were definitely the best Sydney has pitched all year,” said Massey. “She bought into some things we worked on this week and hit locations great. She threw a tremendous game.

“Maddie calls all the pitches and calls the entire game. She’s done that all year. If your pitcher and catcher understand the game and can do that, it makes them more accountable to make their own decisions and when you’re accountable for your own decisions you make better pitches.”

Offensively, Western Dubuque managed five hits. Harris led the way going 2-for-3 with two RBIs. Besler was 1-for-3 with one RBI, Horsfield 1-for-3 and Walters 1-for-3. Wilgenbusch had one RBI.

“It was fun. The biggest thing is our chemistry,” Harris said. “We just need to keep practicing hard and keep playing our game.”

A season in the ultra-competitive Mississippi Valley Conference has this Western Dubuque team ready to make a championship run in Fort Dodge.

“As seniors, this is really important. This whole team has been playing together for a long time and this is definitely what we’ve been wanting for a long time,” said Horsfield. “I think with how close we are it’s easy to win games. We’re all just confident in our abilities and we fight to the end no matter what.”

It’s been a long time coming, but this one erases the postseason disappointments of the past few years.

“It means everything. I’ve been in this program five years and we’ve come up short four times,” Kennedy said. “With this group, we’ve worked really hard in the off-season and we really wanted it for each other. Most of us are best friends, so it’s something special.”

Massey is excited to see how the Bobcats match up with the best in Class 4A.