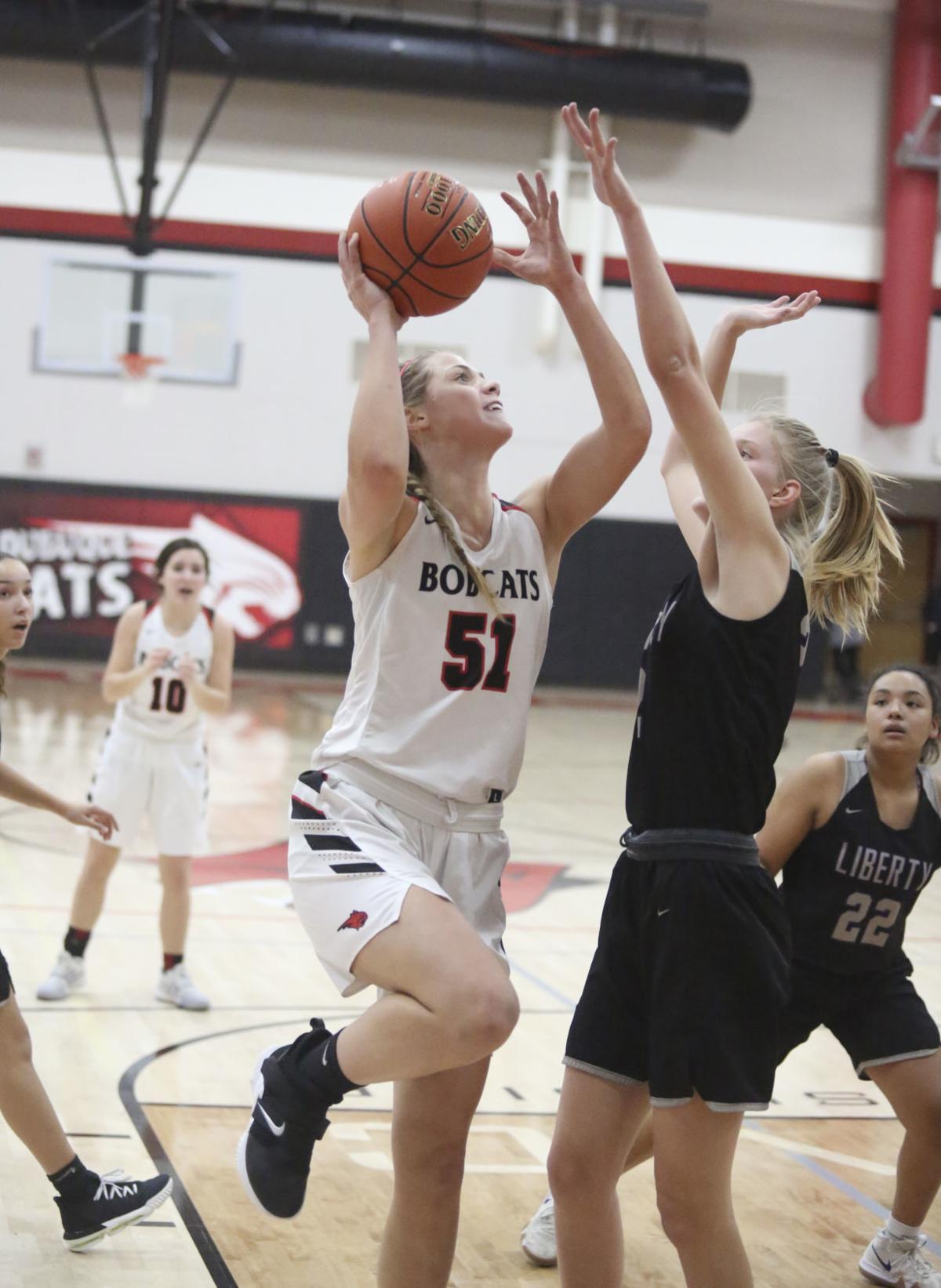 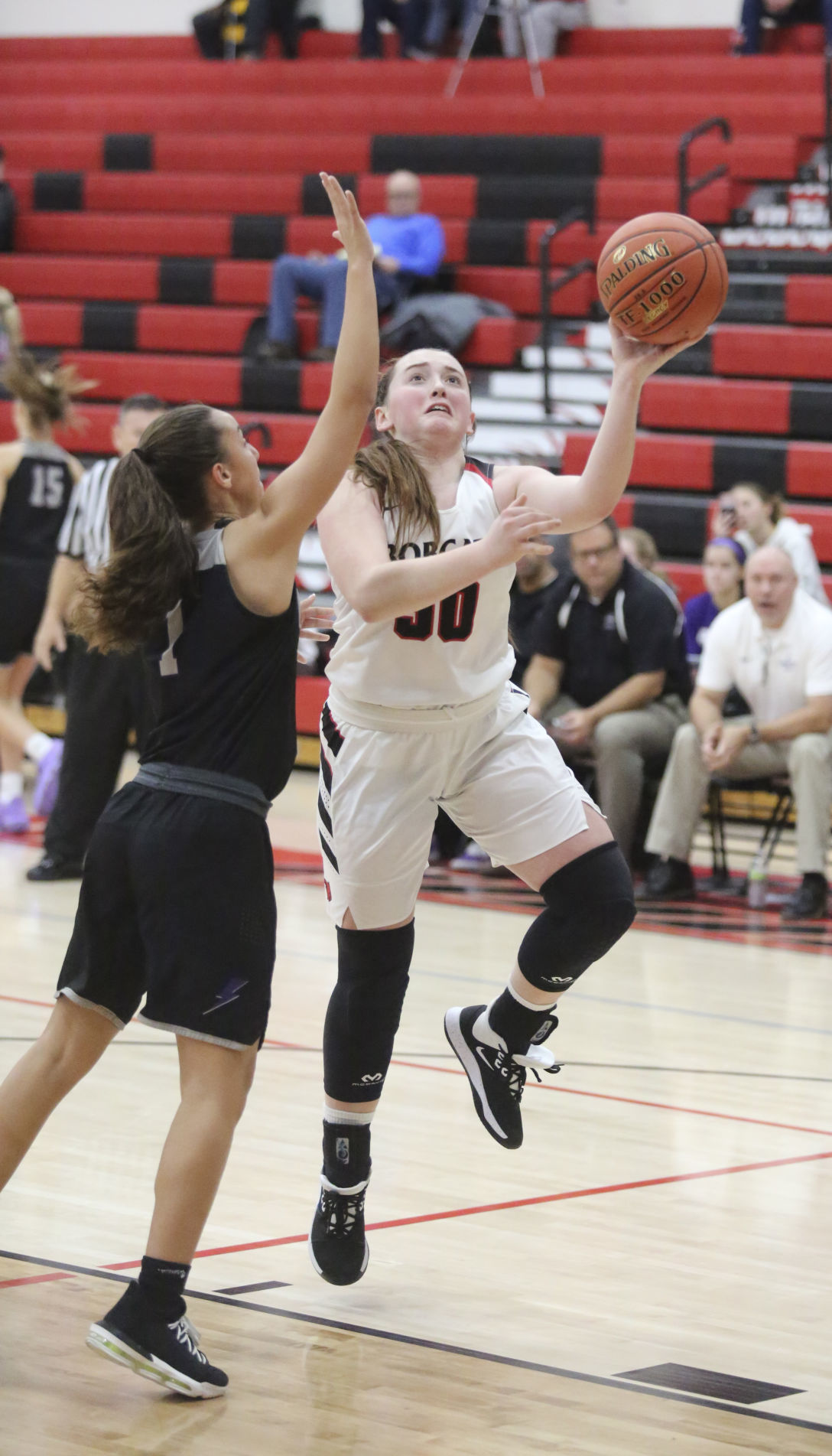 Western Dubuque’s Maddy Maahs gets to the basket.

Western Dubuque’s Maddy Maahs gets to the basket.

Jenna Fiedler scored 18 points and Emma Gile 14, to go along with 17 rebounds, to lead Western Dubuque to a 55-49 win over Iowa City Liberty, at Western Dubuque High School, Dec. 17.

The Bobcats ended a four-game losing streak to improve to 3-4 on the season, while Liberty, coached by former University of Iowa standout Jaime Brandt, fell to 1-5.

“We needed a game where we could get some confidence back,” said Western Dubuque coach Amy Ostwinkle. “It’s been a tough four-game stretch.”

“It’s a good feeling. It’s something we needed to regain some confidence,” said sophomore guard Maddy Maahs, who chipped in 10 points and eight rebounds. “We came out more like a team tonight more than we have in the past. We were all there for each other and were all ready to pick each other up.”

The Bobcats looked to be in command during a fast-paced first quarter and led 16-6 when Abigail Kluesner was fouled as time expired and converted both free throws.

Scores from Maahs and Maddie Harris, plus a long three from Fiedler, had Western Dubuque on top, 23-14, midway through the second quarter. Driving baskets by Maahs and Fiedler had the Bobcats up 27-18, but a pair of late baskets by Liberty narrowed the gap to five, 27-22, at the half.

Gile, Sierra Hill and Maahs all scored from close range to put the Bobcats up nine, 33-24, to start the second half, before Liberty’s Sam McPherson got the hot hand, fueling a 10-0 Lightning run, to give the Bolts their first lead of the night, 34-33, with 3:25 to go in the third.

Gile stopped the bleeding with a nice jump-hook to regain the lead, but Liberty’s Haley Napoli responded with her second three of the half to make it 37-35. Leah Digmann drove for a score to tie it again, but Liberty increased its lead to 41-37 before a late basket by Hill had the Bobcats within two, 41-39, heading to the ourth period.

“It was nice to see the resiliency our girls had after Liberty made that run,” Ostwinkle said. “We’ve had teams that made runs on us and we didn’t respond, but this time we did.”

The Bobcats looked inside to Gile, who tied it up at 41-41 on the opening possession of the fourth, but another triple from McPherson put the Lightning up 44-41. Fiedler answered with a rainbow three of her own to tie it back up, but again McPherson — who led Liberty with 18 points — knocked down a jumper to regain the lead.

After a pair of free throws by Gile knotted things at 46-46, McPherson hit one of two to give Liberty its last lead of the night, 47-46. Maahs hit the second of two free throws to even the count, and Fiedler put Western Dubuque back on top 49-47, hitting a short jumper with under two minutes remaining.

“I’m confident in my shot and my ability to score,” said Fiedler. “When my team needs me I’m going to do it.”

When Liberty was forced to foul, the Bobcats hit 6-of-8 free throws the rest of the way to earn the 55-49 win.

“We do a lot of partner free throw shooting in practice. It’s helped.,” said Gile, who knows this team is a work in progress. “We ran our offense well, but we still have work to do on defense.”

“We try to put the girls in situations in practice where it’s a one-and-one or their teammates are waiting for them to make two in a row,” added Ostwinkle. “Just doing those things and mentally preparing them helps.”