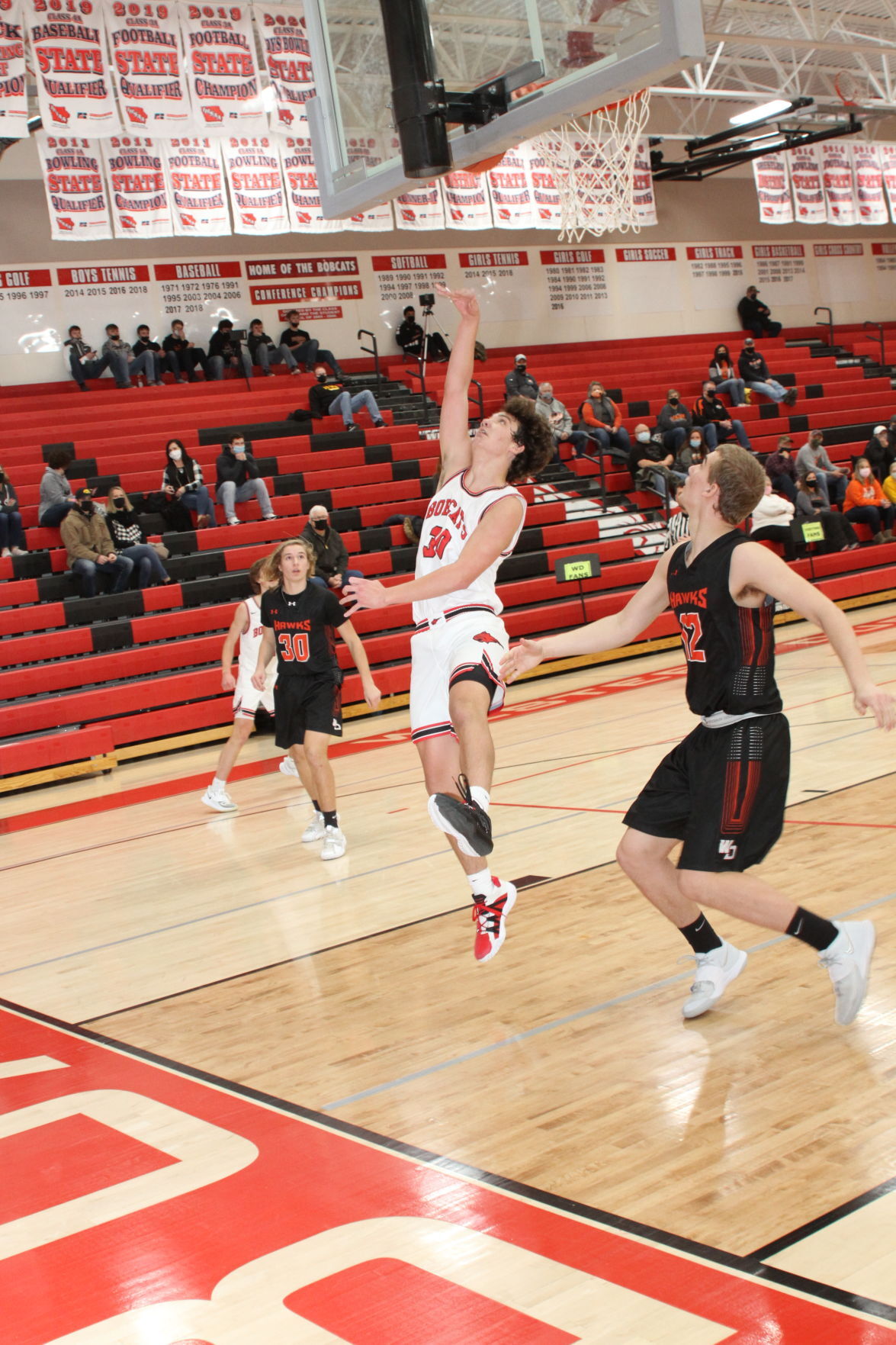 Carson Schute puts up a tough shot off the glass to score two points against West Delaware. 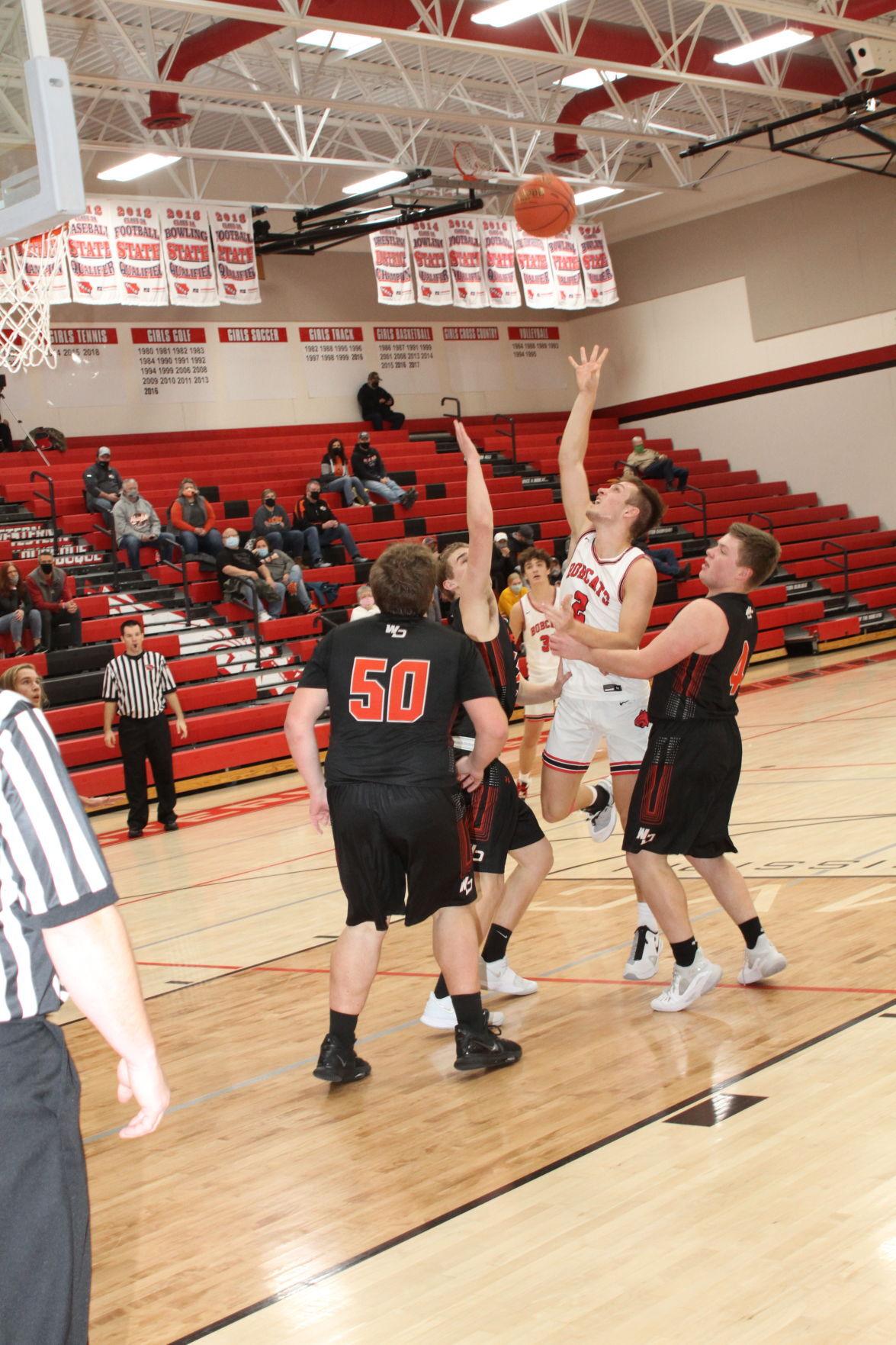 Carson Schute puts up a tough shot off the glass to score two points against West Delaware.

Garrett Baumhover got loose for 17 points as he led the Western Dubuque boys’ basketball team to a 76-48 trouncing of West Delaware in a non-conference affair at Epworth, Jan. 2.

Nick Bryant added 12 while Tommy DeSollar and Dylan Johnson both chipped in 11 as the Bobcats roared out of the holiday break with an impressive win to improve to 6-1 for the season.

“We had a lot of good practices over break and the guys were just ready to play against another team,” said Ben Wilson, assistant coach of the Bobcats. “The guys took that loss going into break to heart. They just wanted to come out and show everyone that that loss was just a blip on the radar. They want everyone to know that we are for real this year. We’re going to play hard and we have a lot of weapons out there.”

One of the ways this group of Bobcats is different from other Western Dubuque teams is the defensive pressure they have been able to put on their opponents. Going into this game the Bobcats had allowed 44.5 points a game and the most points they have allowed all season in one game is 50.

“We just dogged them defensively for about three quarters. We wanted to turn them into a jump shooting team and we know that they only put a couple good shooters out onto the floor,” said Wilson. “We wanted to make it hard on (Kyle) Kelley. We know that he’s a heck of a player and we didn’t want to give him any good looks so we put Garrett on him.”

Not only did Baumhover lock Kelley up, holding him to just one made basket in the first half, but he was hot from the field, scoring 13 points in the first quarter including three three-pointers.

“When he’s hitting like that we are going to be tough to beat. He is a really, really good player,” said Wilson about his senior floor leader. “When he hits shots, distributes like he does and the pressure he can apply defensively. He’s just one heck of a point guard in our league and in the state.”

West Delaware actually held a 2-0 lead after the first minute of play, but the next 31 minutes were all Bobcats. Most of the fireworks came from long range as Baumhover got things started with his threes in the first quarter to set the tempo for the game. Carson Schute and Dylan Johnson added threes in the first quarter as the Bobcats jumped to a 21-6 lead. The Bobcats made eight of their 10 three-pointers in the first half to stretch the lead to 40-16 at halftime and started to empty the bench before the end of the third quarter. The Bobcats’ bench built the lead to 30 points before finishing off the Hawks, 76-48.

“Offensively, we wanted to take advantage of some mismatches that we had so the plays we ran were designed to take advantage of those mismatches,” said Wilson. “Yes we had four players in double figures, but we also had Carson Schute and Jackson Ingselbe both with eight points. We had tons of guys contributing. Everybody’s knocking down shots and then when we go to the bench there’s no drop off. Those guys just play so hard. We just continue to bring energy off the bench and that’s the best part for us as coaches, when we put those guys in there and we know that we’re not letting up on the accelerator at all.”