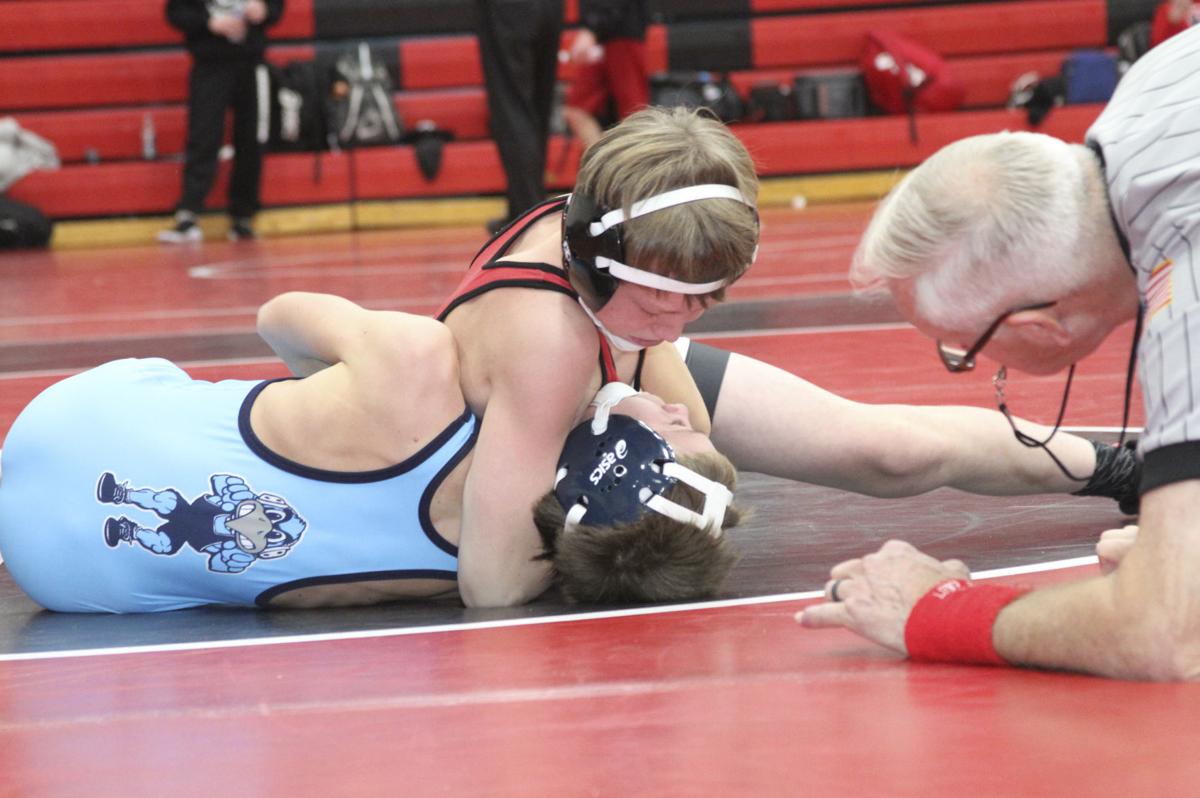 WD’s Jagger McCool (106) gets his opponent into a dangerous position. 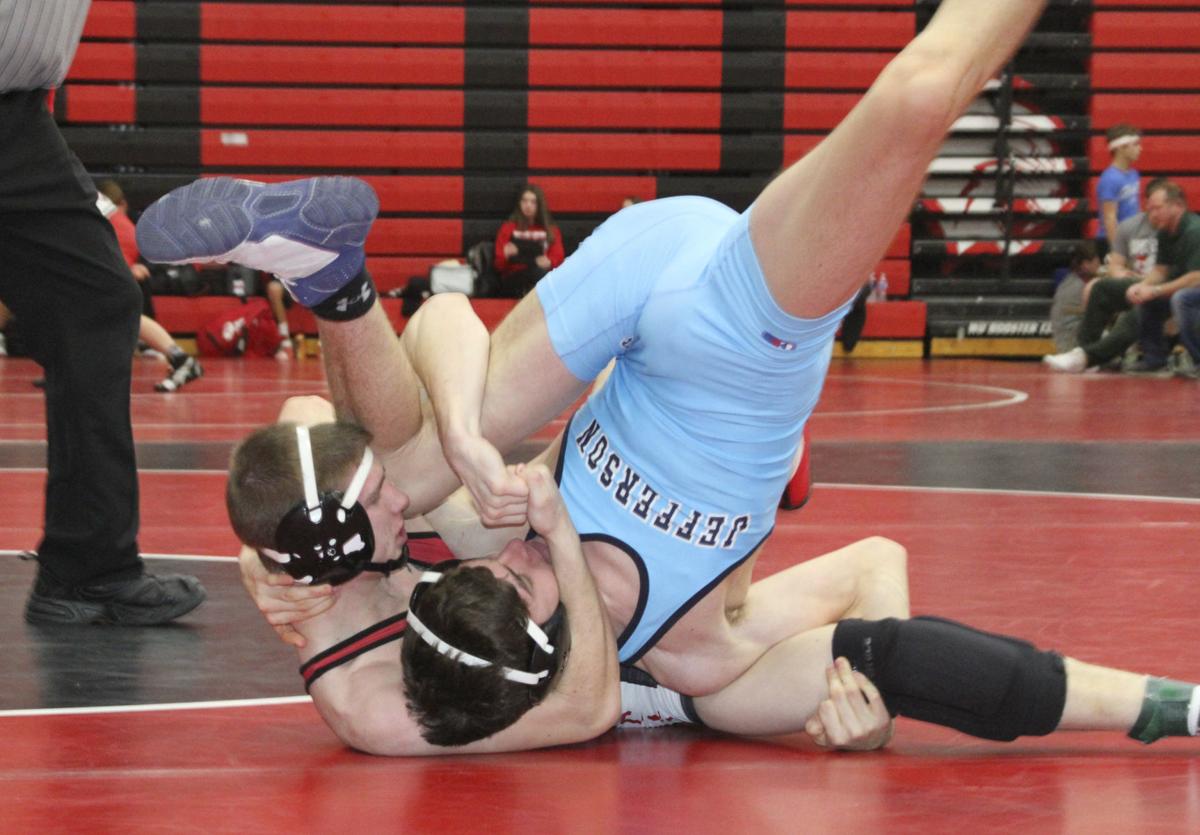 Jared Cordes (138) out works his opponent to get the pin. 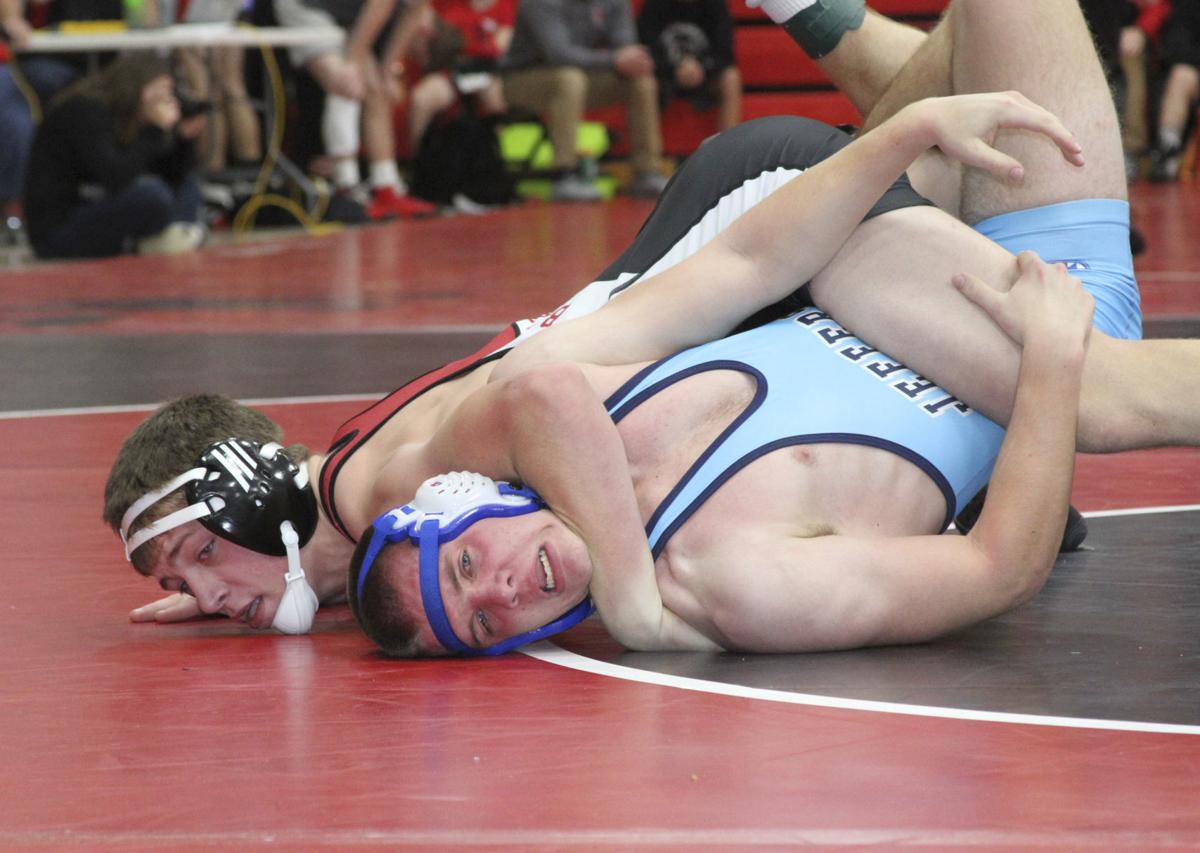 Evan Surface (160) works hard to pin his opponent during the Bobcat Duals held in Epworth, Dec. 14.

WD’s Jagger McCool (106) gets his opponent into a dangerous position.

Jared Cordes (138) out works his opponent to get the pin.

Evan Surface (160) works hard to pin his opponent during the Bobcat Duals held in Epworth, Dec. 14.

Yes Virginia, high school wrestling is a very exciting sport. Just ask anyone who attended the Bobcat Duals hosted by the Western Dubuque wrestling team in Epworth, Dec. 14. Even though the home team didn’t come out on top, WD’s wrestlers learned a lot while wrestling some of the top talent in the state.

Southeast Polk won the Bobcat Duals going 5-0 for the day and Dakota, Ill., was 4-1 to take second. Williamsburg went 3-2 for third and the Bobcats were a respectable 2-3 on the day to take fourth place. Earlier in the week, Western Dubuque defeated Iowa City, City High 45-28 Dec. 12.

“We won a bunch of swing matches because a lot of the young guys stepped up. That was a big dual for us,” said Paul Cleary, head coach of the Bobcats, about his team’s dual win over Iowa City. “People don’t understand that we only have two starters in our lineup from last year’s team. We’re green but we’re getting better and getting this win was big for us.”

There were a lot of interesting matches held during the Bobcat Duals. Eight teams showed up for battle and they did not disappoint.

The Bobcats handled Central DeWitt, 58-18, and Cedar Rapids Jefferson, 53-27, in pool play but dropped their last match to Southeast Polk, 66-15, to take second in their pool. Moving into the championship bracket, the Bobcats lost to Williamsburg, 55-18, and Dakota, Ill., 66-5, to earn their fourth-place finish.

“This is what high school athletics is supposed to be. It supposed to be about kids going out wrestling hard, competing with their buddies and having fun. That’s what this environment is all about. There are some great teams here, some incredible coaches, some great people and these kids are creating memories they will have for the rest of their lives,” said Cleary after his team battled against Southeast Polk. “Our creed is heart, intensity and class and the three guys that got us wins against Southeast Polk showed some heart. Ben Schueller showed great heart along with Carter Kluesner and Jake Hosch, who’s a great leader for us, demonstrated that as well.”

All three of those wrestlers won their matches in exciting fashion. Schueller fought his way into overtime and scored a takedown to get the win. Kluesner battled from behind to pin his opponent and Hosch’s match was a special treat for the crowd as it featured the second ranked wrestler in Class 3A against Justin Brindly, ranked fourth in Class 3A. Hosch was down 4-3 in the third period and earned a restart with four seconds left. On the whistle, Hosch executed a reversal move that looked to get him two points and the win, but it was ruled that he only earned one point for an escape thus forcing overtime. During the extra minute, neither wrestler was able to get a grab on the other until Brindly looked to have a hold of Hosch who he attempted to bring backward to the mat. With the clock again ticking down, Hosch held his balance and quickly flipped himself on top of Brindly whose shoulders hit the mat giving Hosch the win by pin just as the clock timed out.