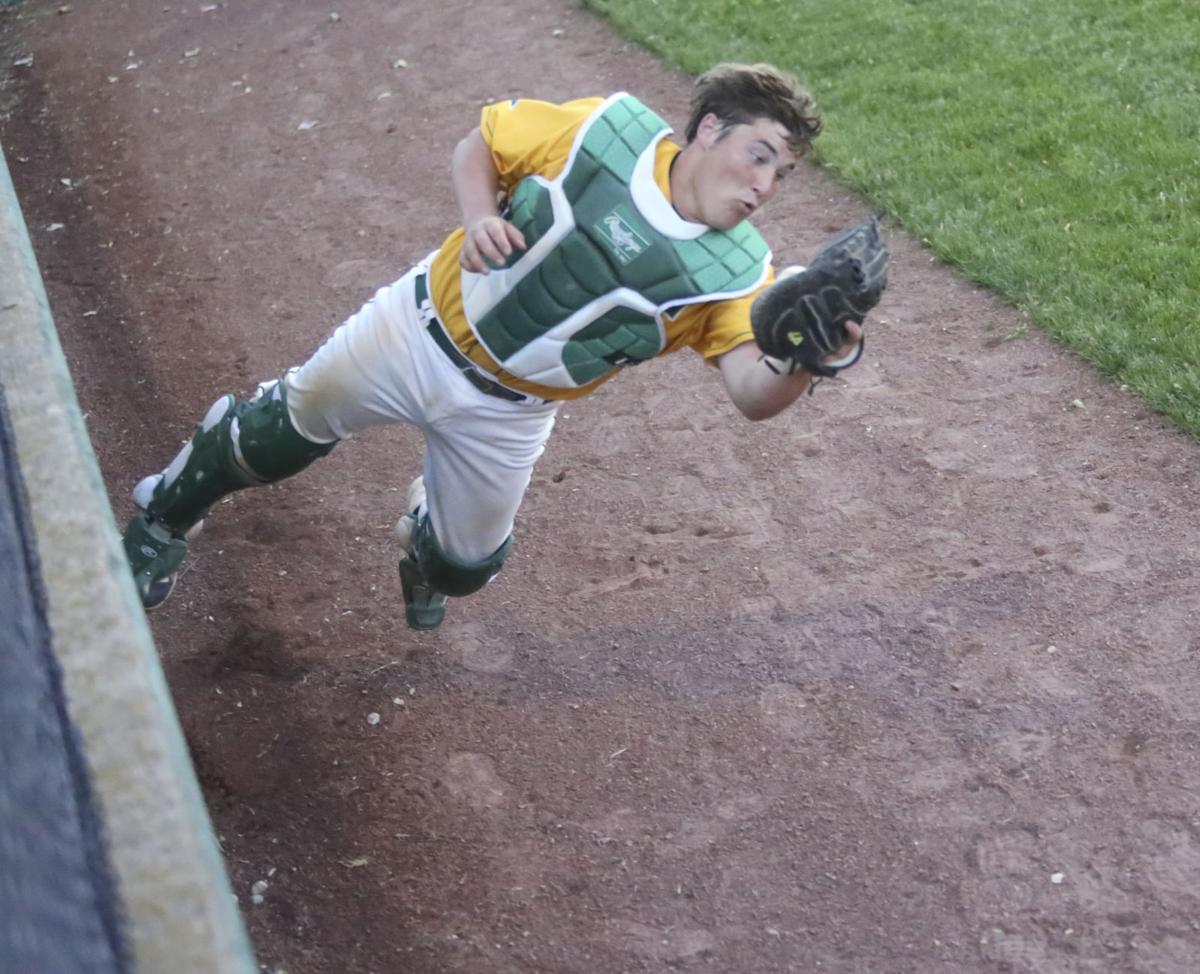 Owen Huenergarth makes a diving catch near the screen during Western Dubuque’s 5-3 win over Beckman, at Farley Park, June 2. 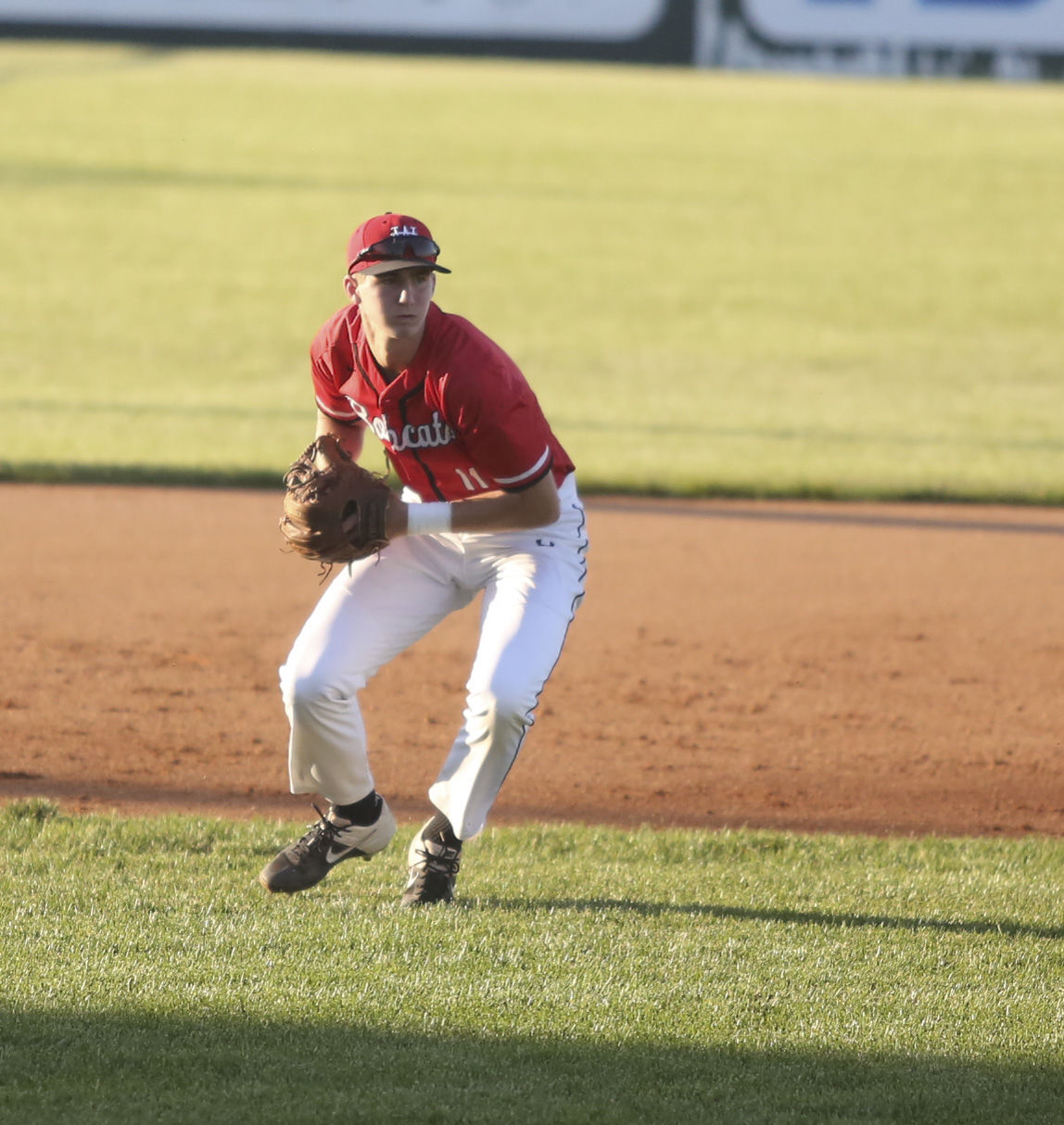 Owen Huenergarth makes a diving catch near the screen during Western Dubuque’s 5-3 win over Beckman, at Farley Park, June 2.

Farley Park was the place to be June 2, as a big crowd saw Western Dubuque outlast Beckman, 5-3, in an entertaining contest on a picture-perfect summer evening.

This one wasn’t a thing of beauty by any means, but with a pair of young ball clubs on the field, both coaches found plenty of positives in an early-season contest between two teams searching for an identity.

“The ceiling is we can be a really good team if we continue to improve and we’ll learn from tonight,” said Western Dubuque coach Casey Bryant. “That’s why I love playing Beckman. Every time we play them, they’re going to find a flaw because they’re so well-coached and they’re such a great program.

“They’re going to find a flaw even in a game they lose and expose it, so playing them is better for us than playing a weaker team and getting a 10-run win.”

Beckman coach Fred Martin liked the way his Blazers competed on the big stage, and knows his team benefits from seeing opponents of Western Dubuque’s caliber.

“It was a great atmosphere. This is what we love — we love playing Western Dubuque,” Martin said. ”It was a fun game. We knew it was going to be a good game.

“Most scenarios I was very pleased with. We need to clean the errors up a little bit, and we gave them a couple extra ones there, but they’re a really good team.”

The Bobcats got on the board in the first inning. Leadoff hitter Garret Baumhover singled before cleanup man Bryn Vantiger drew a two-out walk. When courtesy runner Logan Brosius attempted to steal, the Blazer’s throw to second ended up in center field and Baumhover waltzed home to give Western Dubuque a 1-0 lead.

Beckman bounced back with two scores in the top half of the second, beneficiaries of four Western Dubuque walks. Nate Offerman greeted Bobcat reliever Ryan Klostermann — who took over for starter Issac Then with two outs — with a single that plated Jackson Oberbroeckling, who led off the inning with a single of his own. Nick Schmidt’s bases-loaded two-out walk scored Cameron Krapfl and gave his team a 2-1 lead.

Baumhover led off the Bobcat third with a double to left-center, and when Vantiger singled, it was tied 2-2.

Both teams scored in the fourth. Beckman’s Max Mullis singled and scored on a base hit by Luke Schieltz and Western Dubuque’s Tucker Nauman doubled off the left-field wall and scored on a wild pitch to even things at 3-3.

Klostermann found the groove the rest of the way, retiring the final nine hitters he faced, while the Bobcats scored single runs in the fifth and sixth.

Then singled and scored on Tucker Nauman’s ground ball in the fifth, but Beckman reliever Lane Kramer worked his way out of a bases-loaded jam to keep the Blazers within striking distance.

Sawyer Nauman singled and scored on Tyler Weidenbacker’s sacrifice fly to left field to make it 5-3 in the bottom half of the sixth, and Klostermann — who went 5 and 1/3 innings for the win — sat Beckman down in order in the seventh.

“That’s what he does,” said Bryant of Klostermann. “He works fast, throws strikes and gets a ton of ground balls. He’s got great movement and the ball rides in on people. He’s got kind of a short-arm delivery, so the ball’s on top of them before they know it. He’s going to be a good pitcher for us.”

Martin was happy with the work of his pitchers, as Ryan Burchard went 3 and 1/3 — allowing three runs on five hits — before yielding to Kramer in the fourth.

“I learned a lot about a couple pitchers that came in for the first time this year. They did a very good job,” Martin said. “Playing a lot of games forces you to put guys in there and give them a chance. I was very pleased with where Ryan was at and Lane came in and threw well. It was a good game.

“We’re very young. I’m happy with where we’re at right now if we just clean up the errors a little bit. We’re young, we’re learning and we’re progressing.”

Bryant knows the Bobcats are a work in progress and his team is learning every night.

“They did a good job getting their off-speed across the plate and we weren’t very disciplined at the plate. We’re a young team and we’ll overcome that,” Bryant said. “Honestly, offensively we didn’t play very well. It’s the first time a team really junked us up, and it’s going to be good for us. We’ll learn from it.”