Log In Sign Up
You are the owner of this article.
Edit Article Add New Article
You have permission to edit this article.
Edit
Home
Your Account
News
Opinion
Sports
People
Obituaries
Calendar
Public Notices
e-Edition
Classifieds
Perks 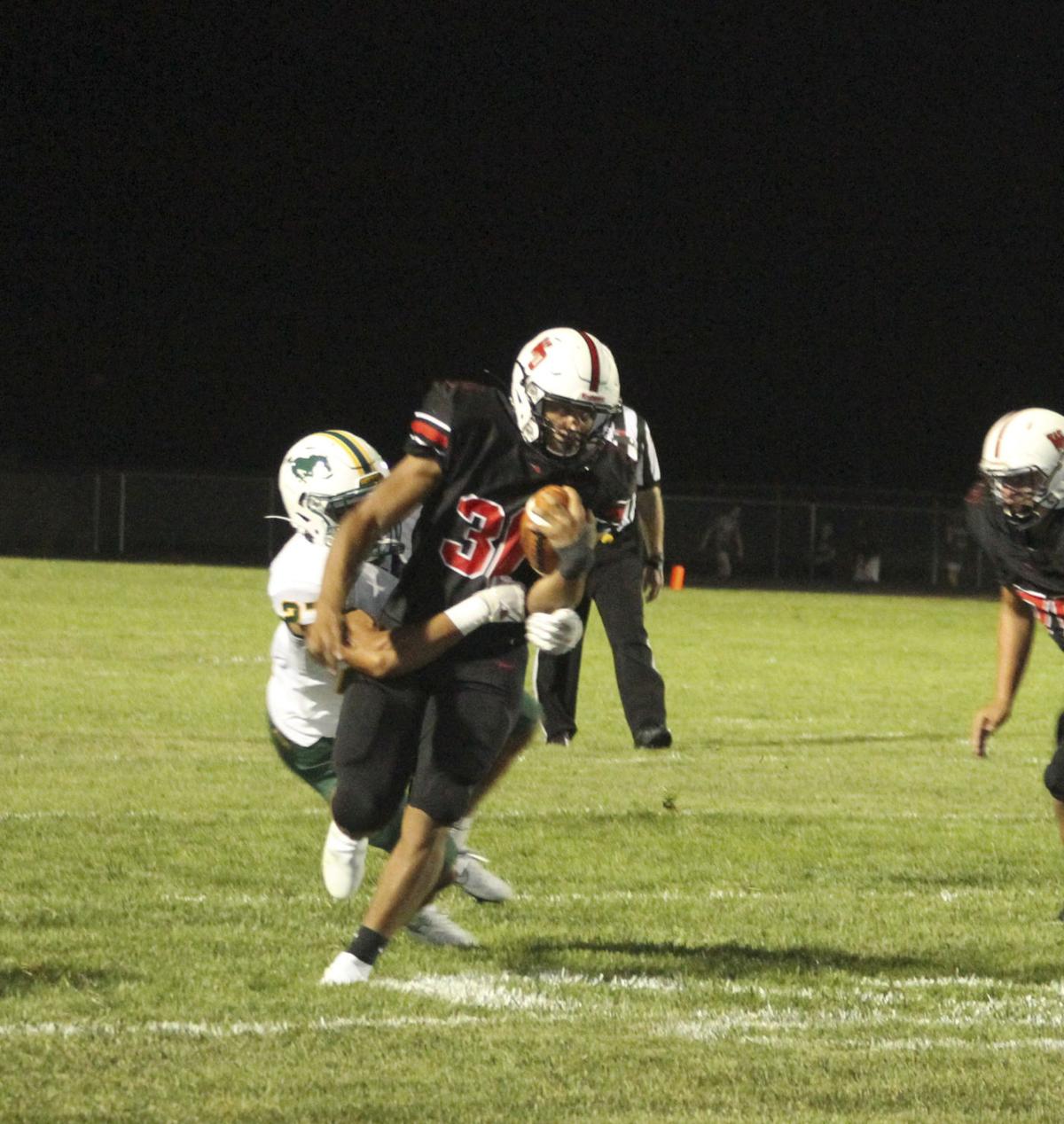 Spencer Zinn tries to break out of a tackle in the first quarter of Western Dubuque’s 40-37 come from behind victory over Hempstead. 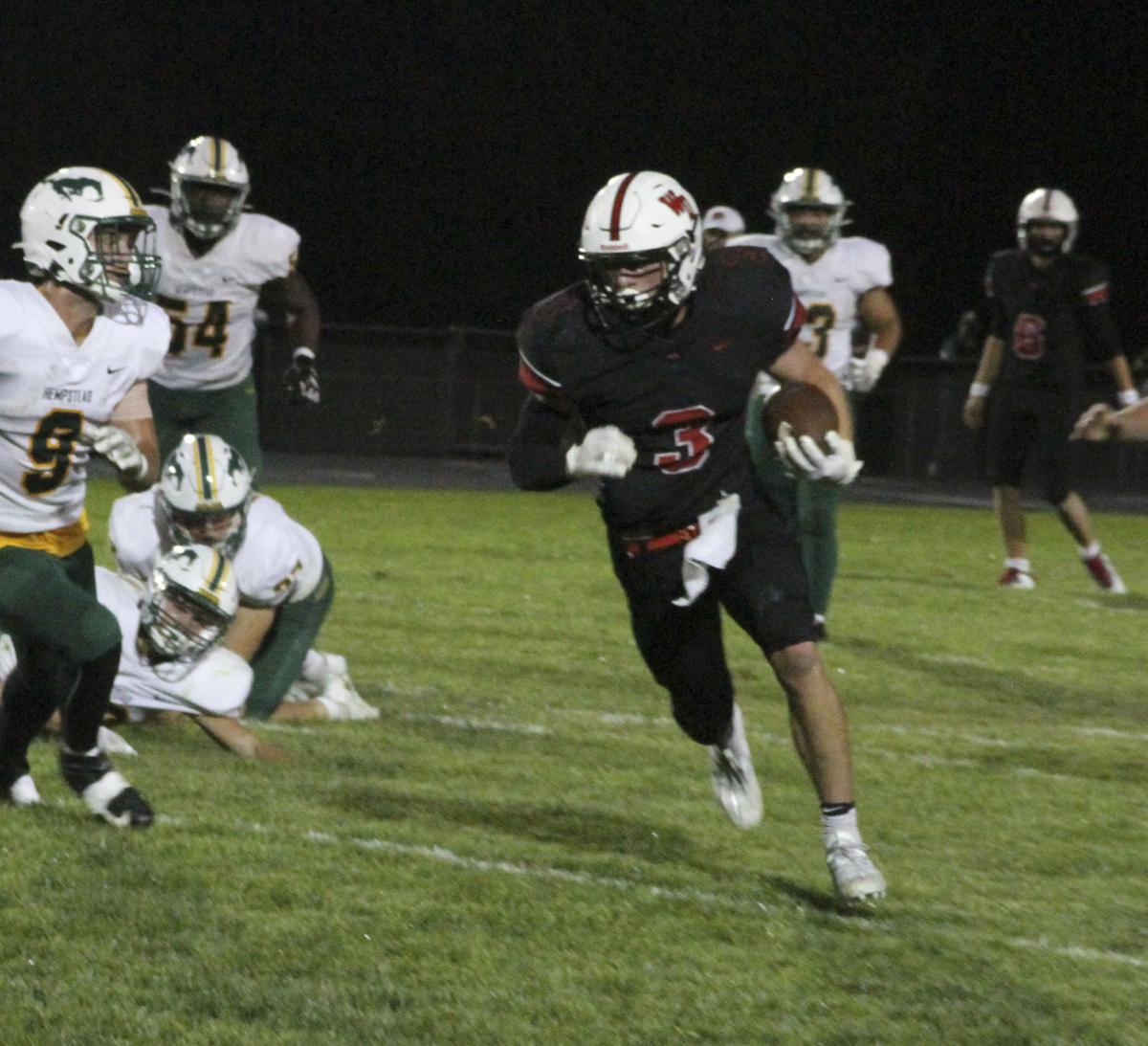 Spencer Zinn tries to break out of a tackle in the first quarter of Western Dubuque’s 40-37 come from behind victory over Hempstead.

It’s nothing the Bobcat faithful haven’t seen before. Big offensive plays and timely defensive stops once again helped the Western Dubuque football team pull out a win as the Bobcats defeated Indianola, 21-19, on the road, Sept. 11.

Garrett Baumhover, Spencer Zinn and Tommy DeSollar, along with the Bobcats’ offensive line, provided the sparks that gave the Bobcats a 21-13 lead with under seven minutes to play in the fourth quarter. They were driving deep in Indianola territory when a screen pass by Baumhover was ruled a lateral, allowing Jacob Darr to scoop up the ball at the 12-yard line and go 88-yards for a touchdown that allowed the Indians to tie the game with a two-point conversion.

Quickly, the Bobcats’ defensive unit had to switch from cheerleaders to game savers as they kept the Indians out of the end zone to preserve the two-point lead.

“They are just getting better and better every half of football. It started with the way they played the second half against Hempstead and it carried over this week. Sure, they gave up a touchdown in the first quarter, but they didn’t give up another offensive touchdown the rest of the game,” said coach Justin Penner. “They scored on that goofy fumble, lateral call, but the biggest play maybe of the football game was our defense going out onto the field to play that two-point conversion. Them coming up with the stop on that play began the difference of the game. I’m impressed with our defensive effort and our kids and our coaches and how much better we’re getting on a regular basis.”

Indianola scored the first touchdown of the game, but Zinn found the end zone on a 34-yard run and Eric Monahan’s first extra point of the night tied the game at 7-7. The first half ended with the Bobcats trailing 10-7 after the Indians added a 34-yard field goal in the second quarter.

Baumhover’s 45-yard touchdown run on the Bobcats’ opening drive of the second half shifted the game back to Western Dubuque.

Just 2:11 later, DeSollar was crossing the goal line finishing off a 51-yard touchdown pass from Baumhover. Monahan’s third extra point of the night gave the Bobcats a 21-10 lead midway through the third quarter.

“We were really just trying to figure out who we were and now we’re finally figuring out who we and what it is this football team is capable of doing on the field,” said Penner.

“I think we’ve also raised the level of expectation of this team as they have proven that they can compete, but now we believe that we are a team who can execute on a high level on a regular basis and are a team that can win some football games.”

That’s exactly what the Bobcats did to get the win against the Indians. All facets of the game showed up and the coaching staff did their job, too, to secure the win under difficult situations.

The defense continues to be the rock of this team, but the tough, grind it out running game that this team will so desperately need to win later in the season showed up to help them run out the clock against Indianola. However, the Bobcats’ offense has been the star of the show, especially since seven of their 11 touchdowns have been on plays of 20 yards or more.

“There were times when we were driving the field but we weren’t very successful in the red zone, so that is something that we have to get better at. However, those explosive plays set us up to win this football game,” said Penner.

As we all continue to push through the COVID-19 pandemic and maintain a new sense of normalcy, parents and guardians of school-aged children are reminded that annual physicals and back-to-school immunizations are still very important.