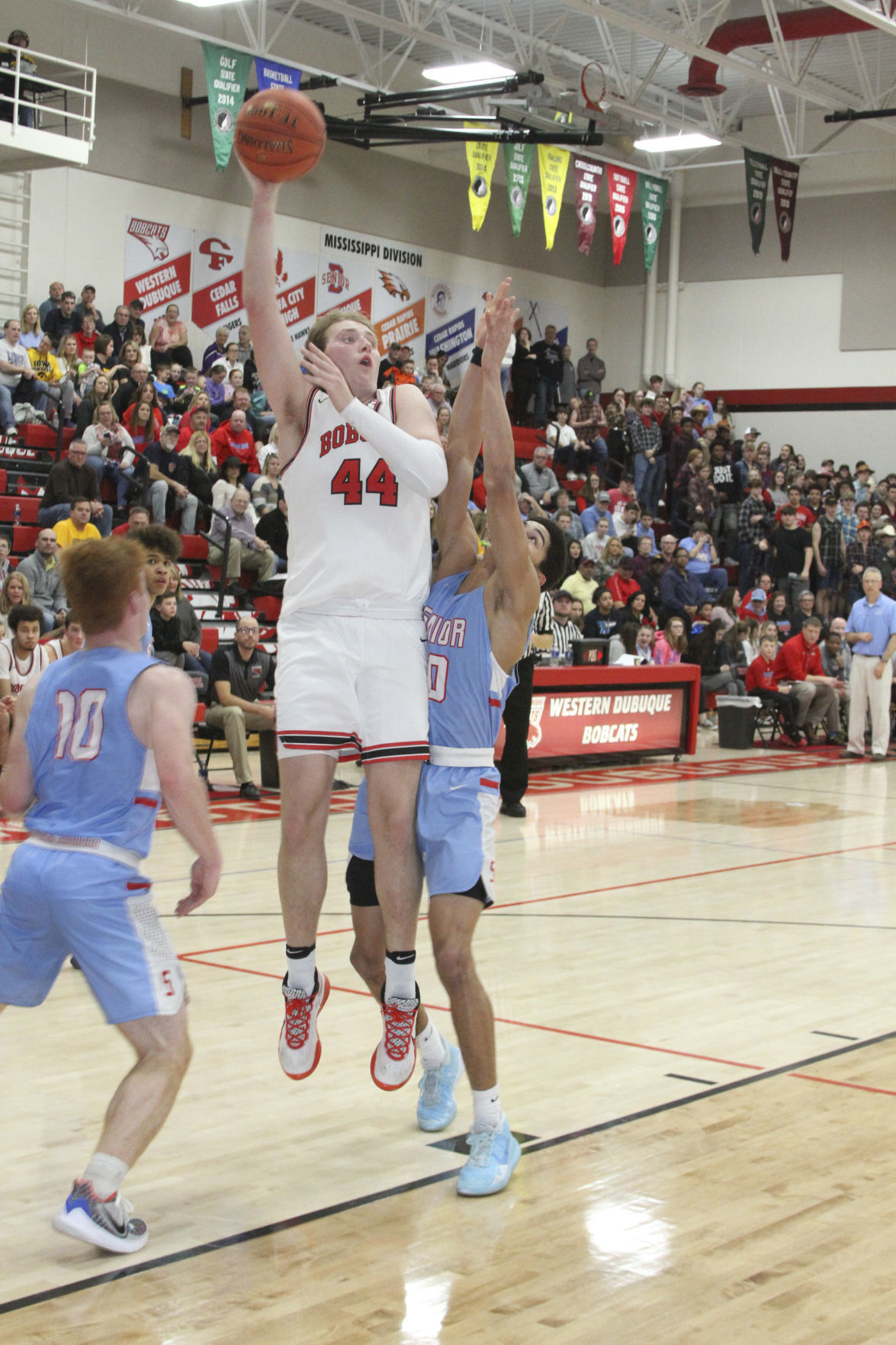 Dylan Johnson puts up a little hook shot for WD. 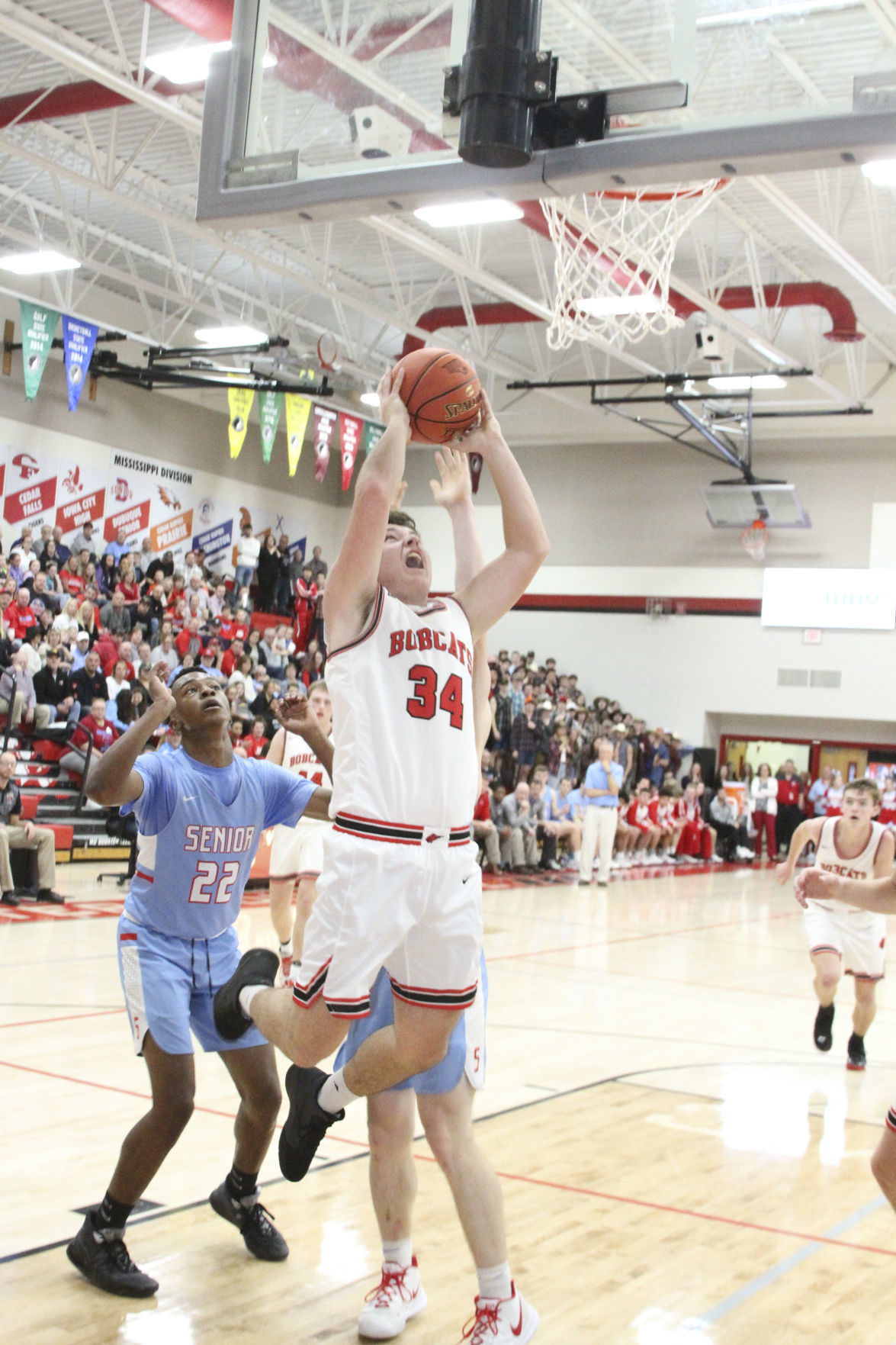 Payton Quagliano battles his way to the basket for Western

Dylan Johnson puts up a little hook shot for WD.

Payton Quagliano battles his way to the basket for Western

The Western Dubuque boys’ basketball team experienced two losses last week. The first loss was a 78-52 thumping on the road by Cedar Rapids Prairie, Jan. 21 and three nights later they failed to close the gap late in their 57-49 loss to Dubuque Senior at Epworth, Jan. 24.

Admittedly, it wasn’t the Bobcats’ best effort against Prairie. Defensively, they weren’t able to shut down the Hawks who made 34-of-53 shots from the field on their way to scoring 78 points, the highest point total the Bobcats have allowed all season.

On the offensive side of the ball, things didn’t look that bad as they made 16-of-34 field goals including 8-of-13 from three. They got to the free throw line 16 times and made 12. Three players scored in double figures. Dylan Johnson led the way with 15 points. Payton Quagliano had 12 and Garrett Baumhover 11, but they only scored 52 points as a team and that was nowhere near what they needed to win that game.

Against Dubuque Senior, the Bobcats put forth a much more physical effort and competed for 48 minutes but they struggled to take care of the basketball late in the game, hurting their chances of pulling off an upset win.

“The effort was there. We’re down two and the next thing you know we’re down seven going into halftime,” said Wayne Cusick, head coach of the Bobcats. “Overall, we didn’t shoot the ball very well in the first half, but in the second half we picked it up. Defensively, we did enough to give ourselves a chance to win. Score a few more points. Keep them off the free throw line. Who knows.”

The Bobcats didn’t get off to a great start against Senior, but it wasn’t a terrible one. They found themselves down 22-15 halftime but felt that the Rams were still in sight. The lead became 11 points as the Rams went into the final quarter up 35-24, but the Bobcats came out roaring as they went on a 10-3 run to quickly cut the lead down to four points, 38-34, with 5:36 left in the game.

The game became a possession by possession grind it out type of game with the Rams taking care of things on the free throw line, making 11-of-14 in the fourth quarter and they made the Bobcats pay every time they turned the ball over late in the game.

“We fouled the right guy every time, but they were just making their free throws,” said Ben Wilson, the Bobcats’ assistant coach. “Give them credit. They made shots when they had to.”

“It was pretty obvious that if we didn’t have Garrett out there handling the ball for us we would have been in big trouble. He’s maturing. He’s starting to figure the game out,” said Cusick about Baumhover who almost single-handedly took on the Rams’ full-court trapping zone defense all game long. “All the guys did good things tonight. These guys never give up. They are going to keep plugging away. They are going to continue to scrap. We just tell them to go out there and be the best versions of ourselves that we can be. We’ve been doing a great job of getting to the top and playing with these solid Mississippi Valley teams, but now we have to figure out how to go over the top. The kids are doing a great job.”

The always battling Bobcats now fall to 3-10 for the year and 2-7 in the Mississippi Valley Conference Mississippi Division.