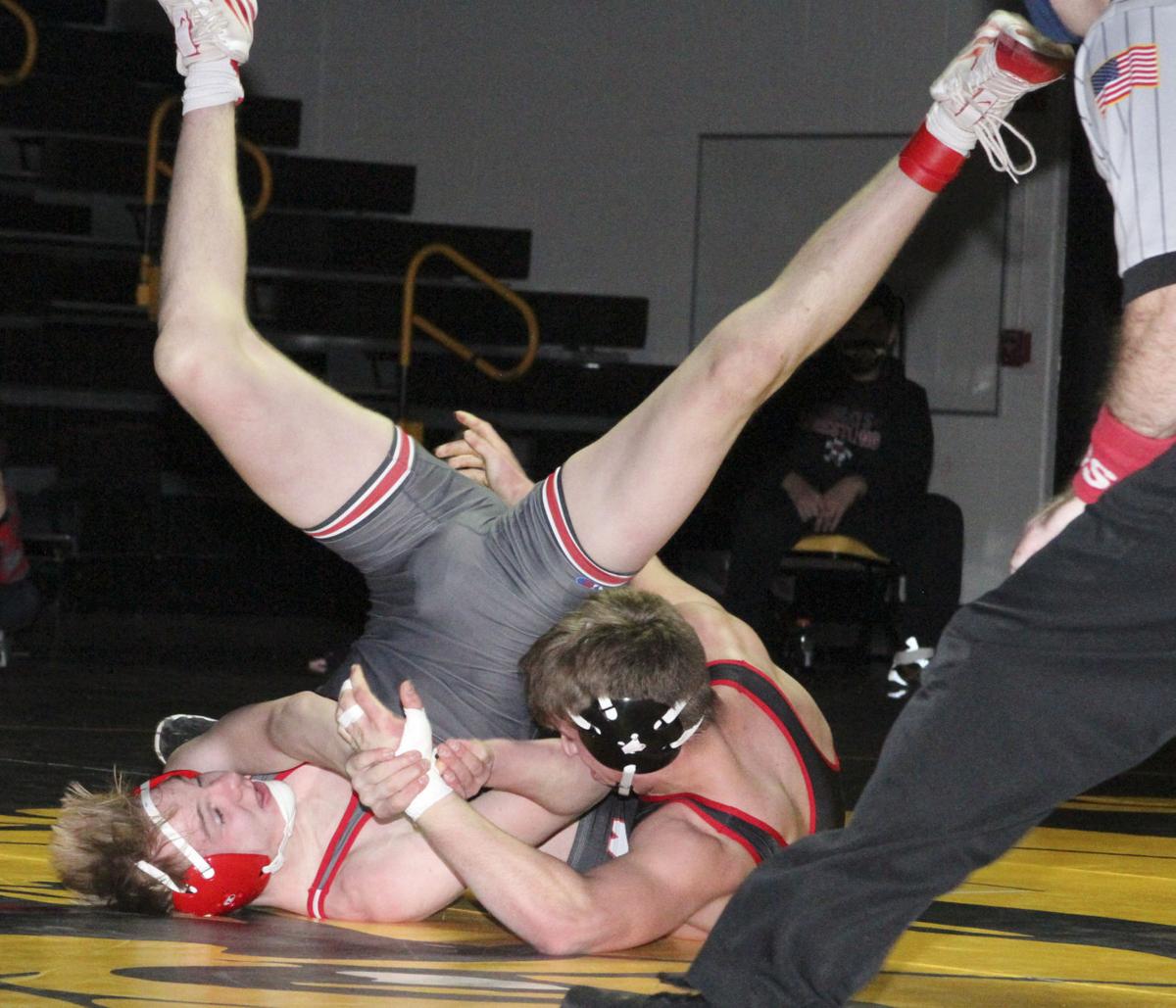 Evan Surface (182) locks up his opponent’s leg on his way to earning a pin to help Western Dubuque pull off a 34-32 upset win over Cedar Falls in the first round of the regional duals in Bettendorf, Feb. 10. 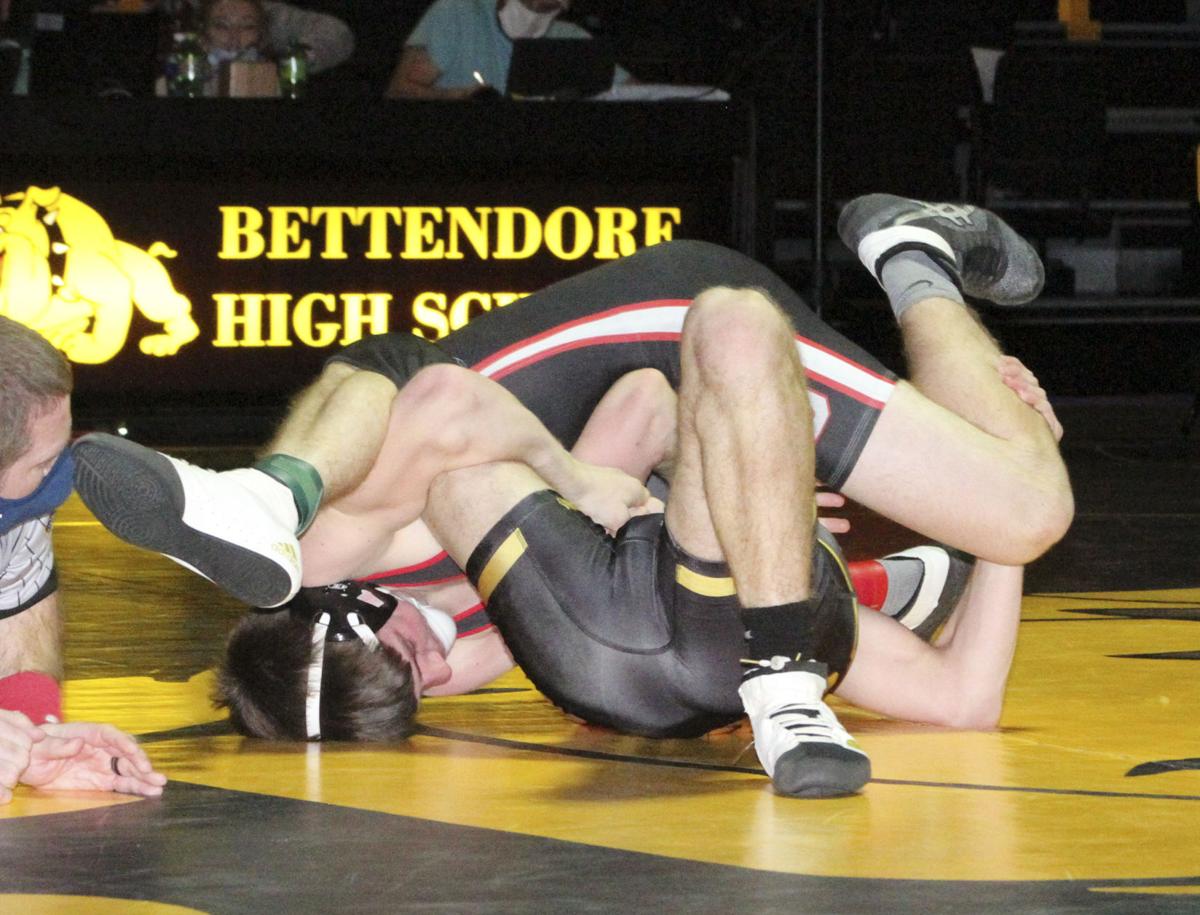 Nevin Pins (138) works hard to get his pin to give the Bobcats an early 6-0 lead, but Western Dubuque dropped the regional title match 62-10 to Bettendorf, Feb. 10.

Evan Surface (182) locks up his opponent’s leg on his way to earning a pin to help Western Dubuque pull off a 34-32 upset win over Cedar Falls in the first round of the regional duals in Bettendorf, Feb. 10.

Nevin Pins (138) works hard to get his pin to give the Bobcats an early 6-0 lead, but Western Dubuque dropped the regional title match 62-10 to Bettendorf, Feb. 10.

Evan Surface (182), Emerson Lux-Morales (285), Maddox Bries (106) and CJ Kammiller (126) all pinned their opponents to help lead the Western Dubuque wrestling team to a 34-32 upset win over Cedar Falls in the opening round of the Regional team dual in Bettendorf Feb. 10. The Bobcats fell short of the entire team earning their way to Des Moines as they were beaten by Bettendorf 62-10 in the final.

“We’re happy with the win over Cedar Falls, but quite honestly we didn’t wrestle as well as I think we can,” said coach Paul Cleary. “We won that match because those boys were just fighting for their team, their family. They spend a lot of time together. They believe together and they sweat together. You spend all that time together so you fight for your brothers until the end.”

Nathan Casey (132) wrestled his way to a 10-0 major decision in the opening bout between the Bobcats, the 15th ranked team in Class 3A, and Cedar Falls, 12th ranked. The win gave Western Dubuque an early 4-0 lead.

Cedar Falls reeled off three straight wins, but only one by pin, so the Tigers held a 13-4 lead going into the meat of the Bobcats’ order.

Down by four points, the Bobcats needed a technical decision to tie but could pull out the dual with a major decision or pin. That put the match all on the shoulders of CJ Kammiller who, as the match went along, clearly needed a pin to win. Down 10-2, Kammiller slowly started to turn the match. He closed to 10-7 to start the third period. He was on the bottom and worked his way to earn a restart with under 15 seconds left in the match. Kammiller moved quickly on the whistle and reversed, managed to get his opponent onto his back and with the slam of the referee’s hand became CJ “The Tiger Killer” Kammiller, the man who pinned Conner Doyle with seven seconds on the clock to give the Bobcats an exciting 34-32 victory.

“I love CJ Kammiller. He’s got great fight. He’s got great heart. He’s a Bobcat through and through. CJ is a pinner, so he’s always got a shot,” said Cleary. “The longer the match goes for us, the better chance we have of one of our guys outworking the other guy. We try to be in better shape than everyone. That showed in that match for sure for CJ. Our conditioning won that match and his heart.”

With the win, the Bobcats moved on to battle the Bulldogs, the fifth-ranked team in Class 3A.

Three matches later and Bettendorf had turned the match, 18-6.

Surface (182) was then involved in a tight bout that went into overtime before Damian Petersen was awarded a 5-4 win. Bettendorf went on to run the table for the 62-10 win.

“We were hoping to get three, maybe four matches out of that dual with Bettendorf, but they are good. They are better than us, but it is what it is,” said Cleary. “This helped us get more mat time and that helped these guys get ready for districts.”