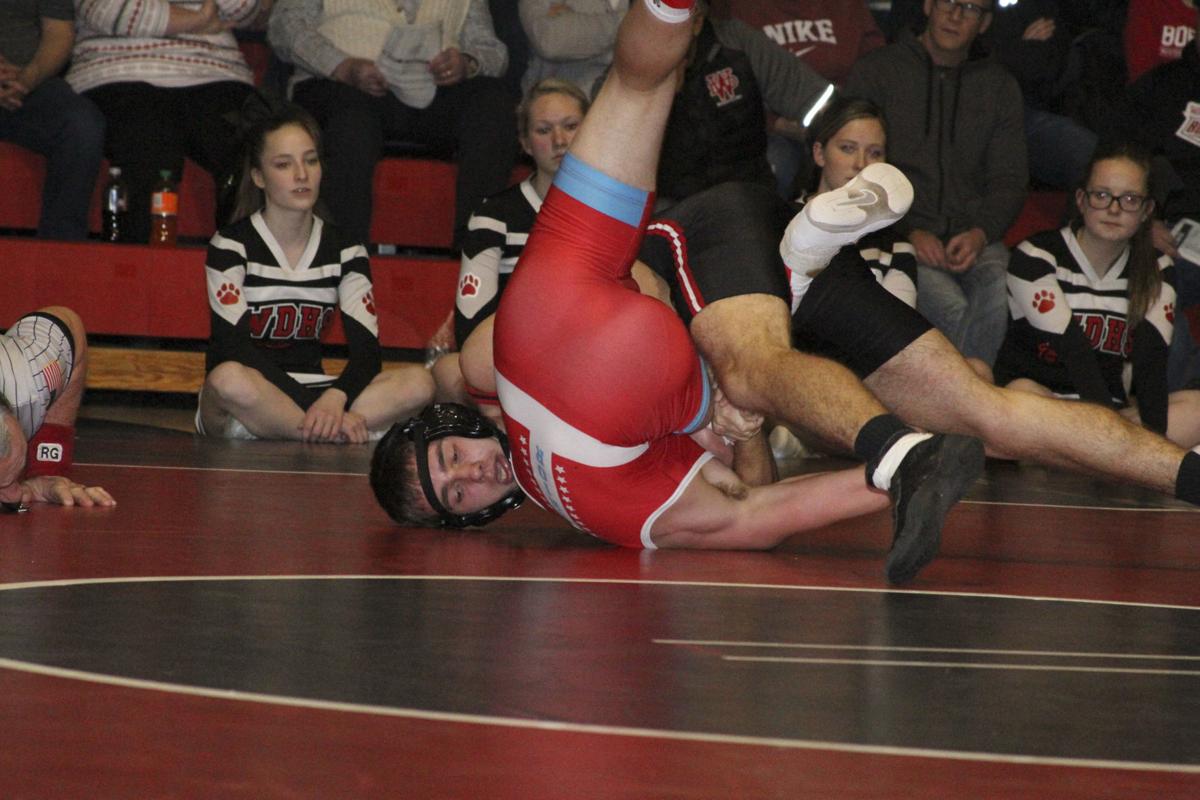 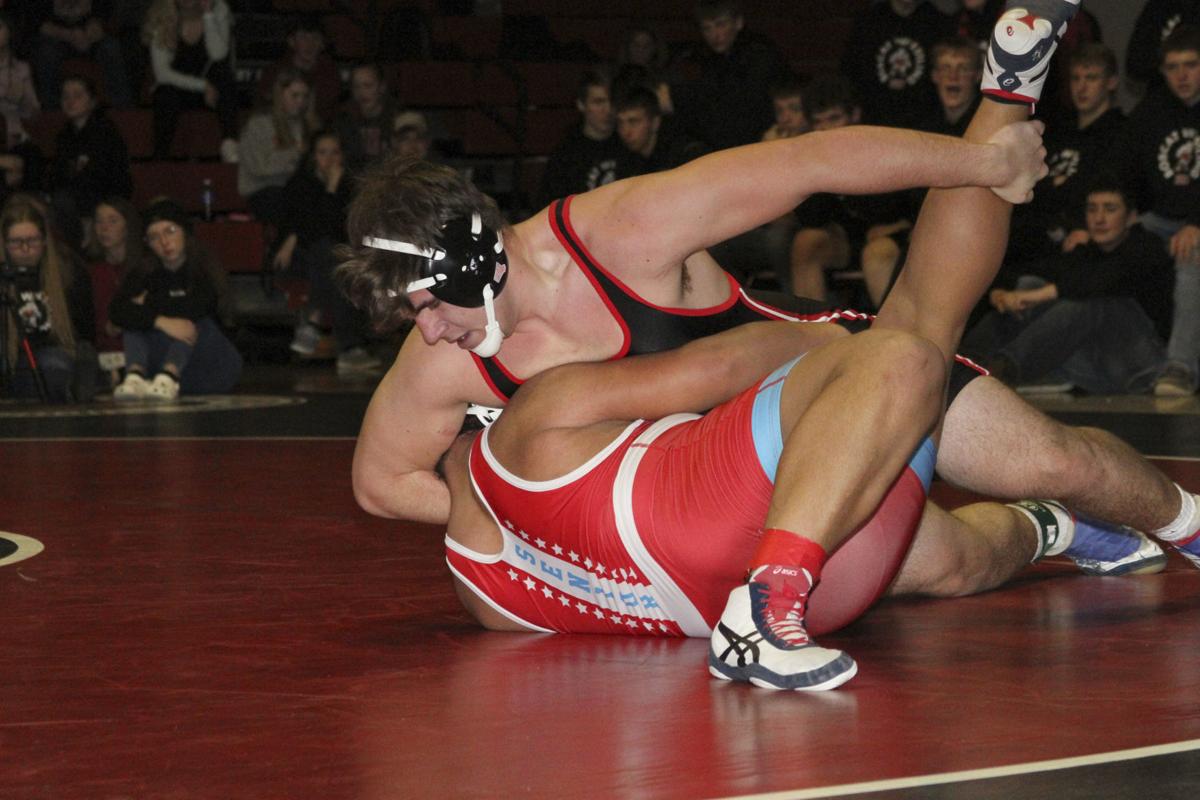 Joe Loffa (220) keeps the pressure on his opponent from Dubuque Senior. 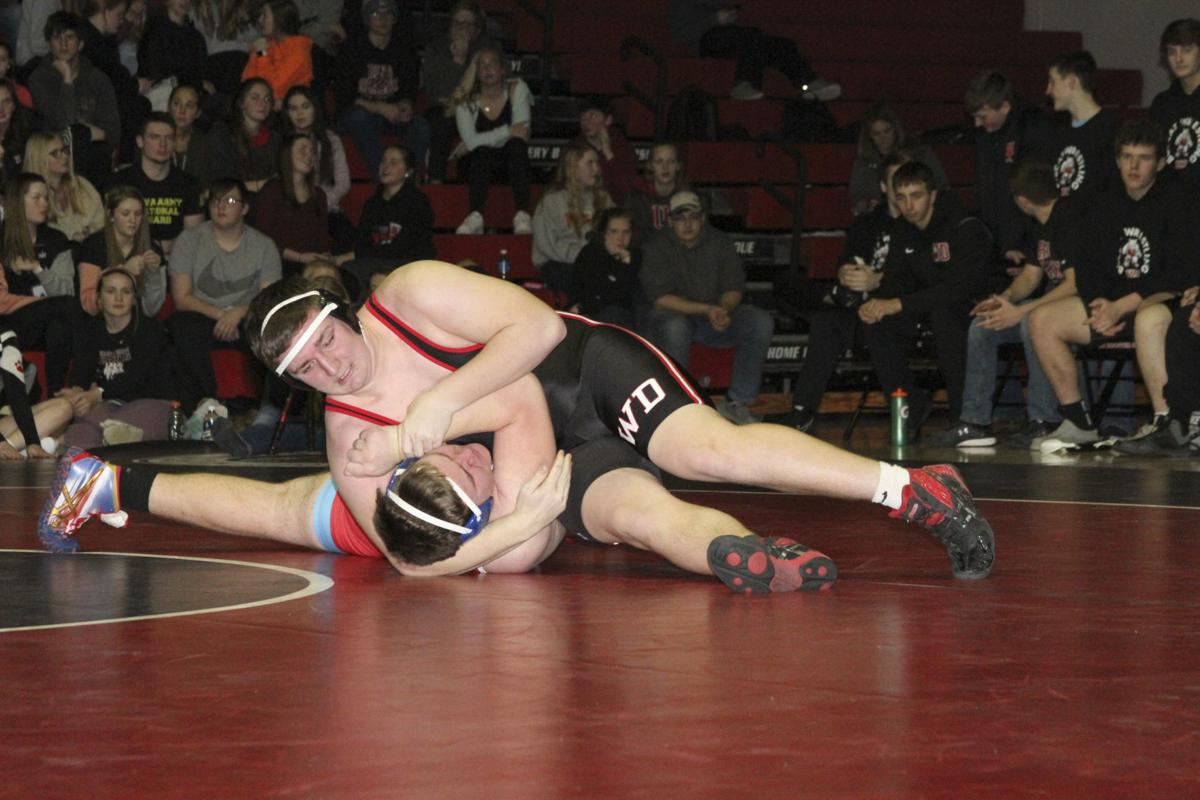 Joe Loffa (220) keeps the pressure on his opponent from Dubuque Senior.

Western Dubuque’s wrestling team won 12 of 14 weight classes as the Bobcats blasted their way to a 59-6 win over Dubuque Senior in the Mississippi Valley Conference dual meet held at Epworth, Jan. 16.

The Bobcats wasted very little time in taking control of their match with the Rams as Tanner Gaul (113) needed just 14 seconds to pin Tyler Smith and claimed the fastest pin of the night in the very first battle on the mat.

Ben Schueller (120) went just a little deeper into his match, but not much more as he had his hand raised for pinning Hannah Reel in 1:12 as the Bobcats raced out to a 12-0 lead.

“The guys have been working hard. It felt good to wrestle a local team. We like to compete against each other. It was a fun night,” said Paul Cleary, head coach of the Bobcats. “It was a great crowd that showed up. We have great fans and this is a great community. We are lucky to have their support.”

Corbin Collins-Patzner (126) and Frankie Cretsinger treated the crowd to an exciting match, but Cretsinger pulled out a 12-8 win to stop the Bobcats run.

Joseph Simon started another mini-run by the Bobcats as he won by forfeit and Jared Cordes (138) wrestled a very smart match to walk away with a 5-2 decision over Carter Elliott.

After WD’s Trent Busch (145) suffered a tough loss to his cousin Luke Busch, pinned with just 19 seconds left on the clock while being up 14-4 on the scoreboard.

Levi Burds (152) pinned Beau Healey in 1:33 to start a Bobcat sweep of the remaining eight bouts of the meet.

Tony Lyon (160) fought a very smart match and was rewarded with a 3-1 win over Simon Benson.

Sawyer Nauman (195) walked up to the mat with the theme music to the original Batman blaring as he returned to action with a new mask after breaking his nose during the holiday break.

“I definitely wanted to get back out there. It’s a little tough with that mask, but wrestling is wrestling,” said Nauman, a junior who is also taking part in his first year of wrestling since the fourth grade. “Coach Cleary tells us that we train harder than any team in the whole state. I look to wear down my opponent. The first period is always a big one for me. If I’m still wrestling in the third period, I know I’m going to win that match. I was a little bit more tired than I’d like to have been after my match, but that mask makes it a lot harder to breathe. I’ll get used to it. I’ll be fine.”

“Attitude and effort is everything. They wanted to go out there and get paid. Paydays are meet days and they were hungry and ready,” said Cleary. “Top to bottom, they all wrestled well tonight, so it was a good night for Bobcat wrestling. These men just need to keep doing what they are doing; work hard, have fun and keep moving forward.”