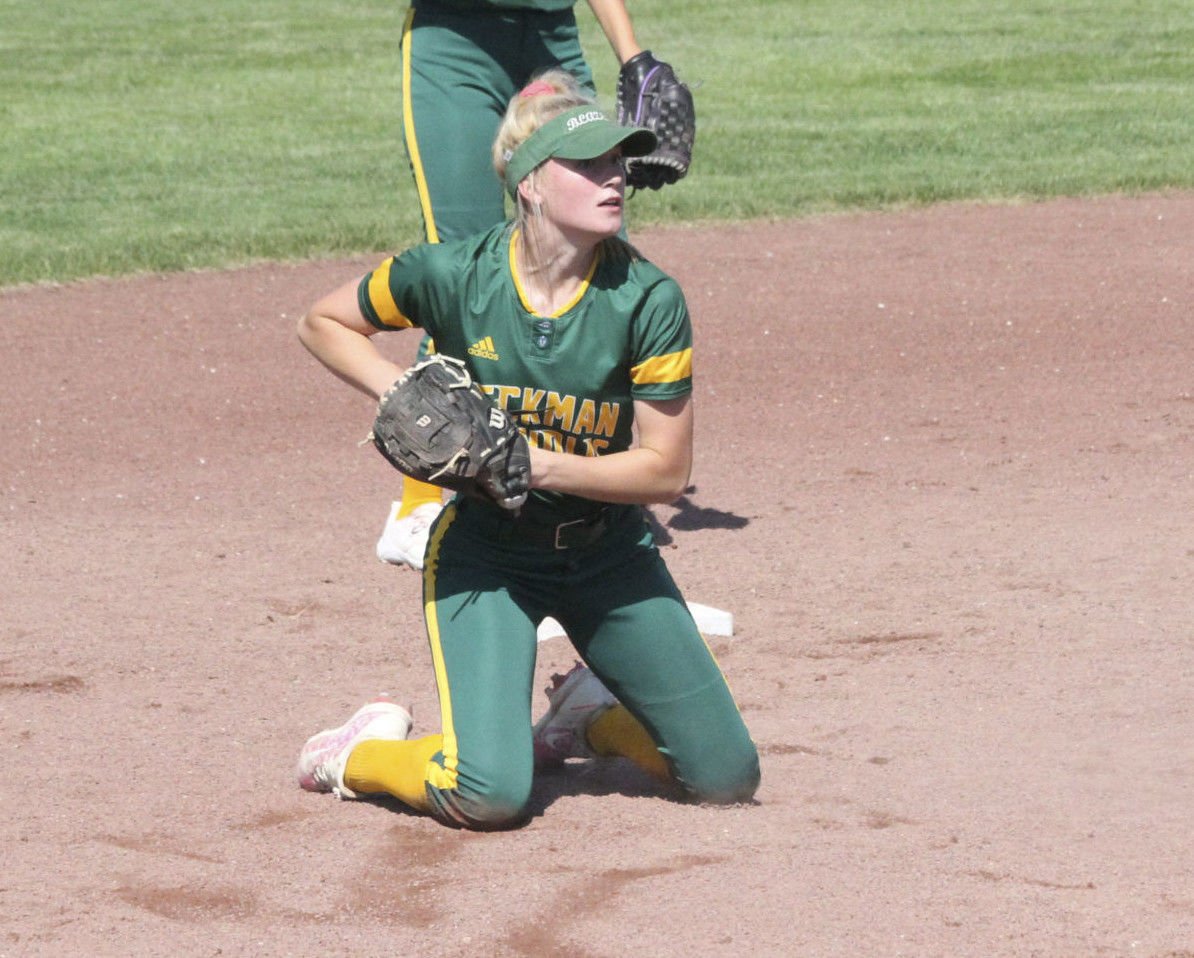 Heather Boeckenstedt looks to make a play after keeping the ball in the infield during the state tournament. 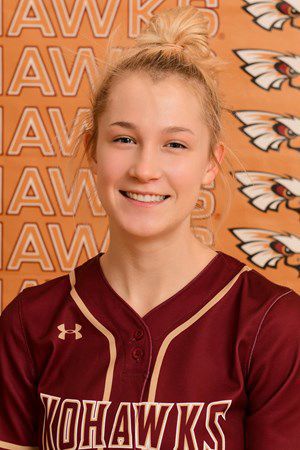 Nobody was the least bit surprised that 2019 Beckman Catholic graduate Heather Boeckenstedt was in the starting lineup when Coe College opened its softball season in Leesburg, Fla., March 12. It was the expectation from the time Boeckenstedt committed to the Kohawks.

What wasn’t expected was that Boeckenstedt’s first collegiate season would end the same day.

After playing a key role in Beckman’s run to the IGHSAU State Tournament last summer, a big freshman season at Coe was in the cards for Boeckenstedt.

Coe dropped an 11-0 decision to Manhattanville College in the season opener, and then bounced back with an 11-0 win over Meredith College. Boeckenstedt started at shortstop in both games, and did what she did so well at Beckman, going 1-for-2 at the plate and scoring three times.

Boeckenstedt recalled a hectic few days when the season went from promising to over.

“We left for Florida from the Cedar Rapids Airport, March 11. Once we got to Florida we ate, got groceries and had a short practice,” she said. “After practice we found out Coe had extended spring break an extra week and everything just snowballed from there.”

“We played two games the next day, and following the games, we found out Coe’s baseball season was canceled along with the DIII Wrestling Championships. At that point we were just waiting for the news, and around 11 p.m. that night our coaches let us know the season was likely over and we returned to Cedar Rapids March 14.”

As disappointing as the cancellation of the season has been, Boeckenstedt has been able to stay positive in light of things.

“As devastating as it was to hear the season my teammates and I worked and prepared so hard for was over, it put a lot of things in perspective for me,” she said. “There are so many people that don’t get an opportunity to play sports, and I have been blessed enough to play in college. Never will I take things for granted again.

“I’d give anything to drag myself half-awake across campus to an early class again. I never realized how blessed I am to be able to attend college and sit in those classes. Some people never get that opportunity.”

Boeckenstedt loves what Coe offers athletically and academically, but it was not an easy decision to become a Kohawk.

“When May rolled around and it was time to make a final decision, I started thinking more about Coe, and realized Coe could give me everything I wanted and needed in a school. I can compete athletically while pursuing a major in nursing without feeling the need to pick between the two.”

Like the establishment in the classic TV series “Cheers”, Coe is a place where everybody knows your name.

“I go to class every morning and receive an amazing education from professors that know me and care about how I am doing in and outside of the classroom,” said Boeckenstedt. “Then I go to practice, lifting, or hitting groups with my amazing teammates and coaches, and still have some time to hang with friends, have a job, watch other sports or do what I want. Not every school can offer that. Coe does all that and more.”

“Every time any team leaves for a game, Dougie waits outside for the bus departure. When the bus starts moving, Dougie jumps around and waves frantically,” Boeckenstedt said. “It brings a smile to everyone’s face, but most importantly it shows how much he cares about our athletic teams. There are so many people in the Coe community that care so much about the school and every student athlete. Dougie is just one example of that.”

Boeckenstedt was a four-time state track and field champion, winning the Class 2A 100-meter hurdles in 2018 and 2019 and anchoring Beckman’s winning shuttle hurdle relay team both years. After an all-state career on the volleyball court, there is little doubt Boeckenstedt would have been an impact player at the net as well. The decision to play softball was not an easy one.

“I probably think about track every day. There is nothing I miss more than running at Drake Stadium,” she said. “I have considered competing during the indoor season since it is before softball games start. However, that wouldn’t be fair to my softball teammates, nor would it help me be prepared for softball games. I’ve had to come to terms with the idea that my track career is more than likely over.”

At this point, Boeckenstedt plans on being back on campus for the fall semester after a spring term filled with online instruction.

“There has not been any talk of Coe not going back to normal education this fall. I’m a nursing major, so my classes were difficult to transfer online,” she said. “I had two labs this semester that ultimately were canceled, but the teachers in my other four classes have handled everything well in transitioning to online education. Still, nothing beats going to class in person every day.”

While the Kohawks saw a premature end to the 2020 season, the team has managed to stay in touch using technology and is looking forward to resuming play in the fall.

“Our coaches do an amazing job keeping us all connected and focused on getting better. We have weekly Zoom meetings and weekly challenges that keep us interacting with the team, our families and the community,” Boeckenstedt said. “One of our long-term challenges is the penny-in-a-jar challenge. Each day we are active or have a productive day, a penny goes in the jar. Once we return in the fall we’ll count the pennies and make a donation to a charity.”

The Kohawks will have a year’s maturity under their belts next season, and Boeckenstedt will be one of the team’s leaders. Look for Coe to be a player in the American Rivers Conference race.

“I’ve been asked by Coach Meyer to be a leader in the infield since most of our group consists of freshmen,” she said. “My role at Coe is to not only to compete at a high level and help the team win, but to be a leader and help my teammates achieve as well.

“Our entire team is returning next season, so we’ll have the same opportunities in front of us again.”