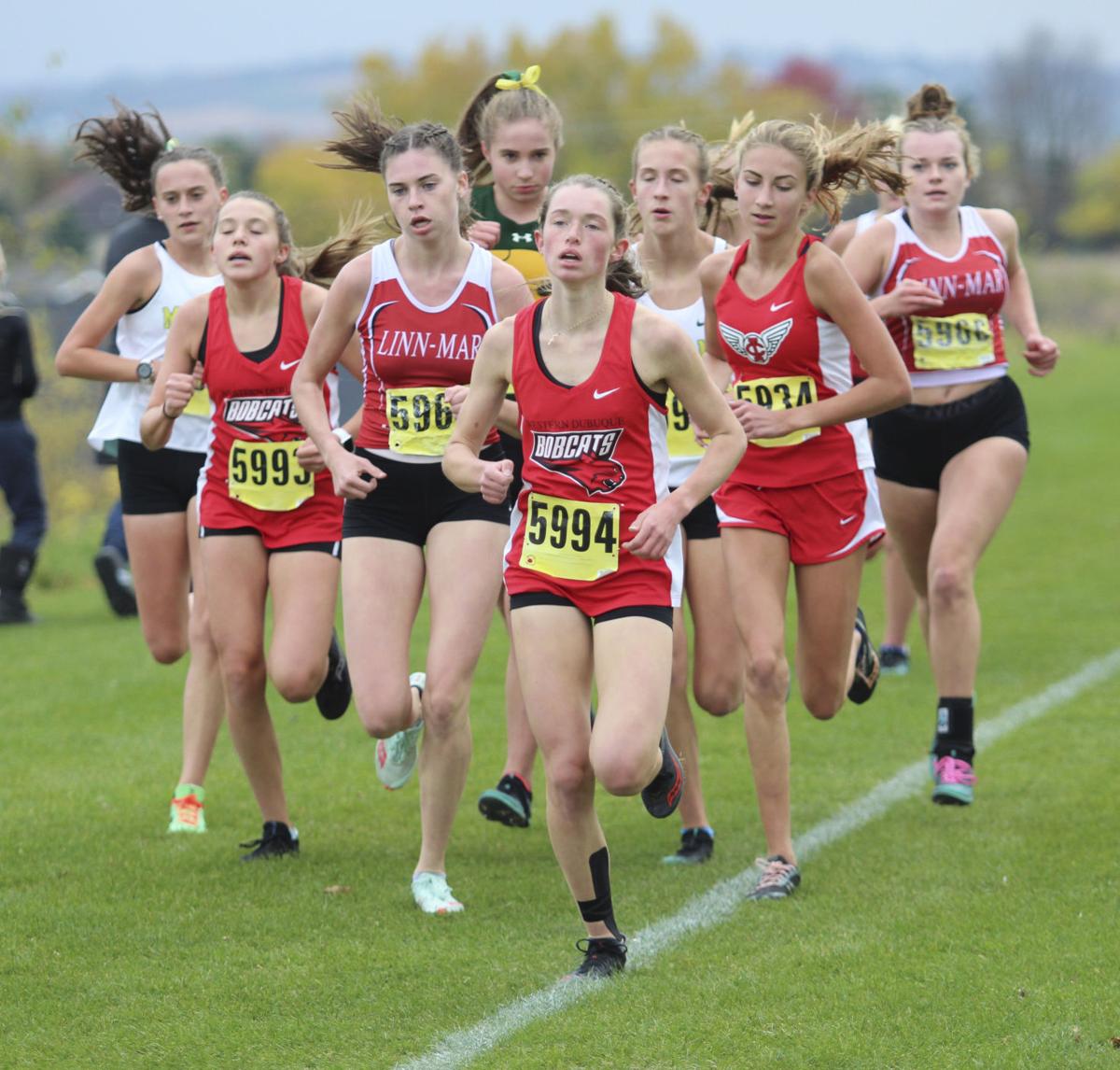 Alyssa and Lauren Klein run towards the front of competition in route to their state-qualifying finishes. 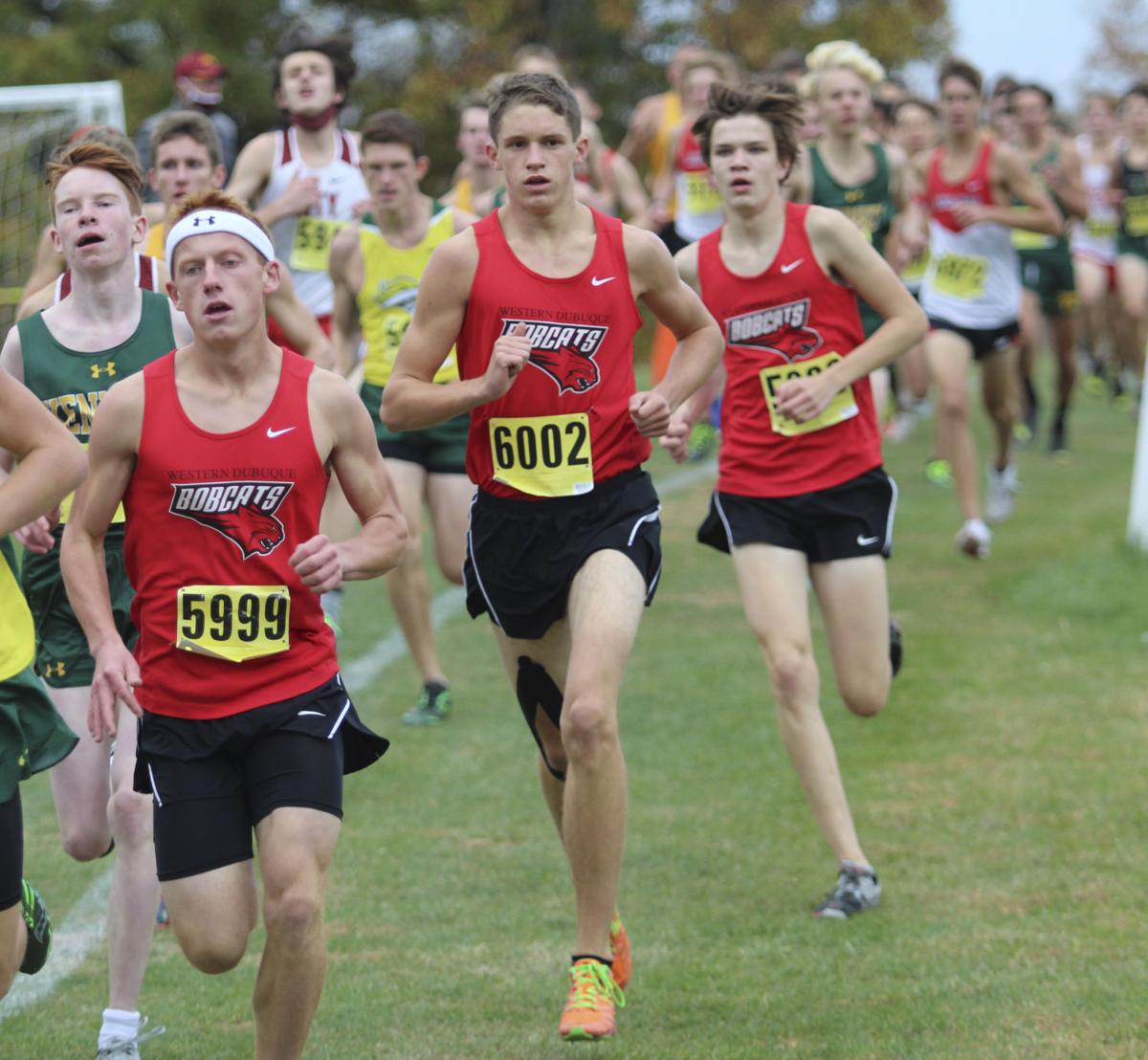 Cade Messer, Eli Naumann and Isaiah Hammerand run together. Both Messer and Naumann advanced to state.

Alyssa and Lauren Klein run towards the front of competition in route to their state-qualifying finishes.

Cade Messer, Eli Naumann and Isaiah Hammerand run together. Both Messer and Naumann advanced to state.

Western Dubuque had a solid showing at the Class 4A State-Qualifying Meet at the Dubuque Soccer Complex, Oct. 21. For the girls, Lauren Klein and Alyssa Klein earned state berths, while Eli Naumann and Cade Messer qualified for the boys.

“They certainly picked the right night to run the way they did. Cade only ran a PR by three seconds and became the first three-time state individual qualifier in school history on the boys’ side. Lauren broke Laura Snyder’s 2015 5K school record by a second, running a 13 second PR to do it. Alyssa ran a 20 second PR to qualify. Eli came out of nowhere — we had him pegged in the 17-20 range and he ran a PR by 34 seconds to finish sixth. We thought he had an outside shot, but he ran extremely well and really went after it,” coach Mark Digmann said.

“We knew the district was going to be tough. The things we talked about needing to happen to qualify came up just short. We needed Lauren and Alyssa ahead of Hempstead’s No 3. We needed three qualifiers and Elly was 19. We needed all of them in the top 20 and we had Audrey and Lilly in 25 and 26. So we were close. That said. I don’t know how much better we could have run,” Digmann said. “Lauren (13 seconds), Alyssa (20 seconds), and Leah (37 seconds) all ran PRs. The other four ran within 25 seconds of their PRs and two of them ran season best times. Our team average was 19:41, beating last year’s group for the fastest average in school history. Last year, Elly ran 20:56 as our No. 4, Leah was our No. 6 in 20:55. Last year, our No. 5 counter ran 22:15 and this year our No. 5 ran 20:11. We may not have gotten in as a team, but it wasn’t because we weren’t good enough or because of the effort they put forth. I am extremely proud of all of them.”

“I am proud of them for what they did this year,” Digmann said of the boys’ finish. “We have a ton of talent to build on. Six of the seven ran career PRs and the one that didn’t, was within five seconds. We were only a point behind Cedar Rapids Kennedy, who was ranked in the contender’s list. Of the kids we ran at the district meet, we only lose Cade and Jacob. We have Eli back next year and Derek, Drew, Levi, and Isaiah are all back for two more. We have a bright future with this group, and I was proud of the way they competed.”