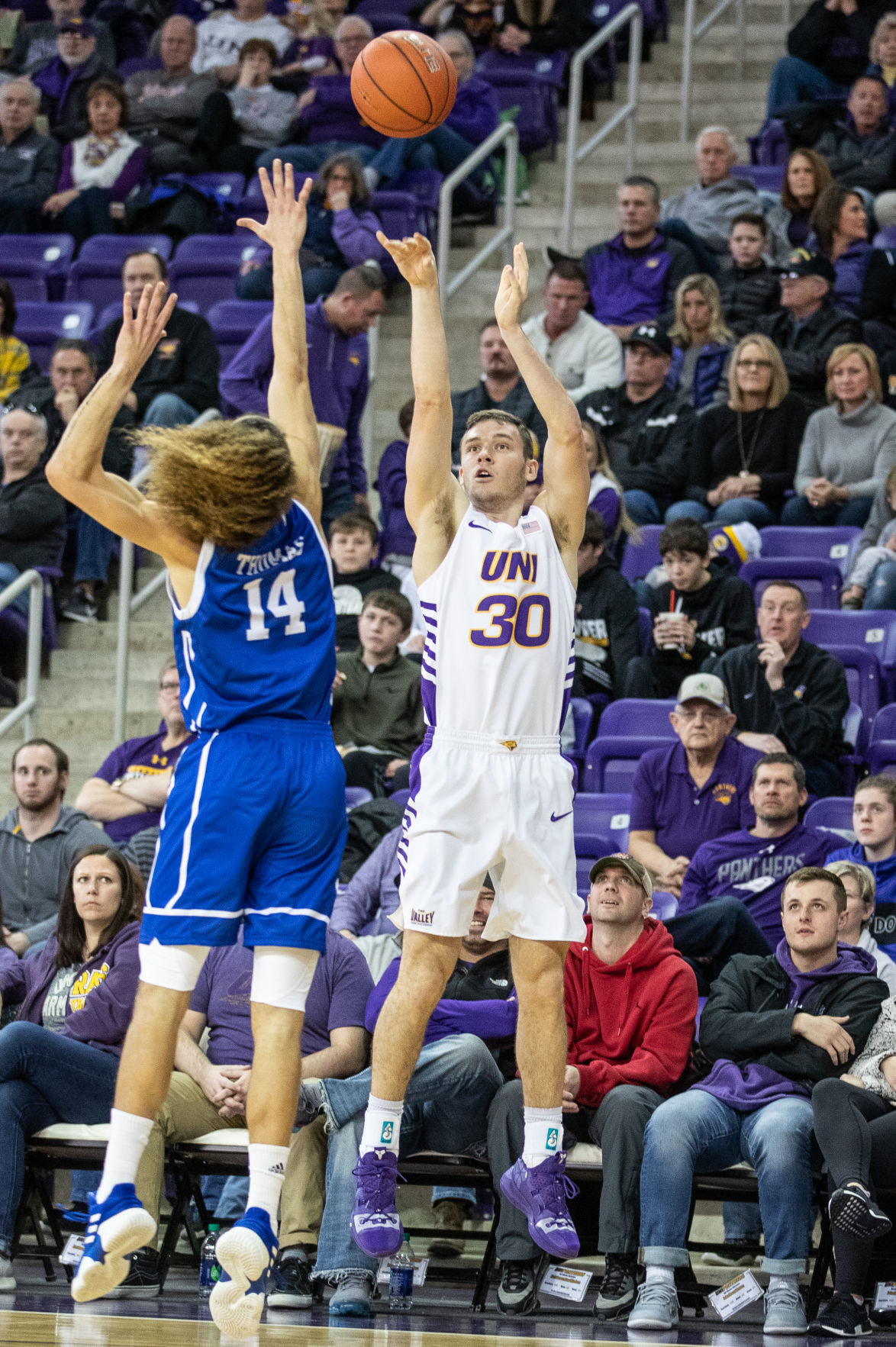 Spencer Haldeman shoots over a defender. 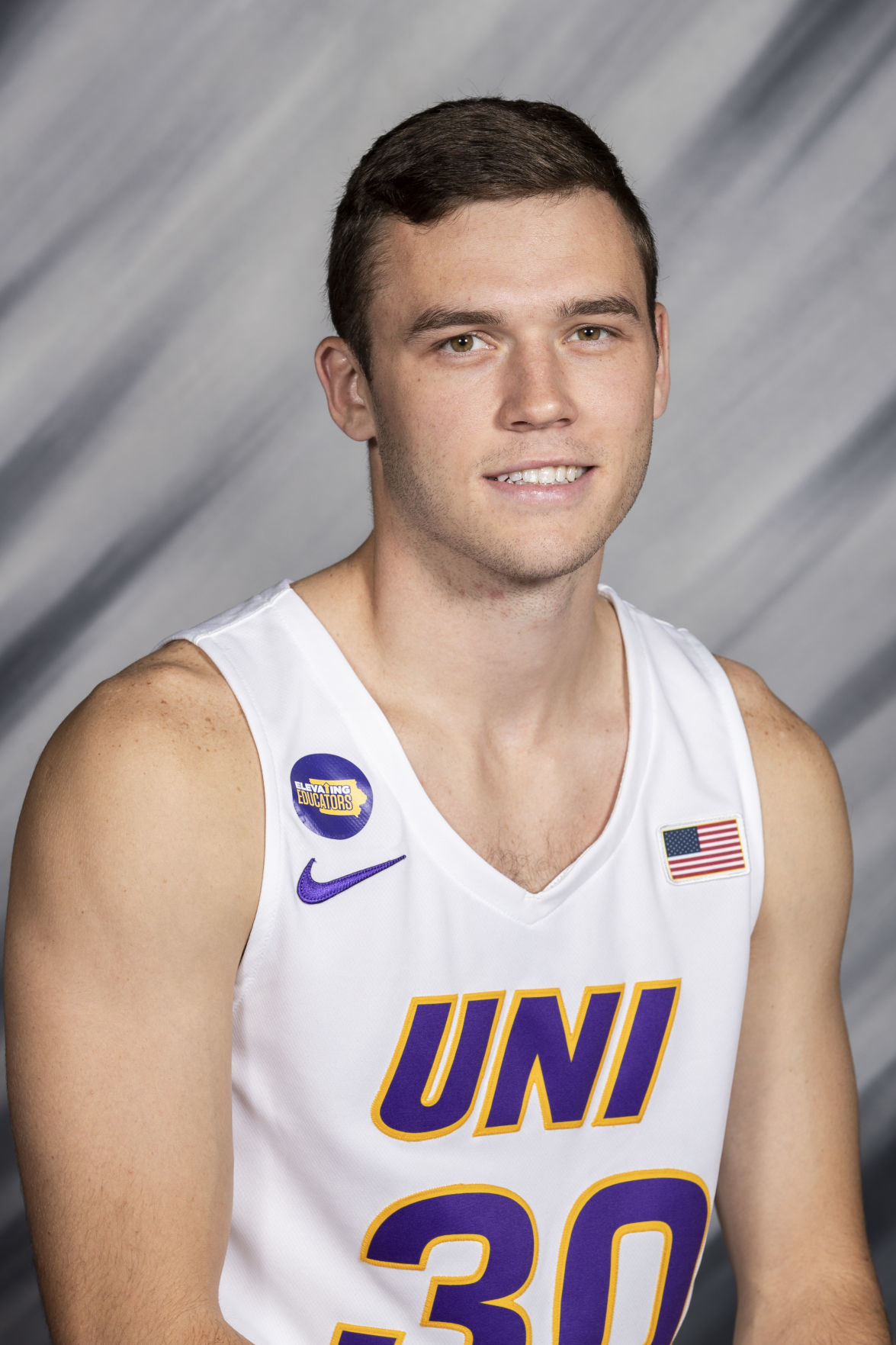 Under normal circumstances, thousands of college students would have walked across “the stage” recently to get their diploma as a graduate of the University of Northern Iowa.

One of those graduates would have been Spencer Haldeman, a student-athlete from Western Dubuque High School.

Haldeman, a member of the men’s basketball team, ended up taking five years to complete his journey in Cedar Falls as he took advantage of a redshirt year to better prepare himself for the pace and physicality of playing basketball at the college level.

“It was an interesting conversation that I had with Coach (Ben Jacobson) about whether I was going to be redshirted or not. He made it sound like I was in the team’s plans, but it was a toss-up on if I would get playing time or not. Since I felt that I was a little scrawny, I decided to take that year to work on my game, to get stronger and get used to college life,” said Haldeman. “I realized rather quickly that I had work to do. I knew that before I got to campus. I always had considered that I was pretty strong in the work ethic category, but I had to learn how to do it at a different level. Luckily for me and the other freshmen, we had seniors like Matt Bohannon and Wes Washpun there to show us what it takes to make that next step.”

Even though Haldeman didn’t travel with the team during the regular season, he spent a lot of time around the team and was allowed to practice with them. That’s where he went to school on learning what it took to play at the highest level of college sports.

That season turned out to be an extremely special one for the Panthers as they won the Missouri Valley Conference Tournament on Washpun’s buzzer-beating jumper to defeat Evansville 56-54, earning an automatic bid into the NCAA Tournament. The Panthers entered March Madness winners of 12 of their last 13 games and continued their hot streak in their opening round match by clipping Texas 75-72 on Paul Jesperson’s heroic three-point bomb at the buzzer.

Trying to keep their dream alive in round two, the Panthers had Texas A & M on the ropes but couldn’t finish them off as it was the Aggies who survived to go on to the Sweet 16 after a 92-88 double-overtime win.

Even though Haldeman wasn’t in uniform for that magical end of the season run, it’s the time that he looks back on as his best memories while at UNI. It’s also from that experience, being on the sidelines for all those special moments, that got him excited about getting on the court next year. He also believes that trip to the tournament sparked a shift in the culture of the UNI basketball program.

During the offseason, Haldeman continued to work hard so he’d be ready for camp and earn playing time. He did well enough to play in all 30 games that season and even started in eight of them.

“My goal was to be consistent,” said Haldeman. “I took pride in the fact that no matter if I was starting or coming off the bench, I wanted to play hard and play to the best of my abilities every game to give the coaches what they expected from me.”

During that redshirt freshman campaign, Haldeman knocked down 49 three-pointers on his way to totaling 228 points for the season, an average of 7.6 points per game. He was also named to the MVC All-Freshmen Team.

Haldeman continued to develop in his sophomore season as his role on the team became clearer. He played in 31 games that season with all of his minutes coming off the bench as he was the Panthers’ sixth man. He made a team-high 43 threes that year and scored 189 points, 6.1 ppg.

As a junior, Haldeman again came off the bench to play in all 34 games and scored 255 points, 7.5 ppg. He made 51 three-pointers on the year and scored a season-high 24 points in front of the