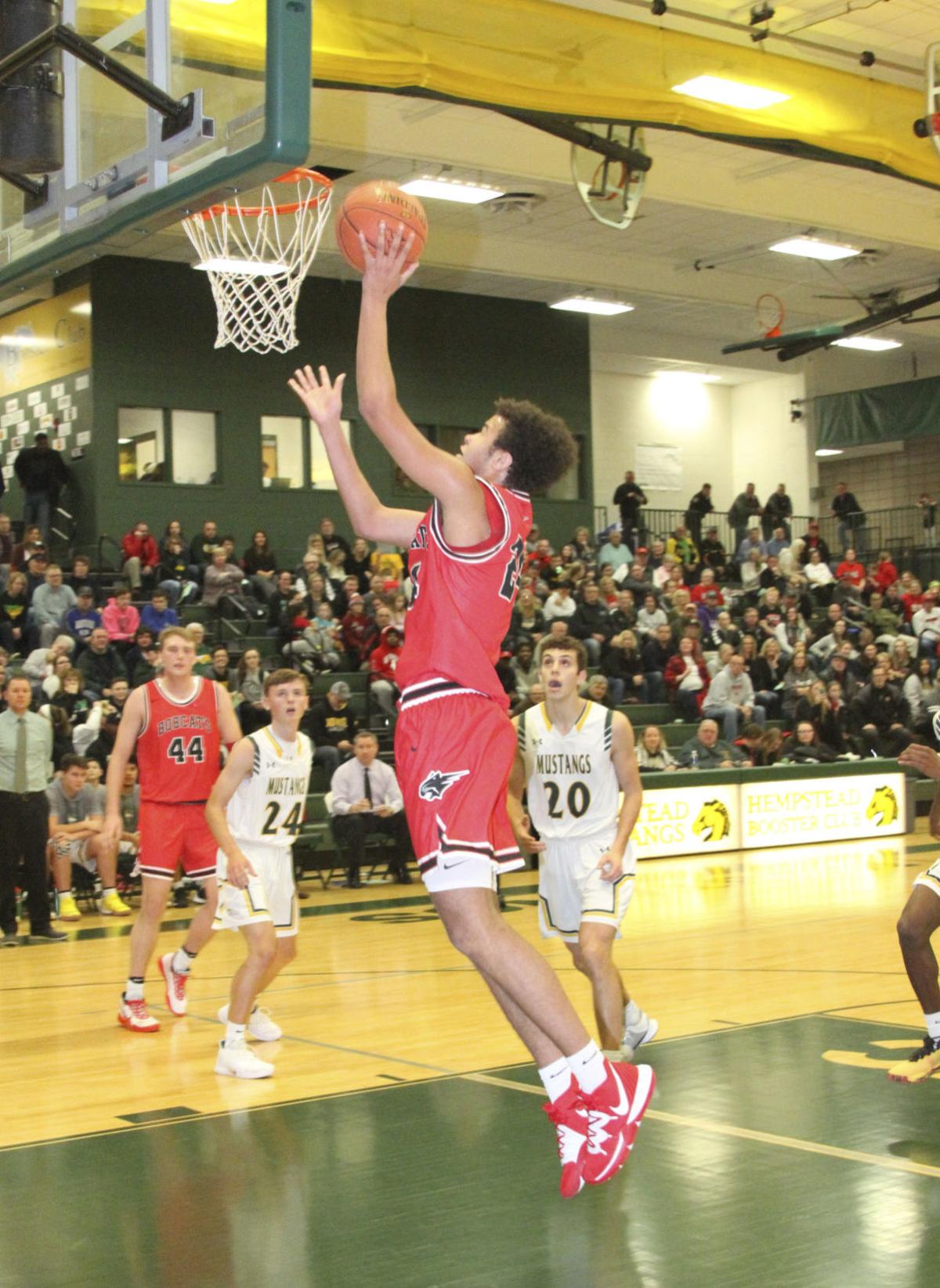 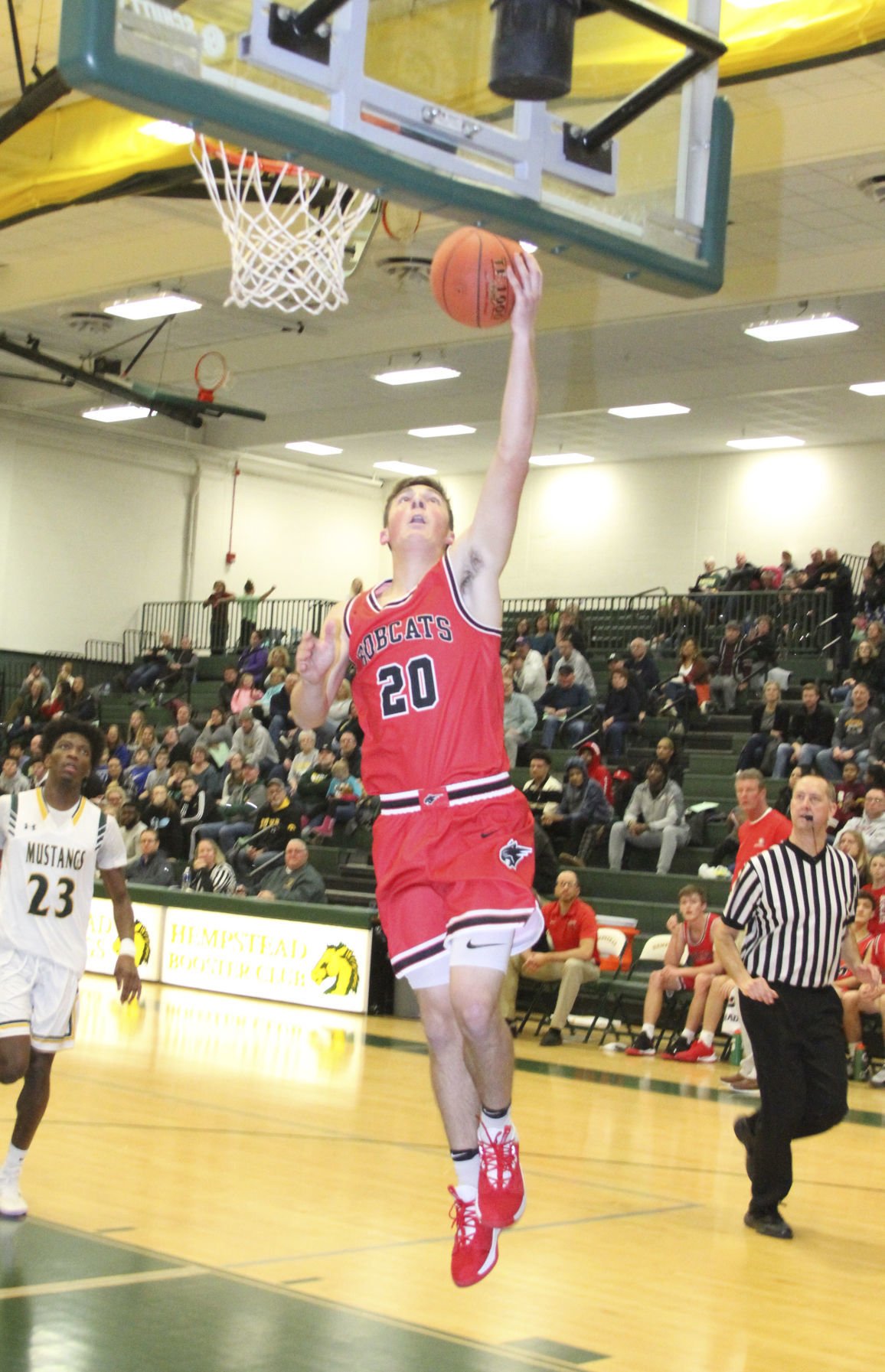 Thomas DeSollar converts a steal into a basket against Hempstead.

Thomas DeSollar converts a steal into a basket against Hempstead.

Members of the Mississippi Valley Conference continue to prove to the Western Dubuque boys’ basketball team that they still have a lot to learn if they want to pull out wins in this talented and athletic conference. The latest team to remind the Bobcats how tough the MVC can be is Hempstead who scored 17 unanswered points over six minutes to hand Western Dubuque a 66-54 loss in Dubuque, Dec. 13.

These two teams provided a very entertaining first half of basketball for the crowd that made their way to Moody Gymnasium. Back-to-back threes by Jamari Smith and Michael Duax gave the Mustangs an early 8-3 lead, but a basket by Dylan Johnson, two free throws by Mitchell Williams, a lay-up by Bryce Ploessl and two more free throws gave the Bobcats an 11-8 advantage with over three minutes left in the first quarter.

Hempstead went on a 10-2 run fueled by three-pointers from Nicholas Kaesbauer and Duax, but Michael Kraft’s jumper at the buzzer helped the Bobcats stay close, 18-15, at the end of the first quarter. Ben Bryant played a big role in that bucket as he battled for an offensive rebound under the basket and managed to poke the ball out to Kraft who was all alone just inside the free throw line for the easy two.

There was more back and forth play in the second quarter. Johnson’s three from the corner started the scoring and tied the game at 18-18. A basket in the paint by Johnson tied the game for the fourth time in the first half and his two free throws with 3:20 remaining in the half gave the Bobcats their second lead of the game.

That lead didn’t last long as Hempstead picked Garrett Baumhover’s pocket on back-to-back possessions to retake the lead and went into halftime up by four, 30-26.

The Mustangs quickly stretched the lead to seven, 33-26, on another three-pointer by Kaesbauer, but a fired up group of Bobcats went on a quick 13-3 run fueled by Johnson’s 10 points to give the Bobcats their third and final lead of the game. This is where Hempstead showed the type of physical defense you need to play in the MVC to constantly win games.

The Mustangs held a 47-42 advantage going into the final quarter after closing the third on an 8-0 run. Duax and Smith just kept on coming and combined to score the first nine points of the fourth quarter to all but close out the game.

“This is a tough loss,” said Wayne Cusick, the Bobcats’ head coach. “We came in here expecting and playing to win. Now we’re going to go back to practice. We’re going to work hard on the fundamentals and believe in the process that we started and work to get better every game.”

Even though they were outscored by Hempstead 30-15 with over five minutes to play in the third quarter, the Bobcats took a lot of positives from this game.

“We got some great minutes out of Mitchell Williams. He did an unbelievable job coming in and filling a role. I thought Dylan stepped up. I thought Garrett did a lot of good things even though he didn’t score as much as he can. Bryce Ploessl has been at practice for a week and he gave us everything he had. Ben Bryant came off the bench busting his tail trying to do things. Tommy DeSollar, same thing. Once those three guys from football get into basketball shape and understand what we’re trying to do, then we can do what we want to do. Right now we’re limited on the offensive end because they don’t know all the sets and plays yet, but they give us effort.”