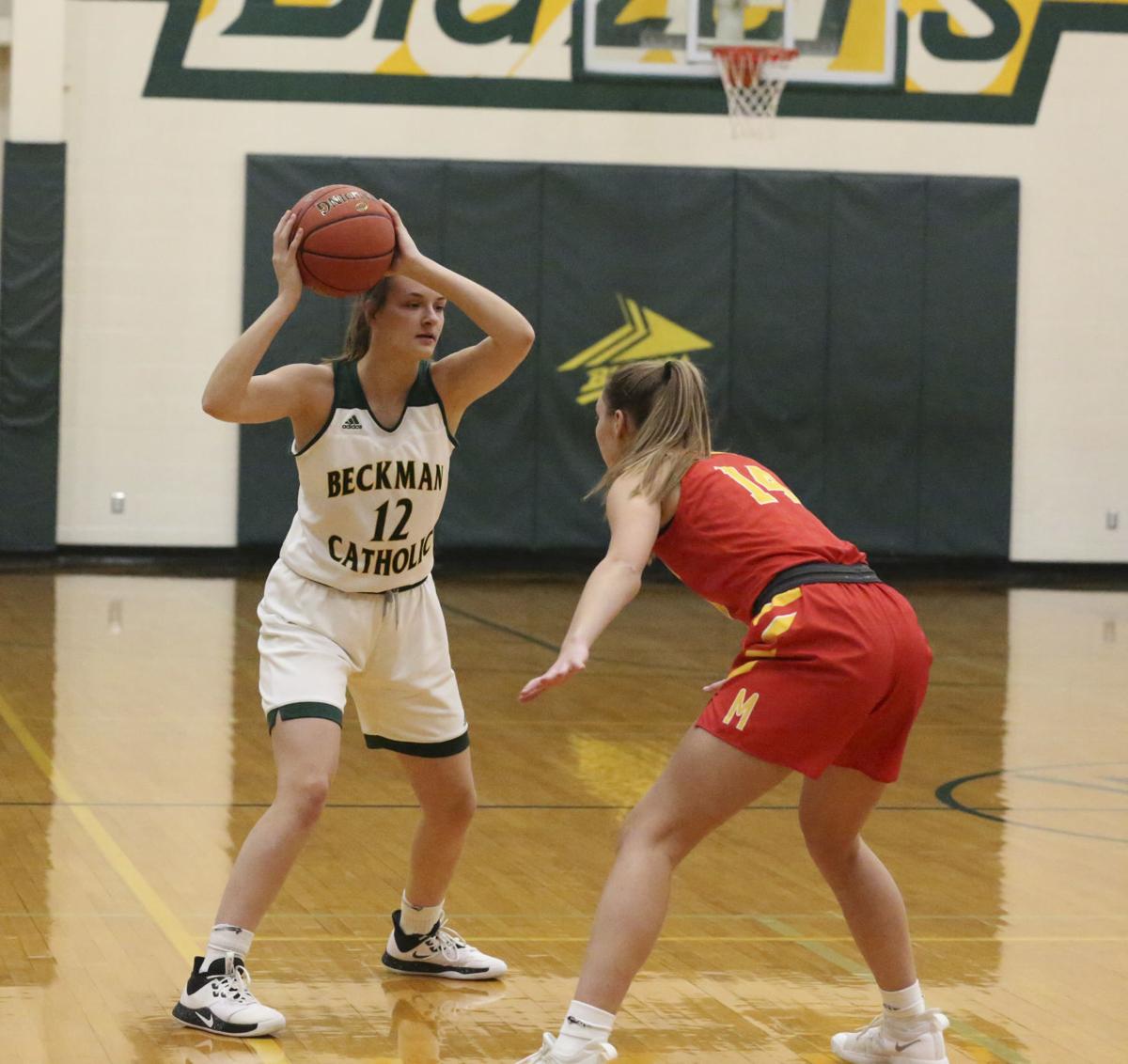 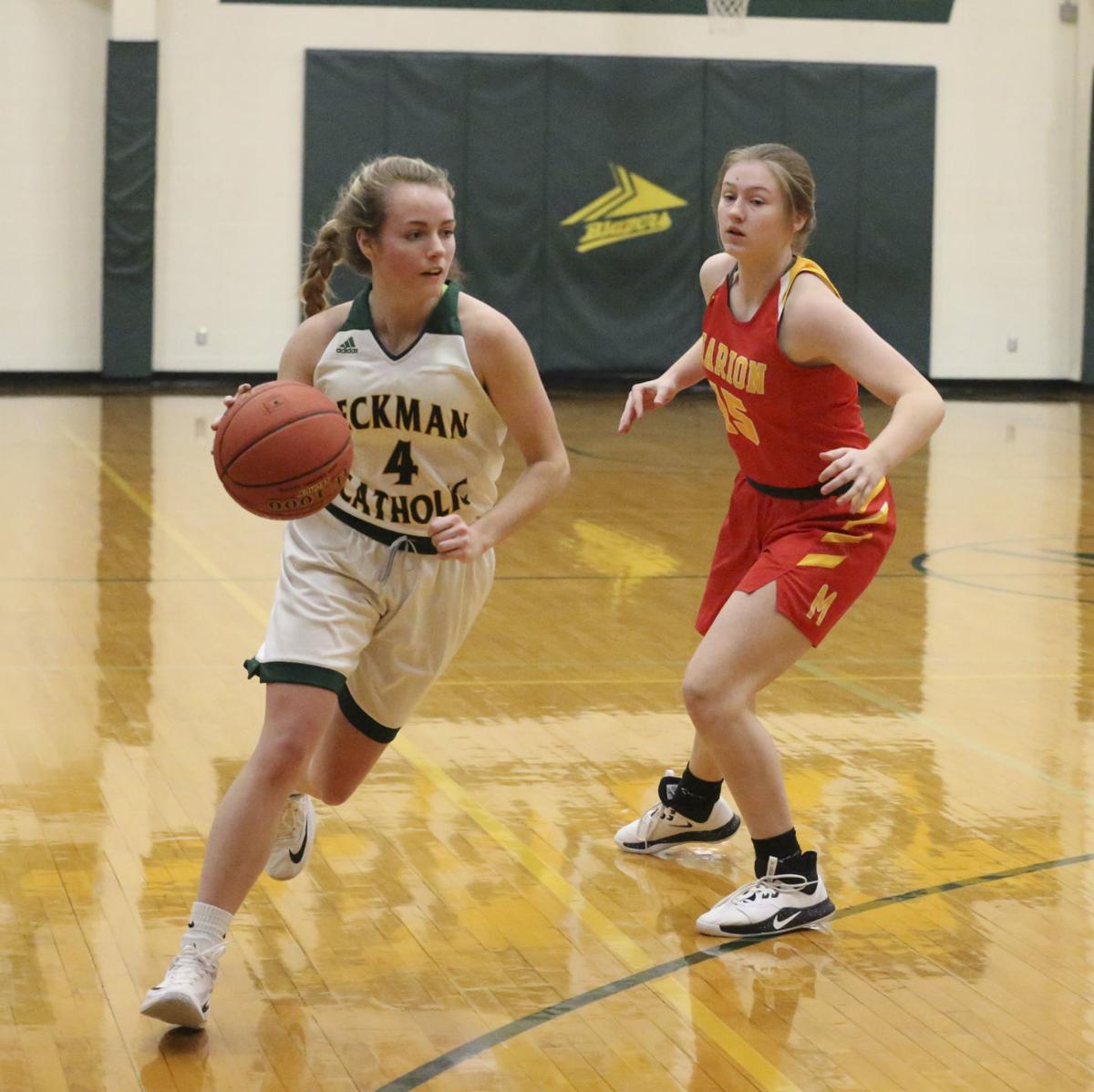 For a long while at Beckman Jan. 13, it looked as if the girls’ basketball team was going to break its losing streak. Instead, the Blazers added a game to make it five in a row, dropping a 49-42 decision to Mount Vernon.

Starting the game, the Blazers looked less than stellar. They spotted the Mustangs a 15-8 lead, getting baskets from Kennedy Arens (two) and Lauren Osterhaus (two). But then they caught fire. Osterhaus added a second-period opening trey, Paige McDermott put back a rebound and hit a lay-up and Arens made a free throw during an 8-0 run that gave them the lead, 16-15. A second three from Mount Vernon’s McKenzie Rentschler edged them ahead for a bit, but the Blazers answered with an Ashley Engelken jumper and two Arens free throws for a 20-18 lead.

A third Rentschler three took it back before Olivia Pirc responded with her under-the-basket score for a 24-23 lead. Makayla Koelker hit a lay-up with five seconds showing, then got two chances for the bonus when a Mustang was in the lane early. She missed both but Kristi Bries grabbed the rebound and converted for a 28-25 halftime lead.

Enter the third quarter, lately a wasteland for the Blazers. This time they stayed even, scoring eight points to Mount Vernon’s nine. But the extra one came from Summer Brand on a buzzer-beating trey and gave her the momentum to lead their scoring in the fourth quarter. She opened with a lay-up, followed by teammate Bethany Richardson’s putback for a 38-36 Mustang lead.

Osterhaus knotted the score with free throws and Arens put the Blazers ahead on a bunny, 40-38, but it would be the last tally for the team for a four-minute valley. Brand drilled a trey and lay-in, and Liz Dougherty added two free throws for a 45-40 Mustang lead and the beginning of the end. Keely Schmitt missed both sides of her bonus before Brand hit one-of-two, 46-40. Pirc missed the front of her one-and-one and Brand answered with a basket, 48-40. Arens finally converted both of her charity shots for the final Blazer scores, 48-42 before Brand hit another free throw in the last seconds.

Coach Chad Thomason was not happy. “They wanted it more than we did tonight. They were ready to play and they took it to us. I’m disappointed with our defensive effort. We need to pick it up on that side of the ball and we need to compete better.”

Add to story about Mt. Vernon in server:

Class 4A No. 2 Marion visited Beckman Jan. 14 and displayed the reason they are one of the top teams in their class. They dismantled the Blazer girls, 83-36.

After the Indians broke to a 7-0 lead from the first lay-up, the Blazers got two quick baskets, from Arens and Osterhaus, to cut the margin to 7-4. The Indians answered with their own five points and led 12-4. That set a pattern for the rest of the frame, one the Blazers trailed 24-12 at its end.

It was 47-21 at halftime and the continuous clock began midway through the third quarter when Indian Sadie Struchen drilled a trey to lead 60-24.

Thomason added, “This was a tough one tonight. It will be when you go against the top team in Class 4A. I thought our girls matched their intensity but Marion had spurts where they scored a lot of easy baskets. We need to play smarter and work harder on the boards.”