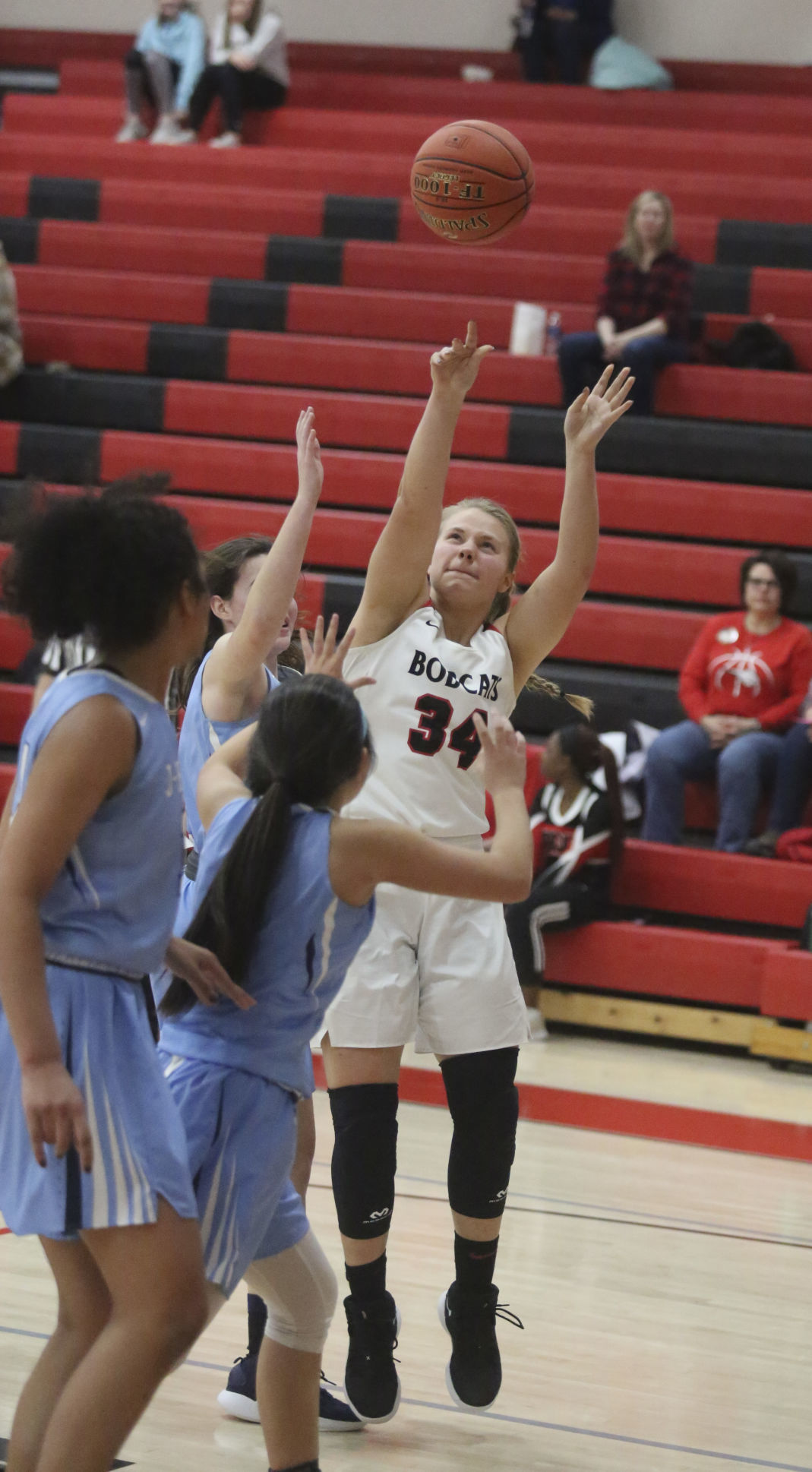 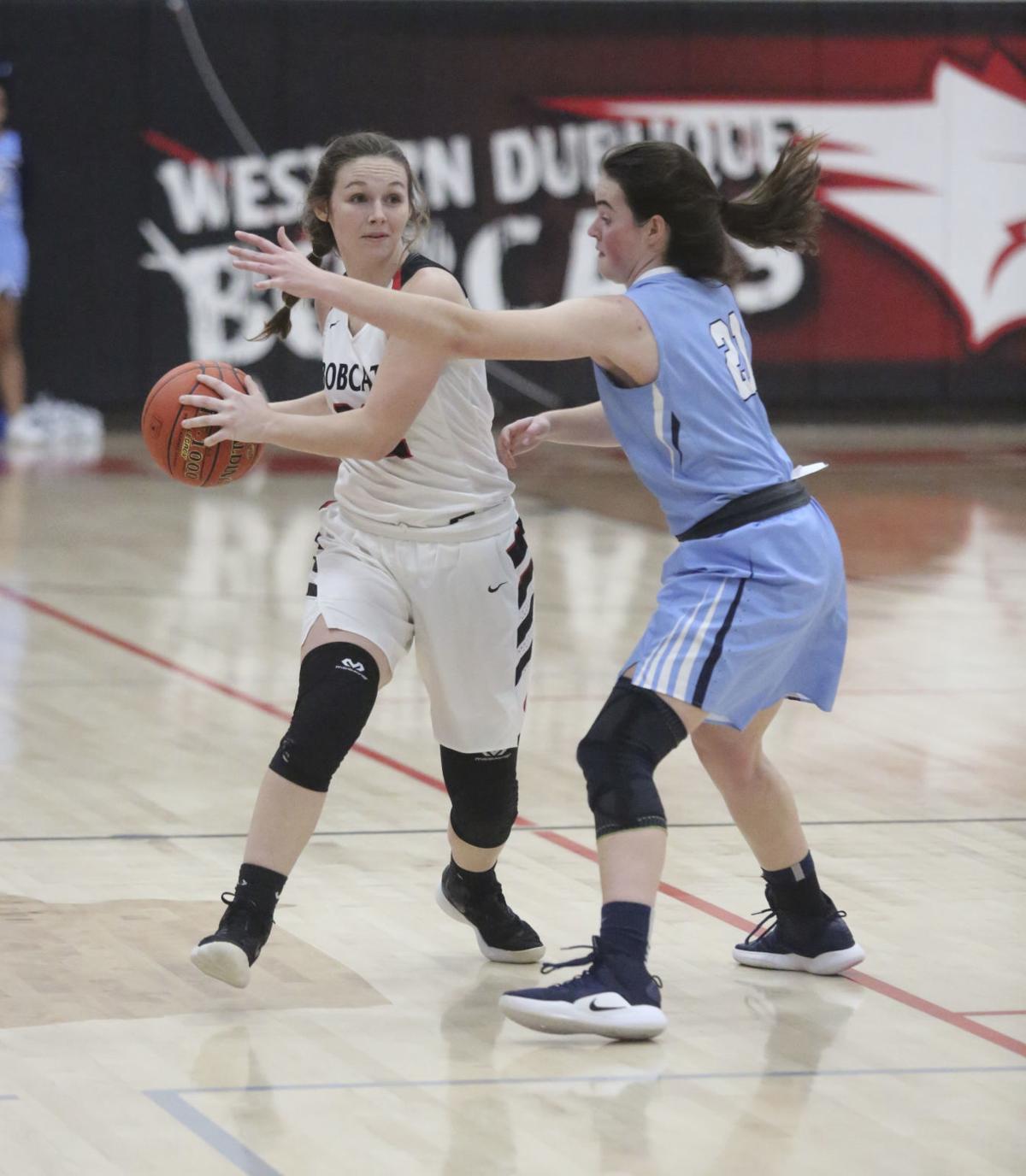 Having experienced players on the floor at crunch time is often the difference between winning and losing. That was especially true during Western Dubuque’s 50-42 win over Cedar Rapids Jefferson, in Epworth, Jan. 14.

Senior post Emma Giles scored 15 points and grabbed 15 rebounds, and senior forward Ashley Costello added a double-double of her own, with 10 points and 10 rebounds, to lead the Bobcats to a much-needed Mississippi Valley Conference win over the cold-shooting J-Hawks.

“Both teams wanted a win and needed a win,” said Western Dubuque coach Amy Ostwinkle. “We’ve had stretches where we have played some tough teams and you’re really battling and getting a little frustrated, and that can lead to mistakes, but it was good to get a win. We needed it for confidence.”

Ostwinkle got a big effort from her team defensively and on the boards, as the Bobcats limited Jefferson to 26 percent shooting (15-of-58) and dominated the glass, grabbing 41 rebounds — 14 of those offensive — to 22 for the J-Hawks.

Jefferson came to play, and behind the work of senior post Arianna Hawkins, led 12-10 after a quarter. A three-pointer by Maddy Maahs tied things up at 14-14 midway through period two, and after another Maahs jumper put the Bobcats up two at 18-16, Gile drove for a score to put her team up by four.

Jenna Fiedler’s three-ball with less than a minute to go in the half gave Western Dubuque its largest lead at 24-19, and Gile scored as time expired to send the teams to the break with the Bobcats in control at 26-19.

Gile scored again inside on the first possession of the third period and Costello’s jumper put the Bobcats up by double-digits at 30-19. Jefferson then got back in the game when Western Dubuque went over three minutes without scoring — with unforced turnovers a factor — to narrow the gap to four, 30-26, before Gile’s follow made it 32-26.

“I told the girls we caused ourselves a lot of our turnovers,” said Ostwinkle. “Both teams were in a hurry, and if we can just slow down and understand we don’t need to rush against a team like that, we could have easily expanded the lead in the second half.”

After the J-Hawks narrowed the gap to one, Sierra Hill’s putback made it 34-31, and another Costello jumper ended the quarter at 36-31.

Scores from Costello and Gile saw the Bobcats stretch the advantage to 11 points, 42-31, before a Maddie Harris jumper with 2:35 remaining maintained that gap.

Western Dubuque went 6-of-8 from the line the rest of the way to secure its second MVC win of the year. The Bobcats shot 17-of-40 from the field (43 percent) on the night, and converted 14-of-23 free throws (61 percent). Freshman Madie Denlinger led Jefferson with 13 points, while Hawkins added 11.

“Ashley’s shot tonight confidence-wise was so good, and Emma has been our reliable one this year,” she said. “Sierra’s passing and her understanding of our defense — she’s always on one of their best offensive players.”

“There are games you know you need to get and this was one of them,” said Ostwinkle. “I told the girls to enjoy it but there are some things we need to sharpen up.”

Two nights later at Wahlert, things didn’t go nearly as well for the Bobcats, as the Golden Eagles beat Western Dubuque for the second time this season, Jan. 16.

“We can learn a lot from this game. We need to focus on being more disciplined on both ends of the floor,” said Ostwinkle. “Credit to Wahlert — they shot the ball very well.”

Wahlert converted 26-of-48 (54%) from the floor, with 11 three-point baskets, while limiting the Bobcats to only seven field goals on the night. Wahlert’s pressure also forced 26 Western Dubuque turnovers.

“Our girls will continue pushing to get better so we can be playing our best in February,” added Ostwinkle.