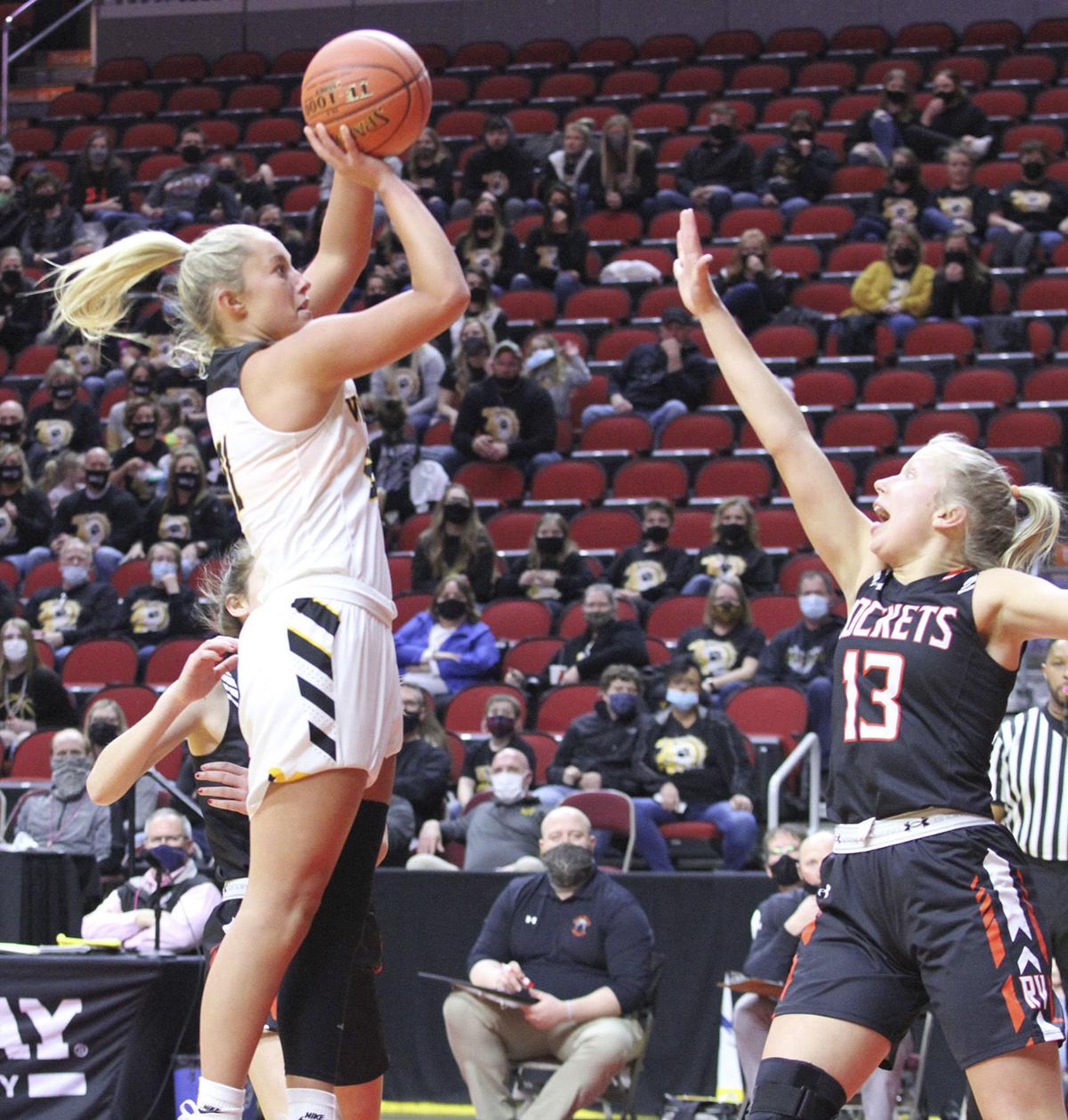 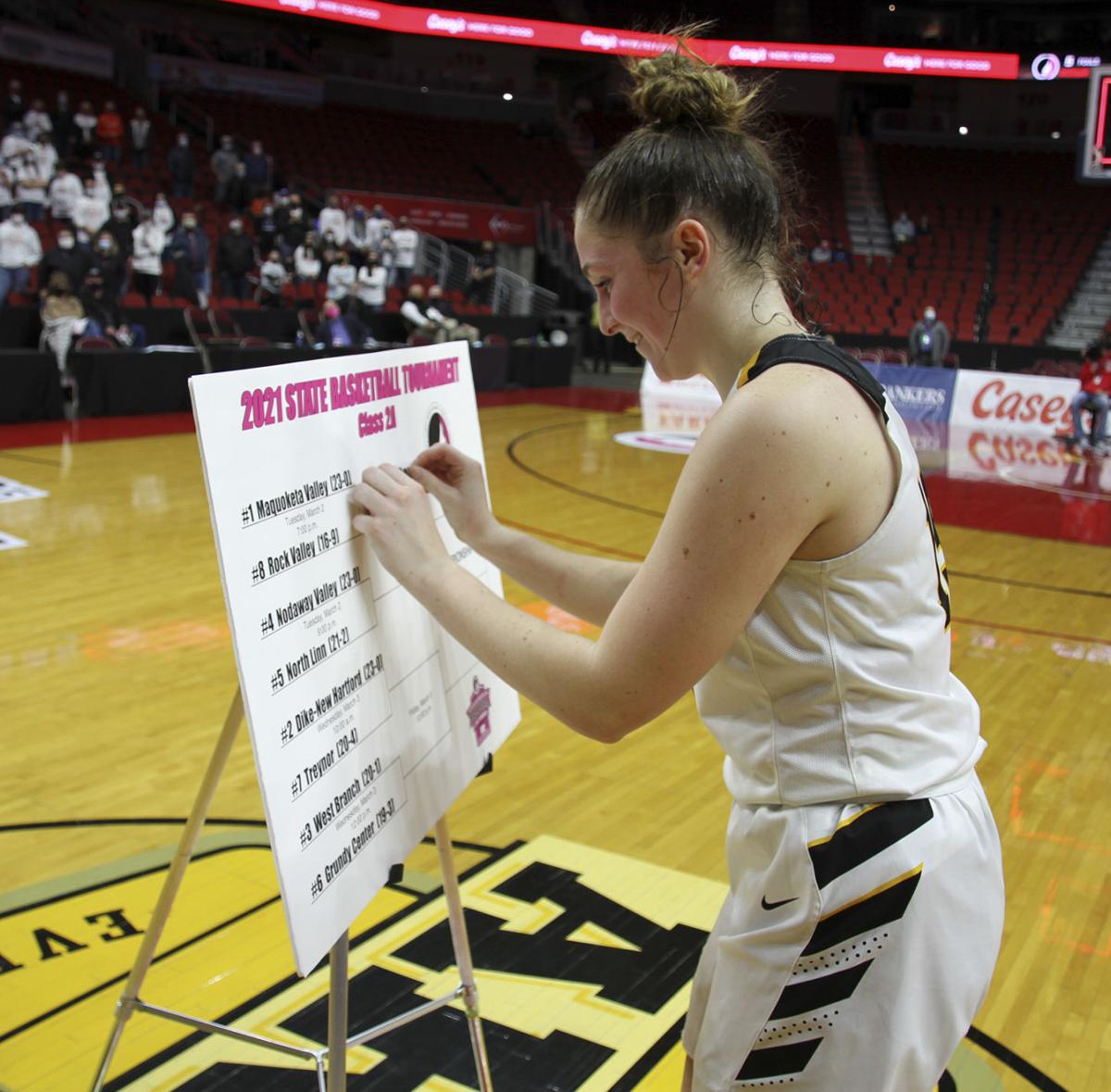 Ella Imler enters her team on the state semifinal bracket after a win over Rock Valley.

Ella Imler enters her team on the state semifinal bracket after a win over Rock Valley.

Nerves, tightness and tension can be expected when you step on the floor for the state tournament. The Maquoketa Valley girls’ basketball team pulled together after a rough first quarter against Rock Valley, March 2, to win 51-35 and advanced to the Class 2A State Semifinals against No. 4 Nodaway Valley Friday.

This was the first time since 2013 the Wildcat girls had qualified for the state tournament.

Rock Valley adjusted to the big stage early, putting up the first six points. Emerson Whittenbaugh finally got the Wildcats on the scoreboard at the 5:20 mark. Kennedy Rausch followed with a three to get them within three, but it was the Rockets who took a 15-5 lead into the second stanza.

“We just came out tight like we hadn’t played the game before. Dropping the ball out of bounds, picking balls up in bad spots, throwing it in their hands,” coach Scot Moenck said. “We didn’t shoot the ball well or locate their big kids early.”

Taya Tucker didn’t mince words, “We got in panic mode to start the game, rushing the passes, something we do not normally do. We turned the ball over and that is what got us in the hole early. Coach Moenck told us to relax, the balls are going (to go) in and we will start shooting better. Then we started believing in ourselves and getting off shots. When we get down early, we know we have to come back and push it and not get frazzled and understand we just have to come back that much harder to get the win.”

Starting the second quarter, the girls played the way they have all season. All five starters got their shots to start falling with senior Ella Imler taking control. After hitting a jumper for two from the top of the key, she stole the ball from a Rockets player and dished to Whittenbaugh who drove for a three-pointer putting the Wildcats down 15-10. Imler, on their next possession, drained another three to bring them within four causing Rock Valley to call a timeout. But the Wildcats took over the final two minutes with a three-pointer from Rausch and two deuces from Kylie Chesnut and Taya Tucker putting the Wildcats to trail by one at the half.

“When we go into halftime, we always know they are going to come out and be heavy on us and pressure us, we know what is coming and know how to be prepared as we had done it thousands of times at practice,” said Whittenbaugh.

That mental reset proved valuable. The Wildcats controlled the third and fourth quarters only allowing 14 points in the second half. The third quarter offered a highlight reel for Imler, scoring 11 of her team-high 20 points, with a trio of three-pointers and a two-pointer down low. With 1:39 left in the third Tucker created one of her team-high three steals and took it down the court for the layup.

Moenck marveled at Imler’s dominance, “She’s good, she is a warrior, she never gets tired. She actually rolled her ankle early and she told me to leave her alone and walked away. She is like my kid, all three seniors are, they are just warriors.”

“We came out in the first half a bit tense, so we took a deep breath during halftime and knew we had to come out to a better (second half) start and that is what we did,” said Imler.

The Wildcats outscored the Rockets by 12 to take a comfortable 37-26 lead into the fourth. The Rockets had to resort to fouling the Wildcats at the three-minute mark, and solid shooting at the line helped propel the Wildcats to the win.

“We had played 23 games so far this year, we just needed to get in the flow of things and relax, that was the biggest thing,” Imler said.