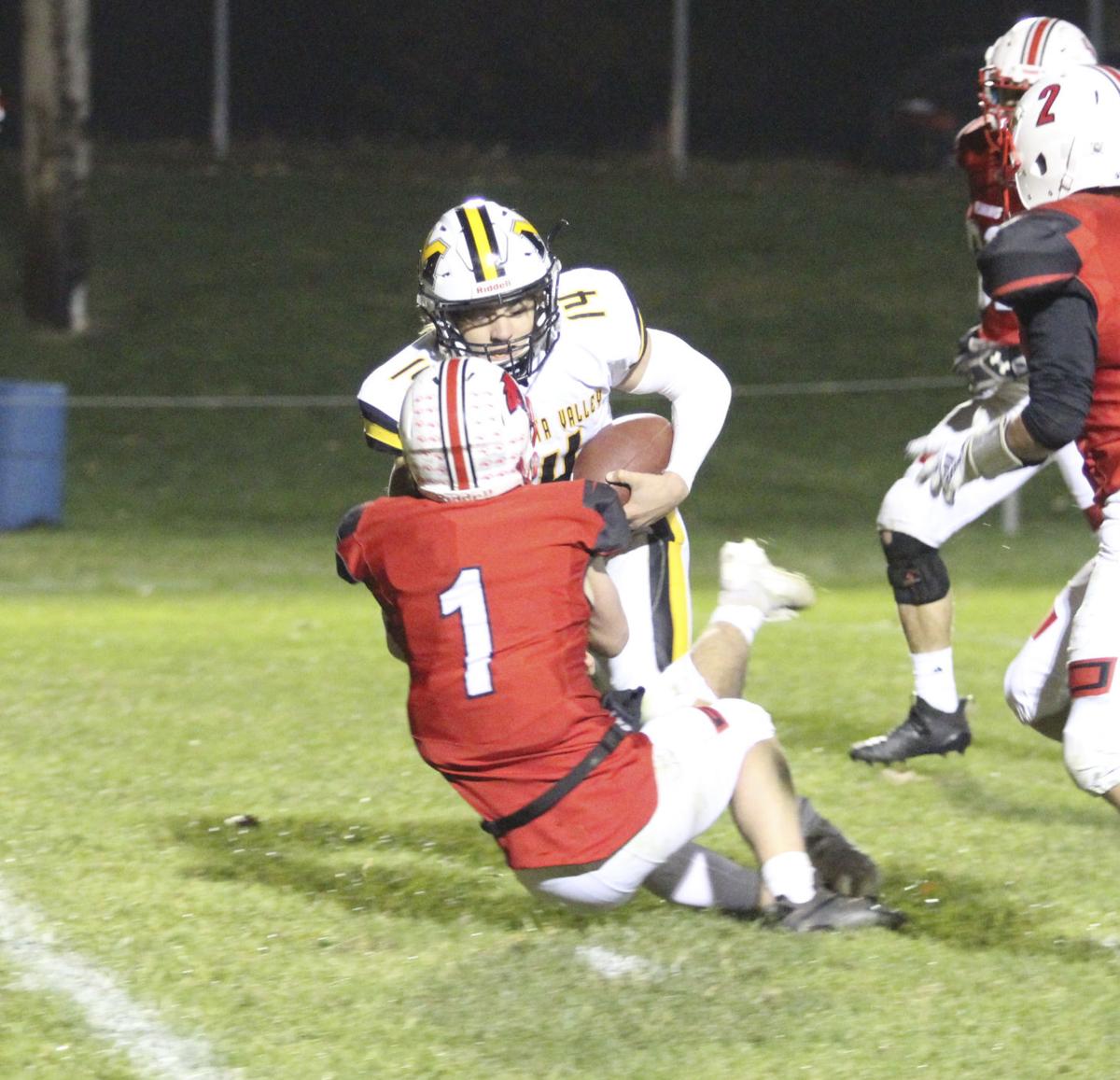 Quarterback Parker Sternhagen lowers his pad level and sticks it to the defender. 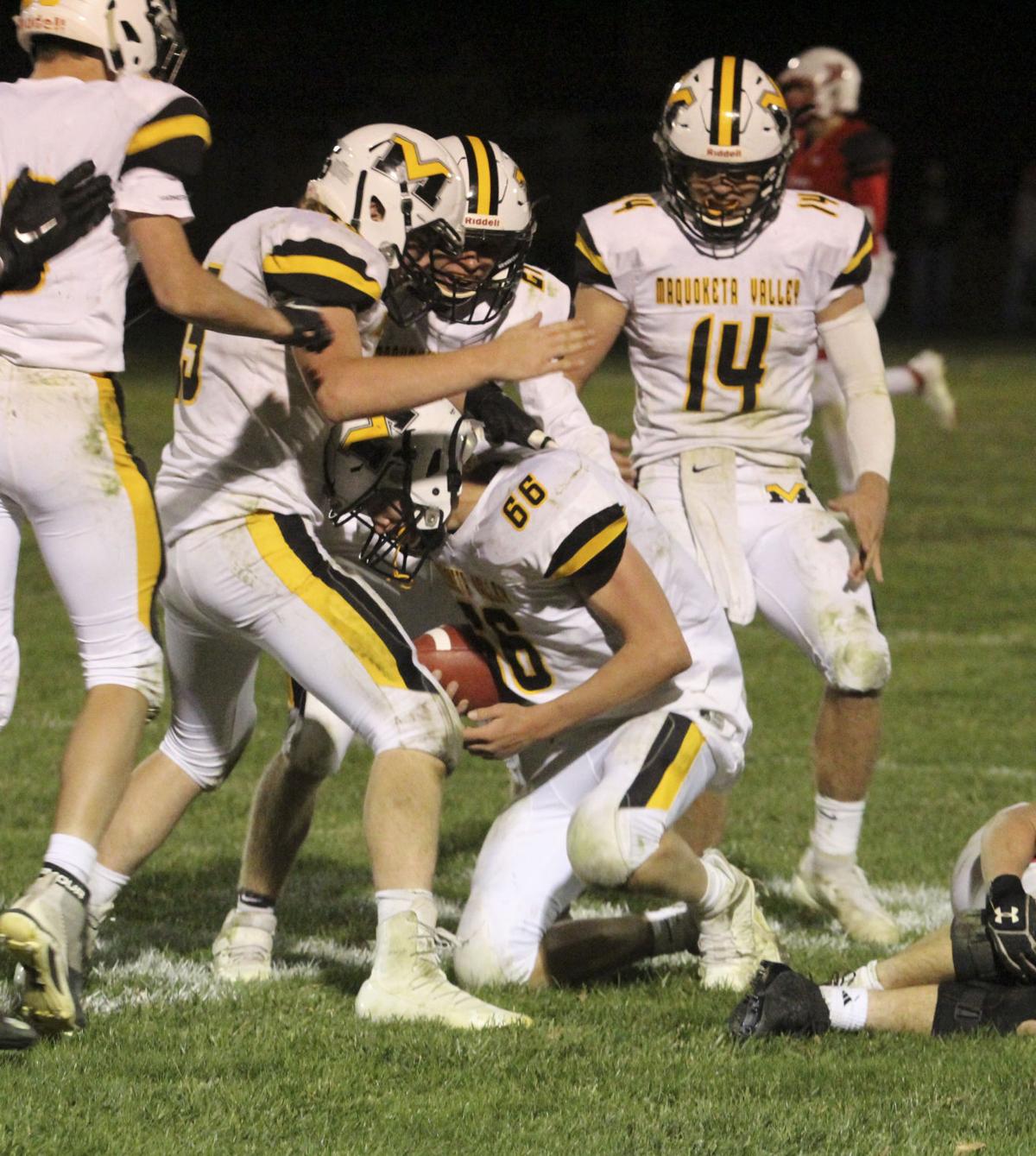 Quarterback Parker Sternhagen lowers his pad level and sticks it to the defender.

Points were plentiful Oct. 16 as Maquoketa Valley traveled to North Tama for their first-round playoff game. A fast-paced, high scoring affair resulted in the Wildcats defeating the Redhawks, 56-46.

After a good opening drive by the Wildcats, running back A.J. Ambundo got the scoring started with a receiving touchdown. The defense stood on the Redhawks’ possession and gave the ball back.

During this drive, on a run up the middle, running back Zach Digman sustained a gruesome leg injury that required medical crews and the on-site ambulance. After a lengthy break, play resumed and Ambundo broke a 32-yard touchdown run to extend Maquoketa Valley’s lead to 12-0.

North Tama figured it out on their next drive and quickly found the end zone. Wide receiver Cale Bradley hauled in a 12-yard touchdown. Following a two-point conversion, the Wildcats’ lead was down to four, 12-8.

Before the end of the first quarter hit, Maquoketa Valley quarterback Parker Sternhagen crossed the goal line for his first touchdown of the game. After 12 minutes of play, the Wildcats led the Redhawks 18-8.

“We were back to a starting offensive line that we have worked with as a group more so than we have the last couple weeks,” head coach Trevor Arnold said. “That helped a lot. That experience upfront allowed us to get back to some of the schemes we had to get away from due to lack of experience upfront.”

Two and a half minutes into the second, North Tama quarterback Gabe Kopriva scrambled in for an eight-yard touchdown. Another successful two-point conversion pushed the deficit to 18-16. Maquoketa Valley continued to answer as Sternhagen found the end zone for the second time. The two-point conversion went for the Wildcats and their lead was back to 10.

Kopriva continued to go punch for punch with Sternhagen. The following drive, he scored again on the ground, this time from five yards out, to make it 26-24. Ambundo wasted no time getting back in this shootout as he got into the end zone for his third touchdown of the half and again extended Maquoketa Valley’s lead, 34-24, at the half.

“We have had one or the other (Sternhagen or Ambundo) but hadn’t had a game where both guys were able to have a huge effect on the defense on the same night,” Arnold said. “Parker and A.J. are both great athletes that we just need to give them a little room and they are dangerous. The one-two punch should cause defensive stress especially when we move A.J. around to different alignments and we send him in motion.”

A quiet third quarter only saw one score and it came from North Tama. Kopriva snuck in a one-yard touchdown and cut the Wildcat lead to two again.

The floodgates reopened in the fourth. Less than a minute into the frame, Sternhagen scrambled his way 57 yards for a touchdown to push the lead back to eight. But it was a case of ‘anything you can do, I can do better’ as Kopriva answered a minute after that with a 57-yard touchdown run of his own, and the lead went back to two.

Pace slowed a little until halfway through the quarter when Sternhagen found the end zone for his fourth touchdown of the game. The two-point conversion was good and the lead was 10 with 6:31 to play.

Ironically enough, a defensive play helped the Wildcats seal the game. Freshman Aidan Salow picked off Kopriva with under six minutes remaining, and Maquoketa Valley was one score from icing the game.

Driving down the field, the Wildcats found themselves in a third down and 23 situation. Sternhagen made something out of nothing and picked up an improbable first down with his feet.

“The defense completely over pursued and nobody stayed home on the backside,” Arnold said. “He has great vision to see those things and make teams pay when they do. It was a big play for us when we needed to keep the ball and keep scoring.”

Sternhagen punched in his fifth and final touchdown a few minutes later and Maquoketa Valley won the game 56-38.

Junior Tanner DeMoss had the lone sack of the game for Maquoketa Valley. Ambundo led the team with nine tackles and tallied an interception.

The Wildcats now travel to Lisbon for their second-round matchup with the Lions. The Lions went 6-2 this year and averaged 37 points per game.