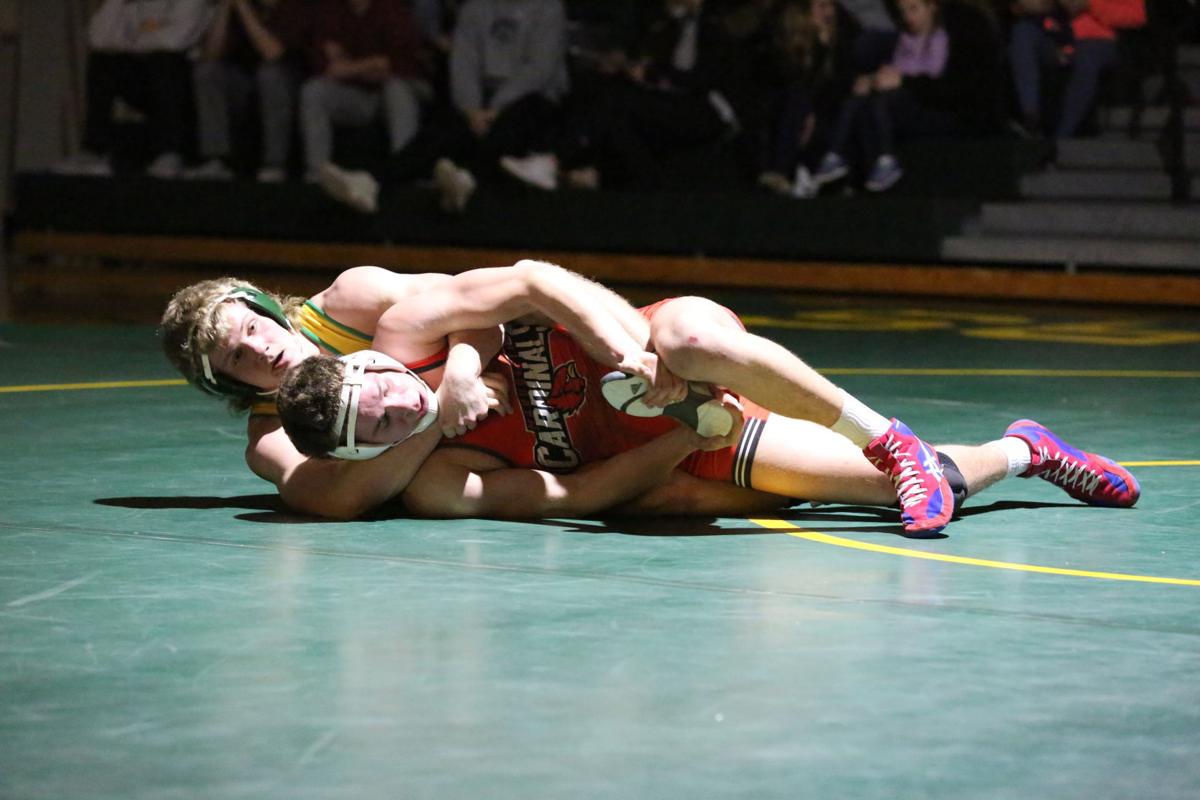 Evan Wulfekuhle celebrates his Senior Night with a pin at 195 of Liam Aunan Jan. 23. 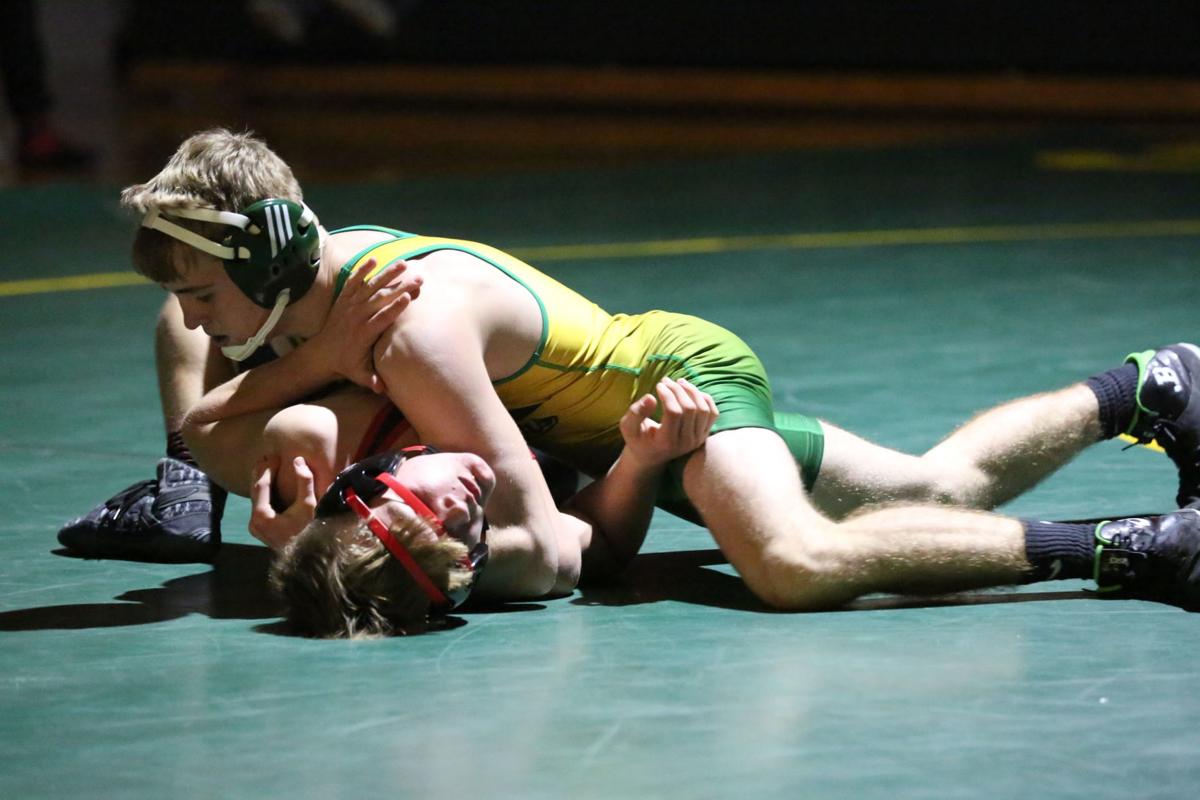 Nick Hageman takes firm control of his match at 138, winning by fall in 3:05 over Maquoketa’s Curtis Schabacker, Jan. 23, at Beckman.

Evan Wulfekuhle celebrates his Senior Night with a pin at 195 of Liam Aunan Jan. 23.

Nick Hageman takes firm control of his match at 138, winning by fall in 3:05 over Maquoketa’s Curtis Schabacker, Jan. 23, at Beckman.

Evan Wulfekuhle (Class 1A, No. 5) claimed the 182-pound championship over Class 3A’s top-ranked Jake Hosch, of Western Dubuque, in a close 3-2 decision Jan. 20 at the Cascade Invitational to help his Blazers to third place in the team race. (In the latest rankings, released Jan. 23, Wulfekuhle moved up to No. 4 in Class 1A, while Hosch dropped to No. 4 in Class 3A).

Wulfekuhle’s win was set up when he pinned his first two opponents, Senior’s Dashawn Tigges (1:25) and Wahlert’s Bryce Anstoetter (5:52), to reach the final match with Hosch.

Coach Cody Ortman explained, “This was a huge win for Evan. He wrestled a smart match and stayed in good position the whole time, which added to the excitement of the match. I am very happy that he got the win against a prominent opponent. That adds to his confidence, but we do need to get a little more offensive in those matches to build a lead. Keeping it close to the very end can be dangerous wrestling.”

Bennett English, back in the line-up at heavyweight, claimed third, as did Mason Recker at 145 and Danil Wall at 120. Fourth went to Levi Feldman at 126 and Connor Grover at 152. Alex Hageman (113) placed fifth and Ty Fangman (170) sixth.

Ortman added, “Bennett saw his first match of the year. He showcased all the hard work he has been putting in to get back into the line-up this year. He is very powerful and explosive when he decides to go and he proved that in some of his takedown finishes.

“Up and down the line-up our kids saw some tough competition in one round and competed hard but there are some things we need to shore up. I feel like there were more takedowns we lost that we won. Our technique needs to be crisp in that area, bottom line.

“We took third in a tournament with a lot of tough teams. Of the 12 wrestlers we took, 10 placed in the top six. There were definitely some matches we wish we could have back and some we needed just a little bit more time, but that’s what it’s all about, learning from our mistakes to come back even stronger.”

The Blazers took that lesson to heart in a Senior Night match-up Jan. 23 with Maquoketa, when they handed the Cardinals a solid 55-22 WaMaC defeat.

Grover started things off at 152 with a pin of Jacob Pawloski (2:00) before frosh Ryan Funke won his first varsity match with a 6-2 decision over Jaycob Thompson at 160. Will Lemke wrestled 170 and fell to Abe Michel before Fangman, up at 182, pinned Erik Truesdale in just 1:14. Wulfekuhle, up at 195, did the same to Liam Aunan (5:52) after gaining a bevy of points on the Cardinal. Forfeits at 220 and 285 evened the scored some, 21-18, but Schmidt got things back under control with a quick pin of Jade Armbruster (0:38) after already handling her with three takedowns. Alex Hageman received a forfeit and it was 33-18. Wall major decisioned Levi Livermore (16-2) and Feldman got another forfeit, 43-18.

After Schmitt dropped a 9-1 decision, Nick Hageman controlled Curtis Schabacker and put him on his back several times before ending it at 3:05. Mason Recker closed the varsity match with a fall over Gabe Gardner (1:20).

“This was another great night of competition and one for recognition of our seniors,” added Ortman. “I think Beckman Catholic wrestling has arrived. Tonight was definitely the most determined and methodical we’ve seen the kids wrestle all season. The environment in the gym was energetic and the kids fed off it. The ooh’s and ah’s motivated our guys to bring the diesel every time we had somebody step on the mat. This meet was about protecting our house and sending off our seniors in the best way.

“Since Monday’s meet, this team has jumped leaps in regards to improvement on mat tactics. Each kid was aggressive off the whistle and the execution of our offensive attacks was more crisp than at Cascade. I think this was the first night we saw the kids compete the way we always believed they could. Through the year these kids have been molded by the fire and sharpened by steel and we have had our ups and downs for sure, but with what we saw tonight, our only direction is going forward.”

Four wrestlers went 4-0 on the day: Schmidt, Wall, Feldman and Evan Wulfekuhle (recorded the fastest pin — 0:16). Four also were also 3-1 — Alex and Nick Hageman, Recker and English. Grover was 2-2 while Schmitt, Nick Wulfekuhle and Fangman were 1-3.

Ortman added,“We saw some tough competition today, especially the first dual against New Hampton/Turkey valley where it came down to the final match. In that dual alone, I feel we grew together the most as a team. It all started with our heavyweight Bennett English who dominated his match. He set the tempo for the team. Nick Schmidt followed with a controlled pin and Alex Hageman got a big pin for us. He is starting to break through and has developed so much since the start of the year. Then Danil and Levi imposed their will on their opponents to bring us ahead in team points.

“New Hampton is a tough team and the competition created some pressure, some high stakes. I feel some of our guys let it get to them a little. I’m glad it happened now so we can grow from it, rather than in the post-season. We need to trust in the fundamentals and not get frustrated when the first move doesn’t work. Sometimes it takes a fifth or sixth attempt to work so we need to be persistent.

“But during the rest of the day, I liked how we picked ourselves up and finished strong. Guys like Mason and Conner suffered tough losses but came back, learned and got the win at the end of the day. These two are tough as nails and lead by example.

“Slowly but surely we are showing everyone that Beckman Catholic wrestling is a tough contender and we’re only going to prove that more Monday (Jan. 26) in our home dual against Bellevue, Clayton Ridge and Maquoketa Valley.”